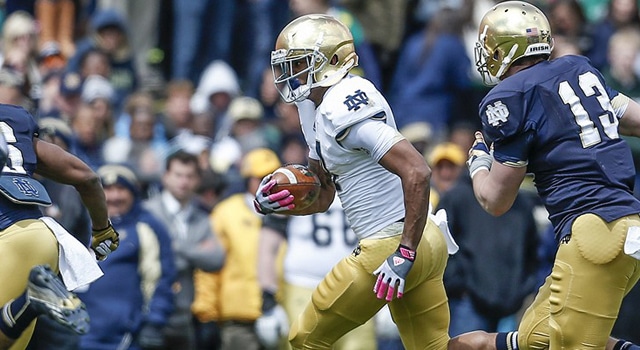 Brian Kelly and the Irish opened camp early last week, and he took the time to address an off-seasons worth of questions during his initial press conference just a few days before camp broke. Kelly talked about the mindset of the team and of the staff , and where they feel they are at right now “We are like everyone else in college football right now, we’re just extremely excited about starting the season”. Kelly also spoke about the resurgence of Fighting Irish football “For us here at Notre Dame, we have worked very hard to put ourselves into a position to get back into the national spotlight, and we have no intentions of giving that up”

While there were a litany of questions that needed to be addressed, the one Kelly seemed most excited to talk about was the current state of the Notre Dame backfield, and where he thinks all the pieces will fit in. There was absolutely no reservation in his voice what so ever in the fact that George Atkinson is the best of the bunch(right now), and that Cam McDaniel has impressed the coaching staff an awful lot, at least from watching film from 2012.

Kelly later talked about some of the other candidates in the backfield who have limited to no experience at all, saying “We know we have some talented young men that have great resumes, but we are going to have to see how they play when it comes to college football” followed up by “The guys that are capable of helping us win, we will find a way to get them on the field and get them touches”.

Behind the expected starter in Atkinson, and Cam McDaniel, that Kelly already spoke of, he and his staff will be relying on an injury prone Amir Carlisle, a bruiser of a back in Will Mahone, and 2 inexperienced but very talented freshmen in Greg Bryant and Tarean Folston. As Kelly referenced during the press conference, there are some talented players, but it will be incumbent upon each individual to show he and his staff why they should see the field.

With the losses of Cierre Wood and Theo Riddick, Kelly loses an awful lot of production from last year, which includes 304 rushes,1659 rushing yards, and 9 touchdowns to be exact. If one looks deep enough though they will see that Atkinson actually had a higher yards per carry average than both Wood and Riddick(7.1), and the same amount of rushing touchdowns as Theo Riddick(5), and did so on a 139 less carries for the year.

Kelly and his staff seem to be approaching the season with a one game at a time mentality, which based of some of the scenarios the Irish are facing in 2013, seems like the smart choice. We know that as of now barring any type of injury George Atkinson will hit the field with the first team offense against Temple on August 31st, after that the picture is still a little unfocused. The starting tailback position is obviously Atkinson’s to lose at this point, but Kelly emphasized that if a kid has the earned the right to see the field, he and his staff will find a way to make that happen – in some form or another.

The Irish backfield will benefit from what most expect to be a very strong offensive line in 2013, and that  should help in the development of the inexperienced group. If you include the entire group of backs, there are just a combined total of 74 carries from 2012, and for those looking for absolute answers in the backfield before game one will likely be disappointed. The Notre Dame running game will be a work in progress early, but the picture should be much clearer before the Irish face the daunting task of playing Oklahoma, Arizona State, and USC over a 3 week period starting in late September to mid-October.