The University of Notre Dame announced the first major renovation to Notre Dame Stadium since the stadium expansion that was completed in 1997 earlier today.  The renovations are part of a massive building project – the largest in the 172 year history of the University.

There are a ton of details available on an excellent microsite that Notre Dame launched today including a full press release that you can read here.  Here are some highlights of the project as well as my thoughts.

Now onto some of the main questions everyone has.

Will there be jumbotrons following the renovations?

We don’t know yet.  Here is what Notre Dame is saying now with regards to jumbotrons.

Our fans, especially our younger fans, have been clear in communicating their strong desire to have better access to data and video when attending our games—a view that has been reinforced by their experience in other stadia when we host our Shamrock Series games. Some of that will be addressed through enhanced broadband connectivity in the stadium and some by the introduction of video, but the shape that will take has not yet been finalized. However, to the extent we provide video—whether in the concourse or in the stadium itself–similar to the philosophy in Purcell Pavilion and the Compton Family Ice Arena, there will be no commercial signage or advertising.

Soooooo you’re saying there’s a chance?  No one knows yet, but in the rendering below, there is an awful lot of room to the left and right of the scoreboard that very easily could be filled in with a full video screen.  It is important to note though that Notre Dame has said there will not be any advertising inside the stadium. 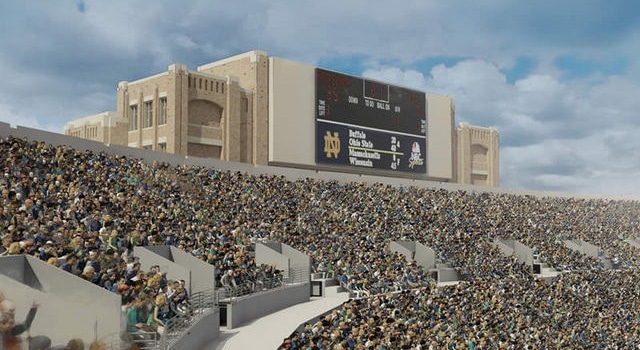 We are going to have to wait a little while to find out whether or not there will be video boards in the stadium though.

What about field turf?

There were not any announcements on the field surface either, but we should be finding out about that soon too.

No decision has been made at this time on the playing surface. We anticipate a decision being made in the near future.

How will gameday be impacted for Notre Dame home games during construction?

The University said that gameday will be impacted, but not drastically and the impact will be similar to that of the last renovation in the 90’s.

There may be some minor inconveniences, and the area will be a construction zone during the seasons impacted by the project, but home games will go on as scheduled at Notre Dame Stadium. The scene likely will be similar to the expansion in the 1990s when construction was ongoing on the upper bowl and new press box during the course of the 1996 football season.

Will the sound system in the stadium be enhanced?

I haven’t read anything mentioning any enhancements to the sound system in the stadium but with the investment the University is making to improve the gameday experience in the stadium I would be surprised if this wasn’t enhanced too – especially if video boards/jumbotrons are added at some point.  Perhaps we will hear more about this once a decision is made on video boards.

Will I be able to call or text anyone in the stadium once the renovations are complete? Or will my phone at least not die from searching for a signal for 3 hours?

It sounds like it.  Notre Dame has said it is enhancing broadband capabilities in the stadium as part of the project as noted above in response to video boards.

Will premium seating help get some of the down in front crowd out of lower and upper bowls?

We don’t know yet.  The east and west  buildings will have indoor and outdoor premium seating throughout levels 7-9 which could get some of the older crowd that prefers to sit at all times and not yell during big plays into the club seating.  Outdoor seating that high up though could be pretty cold when the November winds are swirling in Notre Dame Stadium though so who knows.

Why is Notre Dame adding all of the academic and student life features to the football stadium?

The main goal of the project outside of enhancing the stadium and fan experience is to give purpose to the largest building on campus more than 6 Saturdays a year.  Notre Dame Stadium is very centrally focused and Notre Dame wants to make it more of a focal point on campus and what better way than utilizing it throughout the year.  Turning Notre Dame Stadium into something that students get to access more than 24 times during their undergrad studies also will give students more of a connection to the largest building on campus.

Here’s a video explaining the project along with renderings of what the stadium will look like once complete.