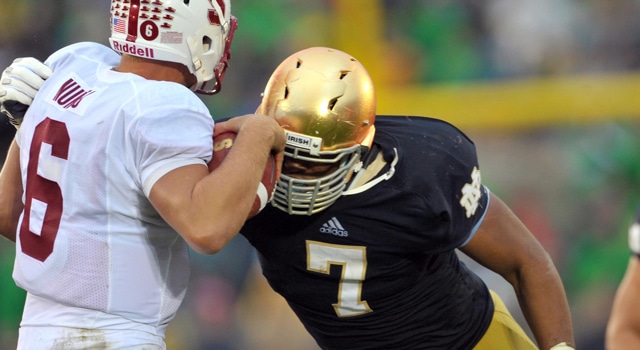 Zack is back again this week with a full position by position breakdown for this weekend’s contest with Stanford.

Notre Dame QB’s vs. Stanford Pass Defense: Defending the pass has been a weakness for the Cardinal this season as Stanford is ranked 103rd in pass defense. In four games they have allowed 300 or more passing yards and have only held two opponents below 200 passing yards with one being Army (first ranked rushing offense in the nation). They allow 259.0 passing yards a game and have allowed opponents to complete 63.0 percent of their passes with 17 passing touchdowns allowed and they have 10 interceptions. Tommy Rees has been able to complete long passes on many occasions this season and if he is able to spread the ball and consistently have a strong effort in the air, should have a strong game against a weak pass defense that Stanford has.

Stanford QB’s vs. Notre Dame Pass Defense: The Irish are 21st in the nation in pass defense and are allowing 205.6 passing yards per game and have allowed opponents to complete 60.4 percent of their passes and have allowed 17 passing touchdowns and have 7 interceptions. Kevin Hogan is a decent quarterback to go up against and one that is capable of running the ball as well. The Irish have faced quarterbacks who can run the ball in nearly every game this season and get a good challenge in this game out of Stanford.

Notre Dame RB’s vs. Stanford Rush Defense: Stanford has been quite impressive against the run with the 3rd ranked rush defense and allow just 89.5 rushing yards per game and for opponents to average only 3.0 yards per rush and have allowed 6 rushing touchdowns. Stanford has only allowed three opponents to rush for 100 or more yards with the most being 284 rushing yards from first ranked rush offense in Army and UCLA nearly had 200 rushing rushing yards with 181 rushing yards. The Irish have been strong in running the ball lately and should give Stanford a good challenge with the improving rushing offense.

Stanford RB’s vs. Notre Dame Rush Defense: The Irish are 69th in the nation in run defense and allow 167.5 rushing yards per game and allow opponents to average 4.1 yards per rush and have allowed 11 rushing touchdowns. Containing Tyler Gaffney will be important as he is the main focus of the Stanford rushing offense. The Irish have some depth issues up front with Louis Nix III out for the season and Kona Schwenke being limited against BYU, Jarron Jones did an excellent job filling in and was one of the best players on the Irish defense in the win over BYU.

Notre Dame WR’s vs. Stanford DB’s: TJ Jones and DaVaris Daniels were the top players for the Irish in the receiving game against BYU and give Stanford a challenge in one of the best receiving units that they face all season long. Notre Dame is capable of spreading the ball around very well and have many players who have caught long passes with two pass plays of 80 or more yards and five players overall have caught passes of 40 or more yards this season as well. With the weakness of the defense for Stanford being defending the pass, this gives the Irish receiving unit a good opportunity for a great game in this area.

Stanford WR’s vs. Notre Dame DB’s: The Irish have quite a few players to account for here. Ty Montgomery has been outstanding for Stanford and has made players in the receiving game, running game, and return game this season. Michael Rector has an impressive average per catch and is capable of big plays as well, and Devon Cajuste also has made an impact. Those three need to be accounted for at all times in coverage and Montgomery makes plays in running and catching offensively.

Notre Dame OL: The Irish will be without center Nick Martin, who suffered an injury that forced him to leave the game in the first quarter in the win over BYU, and is now out for the rest of the season. Matt Hegarty stepped in and did a great job and will start against Stanford and the bowl game. In terms of run blocking they are good with 156.7 rushing yards per game and an average of 4.6 yards per rush. Pass blocking has been a strength with 7 sacks allowed and the team has allowed 45 tackles for loss and 17 quarterback hurries.

Notre Dame OL vs. Stanford DL: Stanford lost a major part of their defense in senior defensive end Ben Gardner who still has the team lead in quarterback hurries with 9 and was good at getting sacks and getting into opposing backfields. Stanford has been very impressive in getting into opposing backfields with 84 tackles for loss, 34 sacks, and 44 quarterback hurries. While he is a linebacker, Trent Murphy with 19 tackles for loss and 13 sacks must be accounted for along with defensive end Josh Mauro with 10.5 tackles for loss and 4 sacks. Another battle in the trenches could go a long way in determining the result of the game as this is a very even match despite the loss of Ben Gardner for the season for the Cardinal.

Stanford OL: Run blocking has been a strength here with an average of 203.7 yards per game and 4.9 yards per rush. Pass blocking has been a strength as well with 10 sacks, 37 tackles for loss, and only 10 quarterback hurries allowed as well. The Cardinal have a very experienced offensive line with nearly all of the starters being seniors and have been consistently strong at this position for last few years now.

Stanford OL vs. Notre Dame DL: The Irish have been hit hard at the defensive line with Louis Nix III now out for the season, and Kona Schwenke wound up being limited for the Irish in the previous game against BYU, and Jarron Jones filled in up front and was one of the best players on defense for the Irish against BYU. The Irish have 16 sacks, 57 tackles for loss, and 42 quarterback hurries on defense. The Irish face one of the top offensive line units in the country and will need to be able to consistently get quarterback pressure and get into the backfield and make plays.

Notre Dame DL vs. Stanford OL: The Irish face an experienced Stanford offensive line that has been strong at both run and pass blocking this season. The injuries have mounted up front for the Irish and Stanford might have the best offensive line that the Irish face this season and are a big test for the Irish defensive line. Notre Dame will need to consistently get pressure and get into the backfield and make plays to shut down the run game and contain the passing game as well.

Stanford DL vs. Notre Dame OL: The Irish have one of the best offensive lines in the nation and have done well in pass and run protection. Despite Stanford lacking Ben Gardner, the Irish still face a challenge in this area. Notre Dame will need to be able to block well on every play as Stanford has been very good in getting into opposing backfields and making plays.

Notre Dame LB’s vs. Stanford: Stanford has a strong running game and others on offense that can make plays. One player to focus on with the offense is Ty Montgomery, as he has made plays on the ground as well. The Irish will need to account for him at all times. The running game in general needs to be accounted for as well.

Stanford LB’s vs. Notre Dame: While the linebacker unit is the strength of the defense, the most important player to account for is Trent Murphy with his ability to make plays in the backfield. Shayne Skov and AJ Tarpley also have to be accounted for with the amount of tackles they have as well. The Irish running game has been showing quite a bit of improvement recently and the tight ends will be important for Stanford to account for in coverage. This is interesting matchup that also can determine the result of the game.

Notre Dame DB’s vs. Stanford WR’s: Ty Montgomery is the best receiver Stanford has, but he isn’t the only one to account for with Michael Rector and Devon Cajuste making plays as well in the receiving game. Containing all three will be important in the receiving game, as they have the bulk of the receptions, receiving yards, and receiving touchdowns.

Stanford DB’s vs. Notre Dame WR’s: Stanford faces one of the most talented receiving units that they will face all season. With a variety of players who can catch long passes, and also having tight ends to account for in coverage can make things difficult in an area that has been a weakness in pass defense. The Irish should be able to pass on Stanford’s defense and make plays as well, and this could lead to things favoring the Irish with a balanced offense as well.

Everything Else: The Irish are coming off a great win over BYU and now head to Stanford for the final game of the regular season. Stanford has quite a few players on offense to worry about in Tyler Gaffney, Ty Montgomery, Devon Cajuste, and Michael Rector. The defense has a strength in the linebacker unit in general and especially in Trent Murphy, special teams are also big with Ty Montgomery being good at making plays on kickoff returns. The Irish need to establish the run early and pass the ball well against a weak pass defense. Being able to run on one of the best run defenses in the country is essential to stay in the game as well. Containing the playmakers on offense, defense and special teams as well will be important. The Irish will need to be able to put together long drives to keep the defense rested and also put points on the board as well.