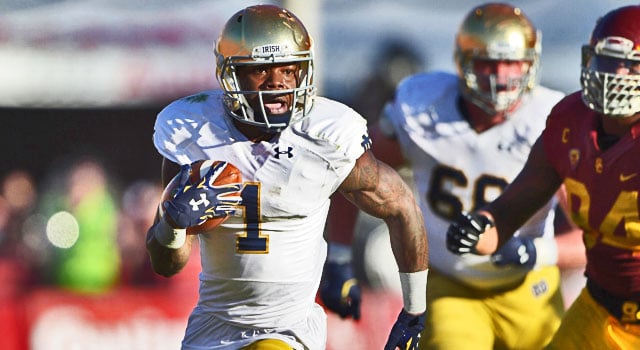 Notre Dame’s regular season came to a brutal end as they were flattened 49-14 by arch-rival USC.  The Irish were never in the game as the Trojans jumped out to a 21-0 lead after the first quarter and didn’t let their foot off the gas.  The Trojans were able to do whatever they wanted against the injury riddled Irish defense, throwing over the top of the defense with ease and running the ball with success.  Notre Dame’s offense continued its subpar play which led to Malik Zaire getting an opportunity to show what he can do.  The following players stood out in defeat for the Irish:

Greg Bryant:  When Greg Bryant gets carries he delivers.  Bryant has seen his carries limited as he is behind Cam McDaniel on the depth chart despite being a vastly more talented player.  Although Bryant did most of his work when the game was out of reach the Florida native rushed for 79 yards and a touchdown on only seven carries.  Bryant also did a better job of limiting his dancing around and getting the ball up field with authority.

Jaylon Smith:  The Irish defense did not look good against the Trojans but Jaylon Smith had another solid game.  Smith had a team-high 14 tackles to go along with a sack and a pass breakup.  The sophomore did struggle a bit in helping to align the defense which resulted in a lot of easy plays for USC.

Malik Zaire:  Although Malik Zaire didn’t look outstanding in his debut he did enough to make the quarterback controversy more legitimate.  Zaire completed less than 50 percent of his passes but threw for 170 yards and rushed for a touchdown.  He also showed good chemistry with Bryant in the backfield.

Nyles Morgan:  Freshman Nyles Morgan missed the first half of the game because of the carry-over of a targeting foul but still managed to register 11 tackles good for third most on the Irish and was also in on a tackle for loss.  Although Morgan struggled in space covering the athletic Trojan playmakers so did the rest of the Irish defense.