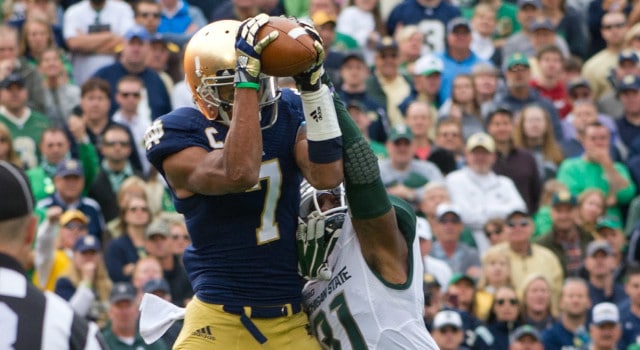 Notre Dame will host its biggest rival this weekend in a game that will go a long way in determining the direction of the season.  The Irish have had a disappointing start to the season but a win in a thriller over Arizona State renews some hope that the Irish can get things moving in the right direction.  The USC Trojans will have other plans though as they travel to South Bend looking to keep their momentum going.  Under interim head coach Ed Orgeron the Trojans appear to have their swagger back and with a renewed sense of confidence they are a dangerous team.  The following are the matchups the Irish must win to be successful versus the Trojans:

T.J. Jones versus Torin Harris:  Irish wide receiver T.J. Jones will need another strong showing this week when he faces USC’s number one corner Torin Harris.  Jones either leads or is tied for the lead in every major receiving category for the Irish and will need to make himself available to Tommy Rees early and often.  If Jones and Rees can get in a rhythm early the Irish offense will have much more success moving the ball.  Senior Torin Harris is tied for the Trojan lead in pass breakups and pass defenses this season and is in his first season as a full time starter.  Harris will have help shutting down Jones most downs but must not get beaten badly in one-on-one situations.

Zach Martin versus Leonard Williams:  Irish captain Zach Martin will be in for a very big test versus USC defensive end Leonard Williams.  Martin has done a solid job with an offensive line in transition in a couple of key positions and has protected Tommy Rees quite well.  This week Martin will face his toughest test so far in Williams.  Everything the Trojan defense does starts with its super talented front seven, led by Williams.  The sophomore is tied for the team lead in tackles with 36, and tackles for loss with 7.5, and also has 3.5 sacks.  Williams flies around the field making plays against the run and rushing the passer so Martin must slow him down as best he can.

KeiVarae Russell versus Marquise Lee:  Notre Dame corner KeiVarae Russell will be in tough for the second straight year trying to shut down the best receiver in college football Marquise Lee.  Russell has had an up and down season totalling 23 tackles and leading the team in breakups and pass defenses with four each.  Russell will be facing a banged up Lee as he is dealing with a knee injury.  Even after missing last week’s game versus Arizona Lee is still the Trojans leading receiver with 30 receptions for 385 yards and a touchdown.  Russell will look to do what he did to Lee last year and hold him in check while eliminating any back-breaking big plays.

The Notre Dame linebackers versus USC’s running backs:  With Jarrett Grace’s injury Notre Dame is going to be forced to continue to cycle linebackers to experience success.  Carlo Calabrese will lead the way against the stable of Trojan running back that will all carry the ball.  The Irish linebacking unit must slow down a group of five backs headlined by Silas Redd and Tre Madden that average just over 200 yards per game.  If the Irish linebackers as a whole can’t slow down the Trojans run game the Notre Dame offense will have limited opportunities to touch the ball and it could be a long night.