As if there were not enough subplots forming for this weekend’s contest with Florida State, Notre Dame decided to throw another one out of there on Thursday night with a tweet stating that the Irish will wear green jerseys for Senior Day.

Regardless of how you feel about the jerseys, the video is pretty cool.  Notre Dame pays homage to Rudy which is celebrating its 25th anniversary this year.  It just so happens to also be the 25th anniversary of the epic 1993 Notre Dame – Florida State classic in Notre Dame Stadium – the last “Game of the Century” that the Irish were involved in. 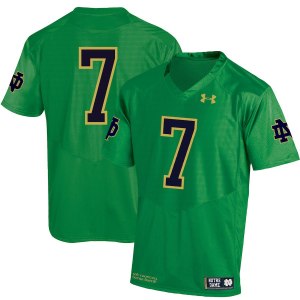 Our affiliate partners at Fanatics added some green Notre Dame jerseys to their inventory earlier this week, but at the time it wasn’t clear if the Irish would wear green or if they just decided to sell some green jerseys.  After Notre Dame’s tweet and video tonight, we can only assume that the jerseys getting sold at Fanatics are the jerseys Notre Dame is referencing in the video.

The last time Notre Dame won green jerseys at home was 2007 for USC’s visit to South Bend.  The jerseys that afternoon were the classic 1977 throwbacks though and not just a green variant of their normal jerseys.  Notre Dame got throttled 37-0 that afternoon.

The Irish did wear a green variant for Senior Day in 2006 for Army.  In Brady Quinn’s last game in Notre Dame Stadium against Army.  Notre Dame did the throttling that afternoon.

Prior to 2006 the Irish surprised everyone by warming up in blue jerseys for USC in 2005 and then coming out for the game in hunter green jerseys.  We all know how that heartbreaker ended.

(Note: technically the Irish wore green for a “home” game in 2015 when they wore green jerseys at Fenway Park for the Shamrock Series as well.)

Now that news broke of Ian Book being out this weekend – though Brian Kelly would not completely rule him out – the most obvious green jersey memory for most Notre Dame fans will be 2002.  Ty Willingham’s magical first season at Notre Dame suffered the first of many lumps when the Irish surprisingly wore green for a mediocre Boston College team.  Backup quarterback Pat Dillingham played most of that game after Carlyle Holiday got hurt and the Irish suffered a disappointing first loss of the season.

RELATED
Notre Dame Could End 2021 Recruiting Haul with a Bang

For many fans the unbeaten record, backup quarterback, and green jerseys will undoubtedly surface those bad memories and made for some anxiety producing days for the superstitious crowd.

I’m sure there will be plenty who scoff at this and complain about it being a marketing tactic – especially since the Irish won’t be wearing their traditional uniforms next week either – but if this is something the seniors did in fact ask for, they deserve to go out how they want after the way they helped turn this program around after ther 2016 disaster.

Reasons For Optimism For Brandon Wimbush And Notre Dame