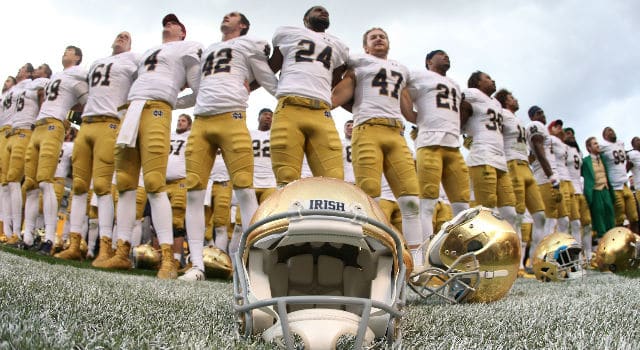 On Friday night Notre Dame celebrated Team 127 with the annual Echoes event – aka the old Notre Dame football banquet.  The yearly celebration is highlighted, of course, by handing out a myriad of awards.  Here’s a full recap of who took home what honors this evening.

This award is handed out for outstanding performance in the classroom & on the field.  Grace, a 5th year senior, battled back from a gruesome leg injury that cost him about a season and a half.  While he didn’t fit his way back into the starting lineup, the fact that he was able to make it back on the field at all after pretty much shattering his leg on the floor of Jerry World in Dallas is a major accomplishment.  Grace played great on special teams and came up huge against Navy when he saw his most extensive action of the season.

Tillery, or Terry Jillery as Sheldon Day nicknamed him, was pretty much a no-brainer here.  The true freshman early enrollee was recruited by pretty much everyone as an offensive tackle, but made the move to defense before ever arriving on campus.  Tillery ended up playing a major role for the 2015 Irish after Jarron Jones was lost for the year in camp.  Tillery hit the inevitable freshman wall at one point but still played in all 12 games and totaled 12 tackles, 2 TFL, and 1 sack while starting three games.  Tillery’s role will be expanding in 2015 with Day’s graduation.

Hoge, an early enrollee in January, earned the offensive scout team of the year award which could be considered a bit of an upset given the credit the SWAG team got for their help in preparing the Notre Dame defense for the option offenses of Georgia Tech and Navy.  Hoge is no slouch though.  In other years when Notre Dame didn’t have offensive line depth, Hoge might have been pressed into action, but luckily he was able to red-shirt this year.  Hoge will be a prime candidate for the starting center position in 2016 with Nick Martin’s departure.

Bilal, a true freshman linebacker, didn’t see action in 2015 but has a bright future with the Irish.  He came in a little under-sized last year but with a year in weight room, he will be ready for action in 2015.  He will be in the mix for playing time on defense, but also figures to be a potential special teams maven next season.

This one is a bit of a no-brainer here.  Kizer was thrust into action in week 2 when Malik Zaire’s broken ankle looked like it would derail the Irish season.  Kizer took over command of the Irish offense and had them in position to win every game.  He nearly willed the Irish to victory in the monsoon at Clemson but just ran out of time at the end.  In the season finale with a potential playoff spot on the line, Kizer marched the Irish down the field on what should have been a signature drive for him and Notre Dame, but it wasn’t enough after the defensive surrendered the lead.  Kizer will be in one heck of a battle with Zaire this spring, but still has one more game this season to stake his claim to the starting position beyond 2015.

This award is handed out for dedication in the weight room and it’s easy to see why it was even to Okwara.  As a senior, Okwara started to show the pass rush skills that we’ve all been waiting to see since he was thrust into playing time way too early as a 17 year old freshman.  Okwara is still scratching the surface of his potential but finished the season as Notre Dame’s team leader in sacks with 8.0.

Day was finally able to stay healthy all season long and the results speak for themselves.  He was a USA Today 1st Team All-American and lead the Irish with 14.5 tackles for loss and 13 quarterback hurries.  Day was an animal on the interior of the Irish defensive line and held the line together after Jones’ injury.  As a two year captain, Day leaves Notre Dame as one heck of an accomplished player and will leave some big shoes for his understudy Terry to fill next fall.

This award is given out for outstanding service to the community making it pretty easy to see why Schmidt, a 5th year captain and former walk-on was given the award.  Schmidt definitely had his ups and downs on the field in 2015, but his service off the field has never been in doubt – nor has his commitment and dedication to the Notre Dame program.

The award is given out for hard work, dedication & commitment to the program.  My feelings regarding Brown are well documented – he’s easily one of my favorites over the last few years.  Watch any of the Showtime episodes and you can see why Brown was a no-brainer for this award.  He’s a mentor to all of the wide receivers on the team and many others.  Brown’s presence will be sorely missed next year even though there are plenty of capable wide receivers on the roster who can replace his on-field production.  The question will be if any can replace the intangibles he brought to the team.

This one might have seemed like a bit of an upset with Ronnie Stanley manning the left side of the line, but Martin was truly the anchor in the middle of the line and a two time captain.  Like his brother before him, Martin leaves Notre Dame as one of the better linemen in recent memory and will leave a huge hole to fill in the center of the offensive line in 2016.

If there was a Mr. Notre Dame Football Award it might have went to Farley.  He was simply one of the least selfish, team first players to come through Notre Dame in a while.  How many players who spent their sophomore years starting all 13 games for a team that played for a national championship bouncing back and forth to other positions and playing a lot of special teams as a 5th year senior without complaining?  Farley took it a step further though, he embraced his role on the team and was one of the unquestioned leaders for this year’s squad.

Another no-brainer.  Smith is one of those once in a generation type players to come through Notre Dame.  Manti Te’o might have racked up more awards three years ago, but Smith is the most freakish linebacker Notre Dame has ever had.  He could play all three positions – and did at times in his career – and made ridiculous plays seem natural and easy.  Smith has a NFL decision to make after the bowl game, and while most feel it’s a forgone conclusion that he will forgo his final season and declare for the draft, it will be fun to at least imagine him potentially coming back in 2016 for a little while longer.

Martin winning offensive lineman of the year wasn’t nearly as surprising once this award was handed out.  Stanley came back for his senior season after widely being considered a 1st round pick a year ago to play for a national championship.  While that goal won’t be accomplished, Stanley’s senior season cemented him as a lock for a top 10 pick in May’s draft.  Technically Stanley has another year of eligibility, but it’s already been reported, unsurprisingly, that he will enter the draft.  Alex Bars who will be back from injury in 2016 will likely be his replacement unless the staff moves Mike McGlinchey over to left tackle.

Next Man In Award: CJ Prosise

Like Zaire’s injury against Virginia, Tarean Folston’s injury against Texas could have really derailed the Irish offense.  Instead, CJ Prosise stepped in week one and the only thing that slowed him down all season was a couple late season injuries.  He still managed to top 1,000 yards after playing running back for the first time in his career this year.   Prosise has a year of eligibility left but it is unclear right now if he will return for a 5th year or enter the NFL Draft.  Prosise could benefit from more experience at running back but will also face competition from a returning Folston and rising sophomore Josh Adams.

The last and final award went to the man who made big play after big play for Notre Dame in 2015 – Will Fuller.  The junior wide receiver scored game winning, and season saving, touchdowns against Virginia and Temple in the final minute of both road contests to keep Notre Dame’s playoff hopes alive at the time.  Fuller topped 1,000 yards again this season and added 13 touchdowns to the 15 he scored a year ago.  A few weeks back Fuller said he intends to return for his senior season but still submitted paperwork for a NFL evaluation leaving some doubt about his potential return in 2016.  Should he return as he has stated, he would be able to pretty much completely rewrite the Notre Dame receiving record books.