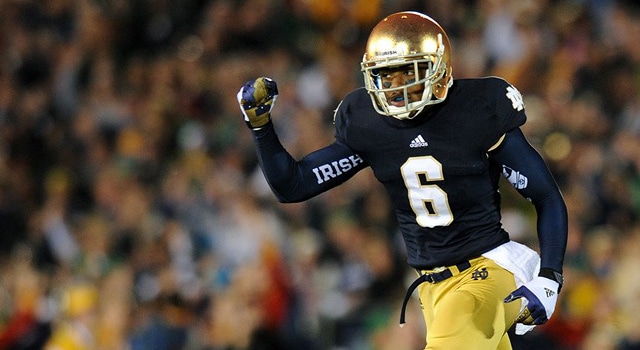 A college football recruiting class follows a fairly standard approach.  Approximately 15-25 high school seniors sign their letter of intent and arrive on campus in June – though a small contingent opt to forego their final semester of high school and enroll in college early – to begin their football careers.  While a select few may see the field as underclassmen due to team depth issues or superior talent, ideally the majority of a recruiting class won’t place a cleat on the gridiron until they become upperclassmen, allowing sufficient time to develop the requisite strength, speed and mental acumen necessary for playing college football.

But when has Notre Dame ever been orthodox?

Notre Dame’s class of 2012 began with the optimism one would expect from an influx of new personnel.  Eighteen high school seniors pledged their services to the University of Notre Dame and its head coach, Brian Kelly, giving the Fighting Irish the 20th ranked class in the nation and the 10th ranked class for average star power.  The excitement and innocence of the new Fighting Irish group received a dose of reality on national signing day, however, when Notre Dame’s class of 18 suddenly dropped by one.

Rivals 4-star wide receiver and media-anointed candidate to be Michael Floyd’s heir-apparent, Deontay Greenberry, stunned Notre Dame’s staff and the recruiting world when he made a signing day surprise by leaving Notre Dame in the lurch and signing with the Houston Cougars.  The turn of events was unexpected enough for Brian Kelly to take an uncharacteristic, subtle jab at Greenberry, telling the media, “I’m more excited about the guys who signed because they are the right kind of guys.”

The sparkle and shine of the 2012 class continued to have its luster diminished when Tee Shepard, an early enrollee and the #4 cornerback in America – as well as the cousin of Deontay Greenberry – announced his intention to leave the program.  The loss of Shepard was doubly felt after the #2 cornerback in the nation, Ronald Darby, decommitted from Notre Dame and ultimately signed with the Florida State Seminoles.  Shepard’s departure would be a precursor to a string of 2012 transfers that have plagued the Irish program as recently as this spring.

Five-star Gunner Kiel was the top-rated quarterback in the class of 2012 and blazed an unusual trail to Notre Dame’s campus.  Originally a verbal commitment to Indiana, Kiel backed out of his commitment to the Hoosiers and pledged his services to Les Miles’ LSU Tigers.  Shortly before signing day Kiel experienced a change of heart and enrolled at Notre Dame, angering Les Miles in the process.  Miles publicly questioned whether Kiel had the “chest” to lead a program, putting the bus in reverse several times over after having thrown Kiel under it.  The program switch would not be the young signal caller’s last, as Kiel transferred out of Notre Dame a mere month before Irish starting quarterback Everett Golson’s dismissal.

The 2012 defections kept on rolling.  Borderline 5-star receiver Davonte Neal, who was set to start at the slot position for Notre Dame in 2013, left the program and transferred to Arizona to be closer to his girlfriend and infant daughter.  Shortly thereafter wide receiver Justin Ferguson departed for Western Michigan University, citing “a level of comfort” as his reason for leaving South Bend.  The rash of roster losses due to transfer mixed with season-ending injuries to safety Nicky Baratti in 2013 and running back Amir Carlisle in 2012 – as well as the disappointingly slow progression of defensive lineman Jarron Jones – has signaled an extremely inauspicious beginning for the class of 2012.

But with adversity comes resilience, and the battle-tested sophomores at Notre Dame are taking full advantage of the cards they’ve been dealt.

KeiVarae Russell arrived in South Bend last June as a 4-star running back with an open mind and a fast-talking style of play.  As the injury bug infested the Irish secondary, Russell’s athleticism and selfless attitude landed him a starting cornerback position.  Fast-forward seven months and Russell was no longer the bright eyed, 4-star running back, but the Freshman All-American cornerback with 58 tackles and two interceptions.  An amazing feat for any true freshman, let alone an offensive player converted to defense.  And Russell has continued his rapid accession by recently being named the starting cornerback in 2013 over Lo Wood, the injured player he replaced in 2012.

While Jarron Jones has struggled, fellow 2012 defensive line classmate Sheldon Day has flourished.  In rare form, Day saw the field as a true freshman in 2012, chipping in critical sacks against Michigan State and Michigan.  Day has already been tabbed as defensive end Kapron Lewis Moore’s replacement, though his role will far surpass that of a plug-in.  Brian Kelly has gone out of his way to praise the future sophomore starter, essentially keying him as a star in the making.

“I wouldn’t trade [Day] for anybody on our football team,” Kelly boasted at a press conference.  “He is as impressive of a player as we have on defense.”

The line contributions from the class of 2012 can be seen on the offensive side of the ball as well.  Christian Lombard was a member of the offensive line unit that oversaw the resurgence of Notre Dame’s rushing production in 2012, making it all the more intriguing Lombard will likely move from right tackle to right guard this fall.  The transition is a wrinkle in Brian Kelly’s plan to place the best five offensive linemen on the field, and 2012 class member Ronnie Stanley has impressed enough at the right tackle position to allow Brian Kelly to get creative and move Lombard, a staple of the right side of the line, to the guard position.

While transfers have dogged the class of 2012, Notre Dame has also been on the receiving end of a college departure.   Amir Carlisle, a 4-star running back with blue chip speed and agility, transferred to Notre Dame from USC after a 118 yard campaign on the ground as a Trojan freshman.  Carlisle became a source of significant buzz out of Notre Dame’s camp in 2012 before succumbing to a season-ending injury and ultimately redshirting.  Now fully healed, Carlisle and his three years of eligibility are making waves yet again in Notre Dame’s camp, providing elusiveness and explosion at a slot position that has been mediocre at best since Brian Kelly’s arrival.

Decommittments, signing day jilts, transfers, injuries and slower-than-hoped-for development have all been marks of the class of 2012.  But for those still standing within 2012’s ranks, they’re hardened and experienced beyond their underclassmen years.