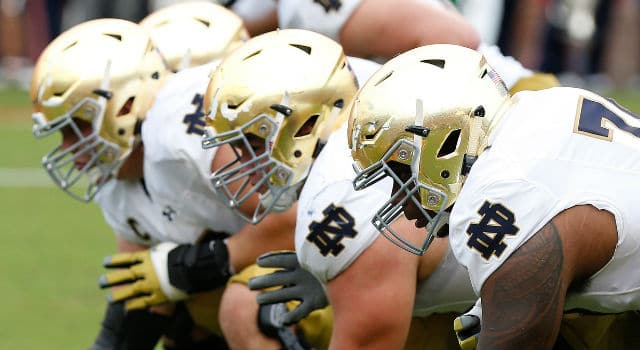 Aaron Taylor was one of the all time great offensive linemen for Notre Dame (Photo: Geoff Burke // USA TODAY Sports

Down 7-0 to rival USC after they drove the length of the field on their first series, the Notre Dame offense needed to answer. In prior years, you could expect a methodical drive, quick throws with a mix of running to settle the game down and keep USC’s offensive playmakers off the field. Ball control was the name of the game. Not this year.

We all know what happened, DeShone Kizer hit a streaking Will Fuller for a 75 yard touchdown, leaving USC All-American corner Adoree Jackson in his wake and adding him to his list of deep ball victims (a list that grows on a virtual weekly basis). But, this was more than just Notre Dame taking a shot deep with their best receiver to open a game. It was a play set-up by dominant line play that has turned the one-time big play challenged Notre Dame team into a barrage of offensive explosivity. Here are some numbers that highlight what the line has done for the 2015 Notre Dame offense:

Those are the yards per carry for main running backs C.J. Prosise and Josh Adams. Combined the two have run for 1,187 yards on their 163 totes to go along with 14 rushing touchdowns. It should be noted that since Notre Dame has gone to flipping the ball to the running backs on jet sweeps instead of handing it to them, they’ve lost about 80 yards in rushing yardage that is now given to receiving stats. As a pair they’ve rushed for touchdowns of 91, 70 and 56, which one could attribute to their breakaway speed as much as solid offensive line blocking, but when you consider that the two runs by Prosise both came inside the tackles and both involved him being untouched, you get the sense of how the line has allowed Prosise to showcase his ability as a runner.

The number of rushing touchdowns by all players over 15 yards. The red zone issues that Notre Dame has had under Brian Kelly has been well documented over the years, and this season has been much of the same. Notre Dame stands 83rd in red zone scoring percentage and 69th in red zone touchdown percentage. Those numbers are somewhat minimized by the fact that Notre Dame has been scoring so often outside of the red zone that it hasn’t been a huge issue so far for the Irish. No points are better than easy points, which is something that hasn’t been as plentiful for Brian Kelly teams as we’ve seen this season.

The number of rushing plays of 20 yards or more in all of 2014, which also happens to be the number of running plays over 20 yards so far in 2015. They are going to destroy all of Brian Kelly’s previous Notre Dame standards for chunk plays on the ground. 2014’s 18 was his previous high, the next closest coming in 2011 with Jonas Gray and Cierre Wood with 14 in their 13 games.

Currently, Notre Dame is averaging around three 20+ yard runs per contest, and the 18 total is good for 11th in the country, tied with Oregon. Obviously, it’s good to have chunk plays in the running game; it’s always easier to simply hand the ball to someone and let them run rather than have to throw it. There are far less variables. But, big plays in the running game lead to big plays in the passing game, something we didn’t see after the first four games last season and what, in my opinion, led to the high rate of turnovers to end the 2014 season.

The number of yards Will Fuller covered on the opening play against USC. You might be asking how this is related to the running game. Or maybe you are a football savant and have already thought of it. If that’s the case, good on you. If it isn’t, let me drop some knowledge. Will Fuller has always been fast and he’s always been able to run by people. But, after the Syracuse game in 2014, he was unable to do so for the Notre Dame offense. After his twin 70+ yard TD’s against Rice and the Orangemen, defenses started to figure out they needed to cover him with a corner and a safety over the top. Because Notre Dame was not the running team in 2014 that they are this season, they were able to do that. They were determined to make Notre Dame work for their points, which they were capable of at times, but when you are forced to run more plays, that can often lead to mistakes, which came in droves for Notre Dame at the end of last season.

When Notre Dame entered the contest against the Trojans, they were determined not to allow Prosise and Notre Dame to run on them, just as the Clemson Tigers were. The problem for USC of course was that their game was not played in hurricane like conditions, which rendered their game plan fatally flawed. You’ll see that on the play action, the back-side safety thunders the run, meaning eight are committed inside, meaning Fuller is all by himself on the outside with Jackson. It went how it went.

As the running game got rolling again late in the game, Fuller got behind defenders twice for 15 yard pass interference penalties that also came in single coverage. This is the dilemma that the offensive line and running attack have put teams in. Notre Dame can thrash you for big plays on the ground, and in the air. And those running plays can hit you just as quickly as a Will Fuller bomb.

The number of sacks attributed to the offensive line by College Football Film Room. As it currently stands, starting tackles Ronnie Stanley and Mike McGlinchey are operating at a 98.6% and 99.1% pass blocking clip with the low man Quenton Nelson coming in at an embarrassing, relatively of course, 97.1% pass blocking number. I suppose when you do things like this, that kind of mediocre pass protection can be overlooked. DeShone Kizer will enter the game Saturday ranked 14th nationally in passing efficiency, which is pretty good for a guy who in the spring looked like the 14th rated passer on the Notre Dame team. While he has been deservedly lauded for his maturity and poise, there is no question that his meteoric rise onto the college football scene has been aided by the steadiness of a line that continually gives him time to set his feet and throw.

The average yards/play for the 2015 Notre Dame team, which is good for 4th in the nation. This is a pretty incredible stat given the Irish are down their starting quarterback, running back and tight end. It also underscores how important the offensive line has been for the offense. While the skill groups have lost out on weapons, the line has remained intact with the exception of Quenton Nelson and Alex Bars interchanging for the USC game. Often, when we think of a strong offensive line, we think of four yards and a cloud of dust, 16 play drives that take the fight right out of the opponent. Who knows, maybe that is the intention, and the line has just been too good for these running backs, who are all capable of turning a simple read option into a 70 yard gallop to the end zone, where they are untouched for the first 15 yards.

In the second half of this season, Notre Dame will be facing a relative gauntlet of strong defenses, starting with Temple on Saturday that has given up a paltry 92 yards a game on the ground. If Notre Dame is to be the playoff team that they aspire to be, they need to be, for the most part, match-up proof. Which means they will perform against any team, any time. They fell short of that standard at Clemson, but have looked like the dominant unit they can be in the games since then. They have a chance to continue that dominance on Saturday against one of the best in college football this season. As we saw against USC, Notre Dame has the athletes to compete with anyone in the nation. They now have the offensive line to give those athletes the space and time to show their quality.