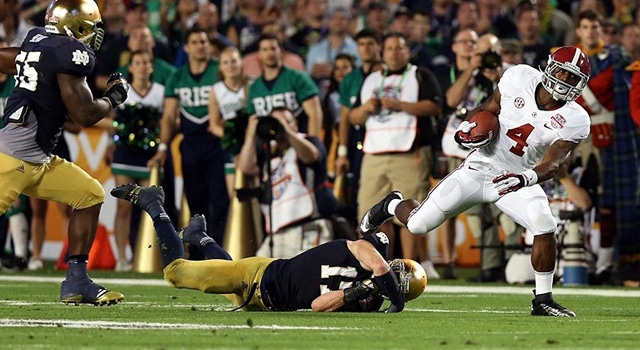 The 2012 season was a magical ride for Notre Dame fans featuring a trip to the BCS Championship game that no one saw coming four months ago.  Last night that ride came to a crashing halt in Miami with a resounding 42-14 beating at the hands of Alabama – a nightmare result no one saw coming either.

From start to finish last night, Alabama controlled the game and inserted their will on Notre Dame.  While Alabama scored touchdowns on their first three drives, Notre Dame struggled to simply move the ball.

The Irish defense that was so strong all season was pushed around by an Alabama offense that was methodical in their production.  Notre Dame had given up two rushing touchdowns over the course of the first 12 games of the season.  Alabama ran for two in the first 16 minutes last while while racking up 529 yards of offense.

By the time the Irish defense adjusted and got used to Alabama’s size and speed, the score was 28-0 heading into half-time with Brian Kelly saying that the Irish could maybe get back into the game if Alabama didn’t show up for the second half.

A lot can be said about the game itself – what went wrong, what could Kelly and Notre Dame have done better to prepare, etc; but despite the truly disappointing finish to the season, Notre Dame fans should not forget just how special this year was.

In the pre-season this team was predicted to finish 8-4 or worse by most experts.  The fact that the Irish were even in the position they were in last night defied odds and rejuvenated an entire fan base that was in desperate need of a run like the one the 2012 Fighting Irish gave us.

I’m sure many fans are depressed today.  Hell, I know I am after sitting in the Alabama section last night and hearing Roll Tide, Roll after every damn first down even after they built a huge lead, but at the same time, I think back to where we were a year ago and can’t help but feel better about where this team is and where it’s headed.

A year ago we were discussing a bowl meltdown against a weak Florida State team in the Champs Sports Bowl.  Today we are discussing the fall out from losing to a team that has now won three of the last four national championships in the BCS Championship Bowl.

This team gave us so many amazing memories over the last four months.  The trip to Dublin to start the season, Tommy Rees coming off the bench against Purdue, intercepting Denard Robinson four times against Michigan, the epic goal line stand against Stanford, the beatdown of the Sooners in Norman, the triple over time thriller against Pitt, Manti Te’o’s improbable run for the Heisman, and the list goes on.

It sucks that we lost last night.  It sucks that this team did not play to the level it’s capable of.  And it sucks that Notre Dame missed out on an amazing opportunity to add to the trophy case at the Gug.  You know what sucks more though?  Losing the Champs Bowl and playing in bowl games days before New Year’s Eve sucks more. Playing in the Hawaii Bowl in a glorified exhibition sucks more.  Not even going to a bowl game and losing to teams like Navy, Syracuse, and Tulsa sucks more.

Losing in the fashion in which we lost last night should never be acceptable, but things can be – and recently were – much worse.

It’s unfortunate that the clock struck midnight on this team’s dream season last night – especially for the seniors like Manti Te’o, Kapron Lewis-Moore (whose injury was heart breaking), and Braxston Cave.  Guys who have given so much to this program through tough times and came up just short of their ultimate goal, but this team will regrroup and will get back to work at making another march towards a title next fall.

The dream that was the 2012 season may have ended with a nightmare in Miami last night, but nothing we’ve seen from Brian Kelly, his coaching staff, and this team leads me to believe that another dream season isn’t possible in 2013.

Here’s hoping that we’re still dreaming on the morning of January 7th next year in sunny California.