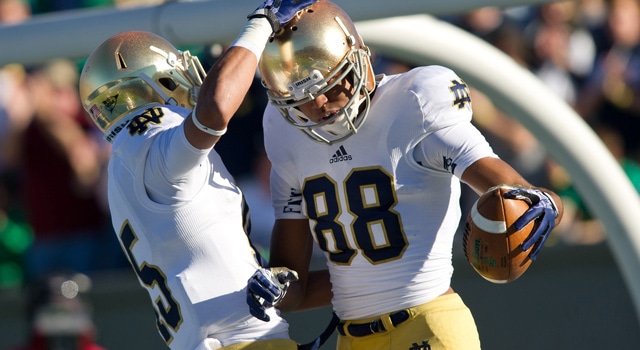 Notre Dame has recruited well at the wide receiver position over the last couple of years and that recruiting is already paying dividends for the Irish on the playing field.  This past weekend against Air Force the first two touchdowns of the game for the Irish were scored on pass plays of 35 yards or more by true freshmen wide receivers Corey Robinson and Will Fuller.  All signs point to more of the same from the freshmen duo and there are plenty of more playmakers in the pipeline on campus and in the Golden Army 14 ready to add to what should be an elite gorup.

After a slow start to recruiting the receiver position early in his tenure, Brian Kelly has built a young corps of wide receivers poised to pace the Notre Dame passing games for years to come.  Notre Dame already has four talented wide receivers in this year’s freshmen class with all but one making an impact already and the only reason it’s three of four is because the fourth is coming off a major injury.

In addition to the quartet of current freshmen, Kelly and staff have a trio of recruits in the incoming #GoldenArmy14 capable of making early impacts on the field for Notre Dame as well given the chance.

Notre Dame has lost a lot of talent at the wide receiver position over the last few seasons to decommitments and transfers.  Deontay Greenberry decommitted from Notre Dame on Signing Day 2012 and then Davonte Neal and Justin Ferguson transferred this past off-season.

Add DaVaris Daniels who has two years of eligibility remaining in the wide receiver mix though and even with all of those losses, Notre Dame is set to have one the deepest and most talent receiving corps in the country for the next few years.

For Robinson and Fuller though, the future is now.  With a couple of lighter games on the schedule before the Irish end the year against BYU and Stanford, look for Robinson and Fuller to get worked into the game-plan more and more as Kelly and Notre Dame prepare to replace #1 wide receiver TJ Jones this off-season.

What makes the construction of Notre Dame’s current crop of rising star wide receivers even more impressive for the Irish is that while several were rated as 4-star recruits, none of them were labeled can’t miss, play from day one type recruits.  Fuller and Robinson were 4-star receivers from Rivals but were ranked just 19th and 44th respectively.  Onwualu, meanwhile, was rated as an athlete.  Robinson was actually a 3-star recruit prior to his commitment to Notre Dame as well.

Regardless of how they were ranked in high school, both Fuller and Robinson are already making their presence felt and should only continue to see their roles increase in the Irish offense.  Once Hunter recovers and the current trio arrives on campus to add their skills to the mix, the end result could be the prolific passing attack we’ve been waiting to arrive since watching Brian Kelly’s high flying Cincinnati offenses.