Notre Dame’s Linebacker Unit on the Brink of Elite Status 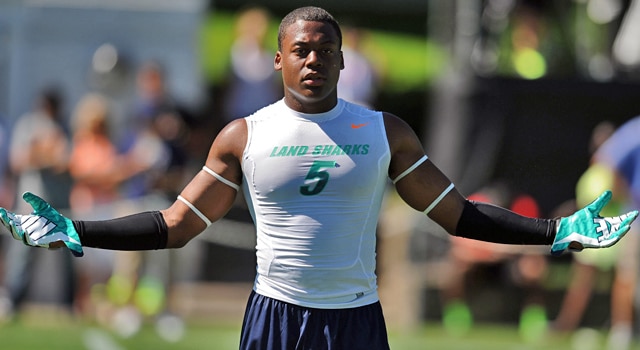 The notion may seem laughable when examining last year’s depth chart and the lack of carryover into 2014. Notre Dame struggled in 2013 with the loss of its defensive heart and soul in linebacker Manti Te’o, and will lose mainstays Carlo Calabrese and Dan Fox to graduation this spring. The depth chart hits mentioned don’t even take into consideration the retirement of linebacker Danny Spond due to health concerns, the devastating injury suffered to last season’s starter at the Mike position, Jarrett Grace, or the recruiting defections of elite one-time commitments Alex Anzalone or, most recently, Richard Yeargin III.

The truth is head coach Brian Kelly has been quietly building star power and depth at the position, and strengthening its foundation with each incoming recruiting class.

The star power began with the recruiting Class of 2013 when Notre Dame landed its most heralded defensive commitment of the Internet recruiting era in 5-star linebacker Jaylon Smith. Smith was listed by Rivals.com as the #1 outside linebacker in the nation and the 3rd highest player regardless of position. Smith was so highly regarded that he ranked nine spots ahead of where Manti Te’o was listed nationally coming out of high school, an impressive feat considering Te’o would eventually become the most decorated college football player in history.

The pattern was repeated in the Recruiting Class of 2014 when Notre Dame managed to sign Rivals 4-star Nyles Morgan. Morgan was rated by Rivals as the 5th best inside linebacker nationally and held offers from nearly every major program in America, from Alabama to USC and every letter in-between. Even more importantly, Smith and Morgan’s signings represented a major coup for Notre Dame.

In addition to battling all of the college powers for their signatures, Brian Kelly and staff had to overcome built-in advantages other programs enjoyed. Jaylon Smith, though an Indiana native, was familiar with the recruiting process having witnessed his older brother ultimately sign with Ohio State. Notre Dame’s ability to pluck away an elite recruit whose family was comfortable with another major program represented a major upset.

The “upset” label also accurately described Notre Dame’s underdog status throughout Nyles Morgan’s recruitment. A standout at Crete-Monee High School in Illinois, Morgan’s proximity to South Bend wasn’t as strong a positive as one would expect. The Ole Miss Rebels had developed a recruiting pipeline to Crete-Monee after signing Morgan’s high school teammates and friends, Laquon Treadwell and Anthony Standifer, both of whom were recruited by Notre Dame before signing with Ole Miss. Kelly never let up in his pursuit and managed to gain the upper hand after several campus visits with Morgan and his family.

The Fighting Irish are well on their way again for the Class of 2015 with linebacker recruit Justin Hilliard. Hilliard is currently listed as a Rivals 4-star, though his status as the #1 inside linebacker in his class, along with his 47th overall ranking, has him knocking on the door of achieving 5-star status. Kelly cemented Notre Dame’s position as a legitimate threat to land Hilliard’s signature after Hilliard cancelled his unofficial visit to Alabama last weekend in order to attend Notre Dame’s junior day, an event that allows up-and-coming high school football talent to showcase their skills to Notre Dame’s coaching staff.

Hilliard’s relationship with Notre Dame grew even stronger when the blue chip athlete from Ohio decided to spend an extra day on campus to get to know Notre Dame’s coaches and players, with Kelly having Hilliard spend his free time with emerging star, Jaylon Smith. The time spent will do nothing but reinforce an already strong connection, with Hilliard not only attending a high school in Cincinnati, a city where Brian Kelly made a name for himself as head coach of the Bearcats, but at St. Xavier, a high school that produced Notre Dame signees Matt James and Luke Massa.

Should Notre Dame manage to ward off other major college powers and eventually sign Justin Hilliard, Notre Dame would have the potential in 2015 to trot out three elite linebackers – should the Fighting Irish switch to a 4-3 defensive front, which is the current speculation – in Jaylon Smith, Nyles Morgan and Justin Hilliard, an array of linebacker talent the Fighting Irish have not possessed since the Lou Holtz era. Better yet, the depth at the position would rival that of any college power in the country.

In addition to the three elite linebackers mentioned, a bevy of extraordinary talent and potential would fill the two-deep roster. Jarrett Grace, Notre Dame’s starting Mike linebacker in 2013, would be entering his final year of eligibility, and heavily recruited high school talent such as Doug Randolph and Kolin Hill would be entering their prime and ready to contribute at a high level. The end result would be one of the most talented and deep linebacker units in the country.

While Notre Dame has endured losses at the linebacker spot due to graduation, injury and recruiting defection in recent years, Brian Kelly has quietly been assembling an arsenal of weaponry for new Irish defensive coordinator, Brian VanGorder, to execute his aggressive schemes.

Scott Janssen is a blogger for the Huffington Post and has authored several nationally-featured articles, including an appearance on MSNBC as a sports contributor. He talks football 24 hours a day, much to the chagrin of his fiancée. Scott can be reached at scottjanssenhp@gmail.com.