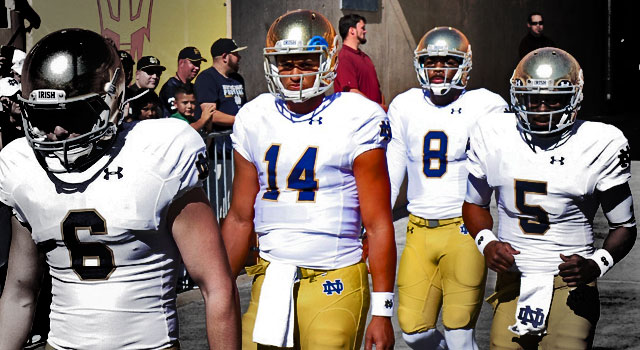 Worried about Notre Dame’s depth at quarterback following the departure of incumbent starter Everett Golson?  Don’t be.  Even with Golson deciding to transfer and in essence conceding the starting quarterback derby to Malik Zaire, Notre Dame still remains deep and talented at the most crucial position on any football team thanks to the recruiting of the Irish staff the last few years.

When news broke of Golson transferring one of the immediate concerns that popped up among Notre Dame fans was all of the snaps that Golson took away from Deshone Kizer this spring before ultimately transferring.  While those concerns are certainly valid considering Kizer has no collegiate experience, Notre Dame entered the 2014 season with a backup quarterback who had never taken a collegiate snap and in 2012, they started the season with a starter who had never taken a snap before.

So, going into a season with a backup and/or starter with limited experience isn’t new for Notre Dame and hasn’t prevented the Irish from having success in the past.

From top to bottom though, the depth chart at quarterback is still very strong for Notre Dame.  With Zaire as the starter, Kizer the backup, and incoming freshman Brandon Wimbush third – at least to start fall camp – Notre Dame’s depth chart is full of similar style quarterbacks all of whom were rated as 4-star quarterbacks out of high school.

No one can argue that Notre Dame is not in worse shape at quarterback without Golson since at worst the Irish would have entered 2015 with one of the most experienced and talented backups in all of college football.  At the same time, Notre Dame is still in good shape at the position in 2015 and beyond.

Golson’s departure will certainly impact the Irish offense in 2015, but it won’t derail it either by any means.  With Zaire, Kizer, and Wimbush Notre Dame will be short on experience this season, but not short on talent.

Notre Dame will likely run the ball more with an inexperienced quarterback much like they did in 2012, but that isn’t necessarily a bad thing.  Some would argue that the Irish relied too heavily on the pass with an experienced Golson in 2014 and an experienced Tommy Rees in 2013 and while those offenses put up points, they also turned the ball over far too often.

The lack of experience at quarterback will make the job of offensive coordinator Mike Sanford much more difficult this summer since he’s going to need to prepare a backup whose never taken a snap on the collegiate level and a starter who has attempted just 35 career passes.  Fundamentals – something Sanford focused on with Zaire and Golson in the Spring – will again need to be the focus of most of his coaching in fall camp.

With the starting quarterback derby decided, the backup quarterback race will be interesting to watch.  Deshone Kizer has a head start on Brandon Wimbush, but the competition between Golson and Zaire this spring limited his reps to the point that his lead isn’t insurmountable.  Wimbush comes to Notre Dame a more polisher passer than either Zaire or Kizer when they reported to Notre Dame and could very well challenge for the backup position.

Prior to Golson’s decision to transfer, Wimbush was a prime candidate for a redshirt season in 2015.  Even he felt that would was in the cards according to the South Bend Tribune.

“I wanted to redshirt,” Wimbush said. “I had the mindset of coming in and redshirting and being able to learn and get acclimated for a year. With this, my mind changed immediately. My mindset really did change quickly as soon as I heard it.”

A redshirt season might not be possible for Wimbush now depending on how things shake out.  That is one component of the Golson transfer that does hurt Notre Dame’s depth moving forward.  In an ideal world, Notre Dame would have entered the 2016 season with four years of eligibility for Wimbush and three for Kizer to stagger their quarterbacks eligibility.

Because of the likelihood of Wimbush being forced into action, Golson’s departure could alter Notre Dame’s recruiting plans this year at the quarterback position.  Had Golson stayed, Wimbush would have almost certainly redshirted which could have allowed Notre Dame to pass on a quarterback if they are unable to land an elite signal caller in this recruiting cycle.  Now the Irish staff is almost forced to add one given Kizer and Wimbush could both enter 2016 with only three years a piece left.  Such situations can lead to the need to transfers down the line.

Aside from the potential recruiting implications – which could be minor as it appeared Notre Dame was set on adding a quarterback in the class of 2016 regardless – Golson’s departure, while without question disappointing, shouldn’t greatly impact Notre Dame’s chances of a playoff run in 2015 and beyond.  It’s very likely that Notre Dame’s best chance at a playoff run in 2015 was if the Everett Golson from the first seven games of 2014 won the starting quarterback position, but without him on the Irish roster this fall, Notre Dame can still make a playoff run and still features an enviable depth chart at quarterback.