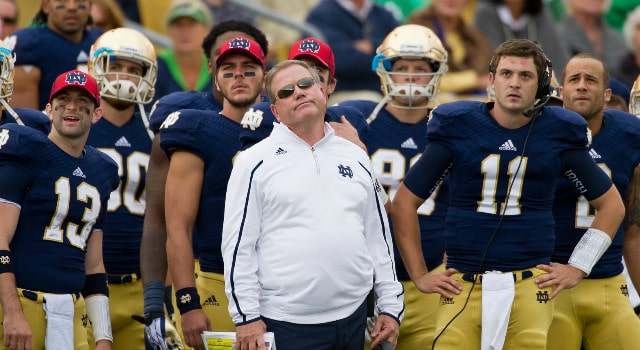 Notre Dame’s match against Michigan State was to be the litmus test to a 2013 season that has produced nothing but questions.  Could Tommy Rees win in suspended quarterback Everett Golson’s stead?  Who would be the go-to running back after the departure of last year’s stars, Theo Riddick and Cierre Wood?  How would Notre Dame’s defense perform in a post-Manti Te’o era?

After yet another grind-it-out victory against the Spartans, the results to the questions that have been plaguing Irish fans since the start of the season are finally in.

How can information be gleaned from a performance where Notre Dame gained more yards from Michigan State penalties (115) than from yards rushing (78)?  How can a starting running back emerge when the highest yards per carry mark for an Irish running back against MSU was 3.8 and the overall team average was 2.4?  And how can these situations be rectified when Notre Dame’s coaching staff and senior captains are making the mistakes while true freshmen, such as wide receivers Corey Robinson and Will Fuller, make repeated clutch performances?

It was Notre Dame offensive coordinator Chuck Martin that was baited into throwing a wide receiver bubble screen on the second play of the game, with Michigan State’s secondary anticipating the play call and immediately crashing the line of scrimmage, tackling wide receiver C.J. Prosise for a 3-yard loss that ultimately led to a three-and-out on the first offensive drive.  And it was Chuck Martin who lined up in the pistol formation with 33 seconds to go in the first half when every player, coach and fan in Notre Dame Stadium knew a fade route to Irish wide receiver DaVaris Daniels was on the way, before it ever fell lifelessly incomplete along the sidelines.  Predictable play calling, however, was not the only problem for the Fighting Irish on Saturday.

It was senior captain T.J. Jones, placed on special teams to bring stability to an underwhelming phase of Notre Dame’s game, who nearly caused catastrophe on two separate punt returns, failing to stay clear of one punt that took a nasty bounce – something which NBC analyst Mike Mayock chided him for – and rushing another with a poor angle that just as easily could have caused a fumble.  And it was senior captain Tommy Rees who intentionally threw a pass out of bounds on 3rd and 14 in the 4th quarter with less than three minutes to go, killing the clock and sparing Michigan State from having to burn its final time out of the game.  Luckily, MSU quarterback Andrew Maxwell made a similar mental error that would seal Michigan State’s fate, scrambling out of bounds on a do-or-die 4th and 20 without even attempting to make a conversion in MSU’s last drive of the game.

Keeping with the theme of mixed results, despite the mental errors and stretches of monotonous play calling, Notre Dame also showed growth.  Nearing the end of the first half and in need of a momentum changer, Notre Dame scored a touchdown on a broken play rather than settling for a field goal, taking the lead into halftime.  Fresh off throwing an incomplete fade route to DaVaris Daniels at the goal line, Chuck Martin called for another fade route on the next play.  Rees, seeing it was not open, improvised and found T.J. Jones in the back of the end zone, firing a perfect throw into tight coverage and providing Jones with an opportunity to make an acrobatic touchdown reception.

The Notre Dame defense showed progress as well, allowing only 254 total yards against Michigan State, the lowest number of the season.  Defensive coordinator Bob Diaco showcased flashes of last year’s defensive dominance, holding the Spartans to 13 points, a 3.4 yards per carry rushing average and less than 4-yards per pass attempt.

While Saturday was a needed litmus test that provided mixed results, it’s important to keep the season’s progress in perspective.  Notre Dame has faced a serious identity crisis in 2013 but has still managed to find ways to win, an important trait head coach Brian Kelly has hammered home time and again.  Tied 10-10 against MSU, Notre Dame punched in the game winning score on an untouched 7-yard Cam McDaniel scamper within the first 60 seconds of the 4th quarter, illustrating the finishing ability Kelly has spent four years building still exists even if the names of the finishers remain unsettled.  Finding ways to win even when critical questions are left unanswered is what a good coaching staff does, and why Notre Dame has won 19 out of its last 21 regular season games.

Will Notre Dame’s inconclusive performance against Michigan State be enough to overcome an Oklahoma Sooners team that appears in every way to be an inevitable Big 12 champion?  That’s the problem with inconclusive results – all you can do is wait for the next test.