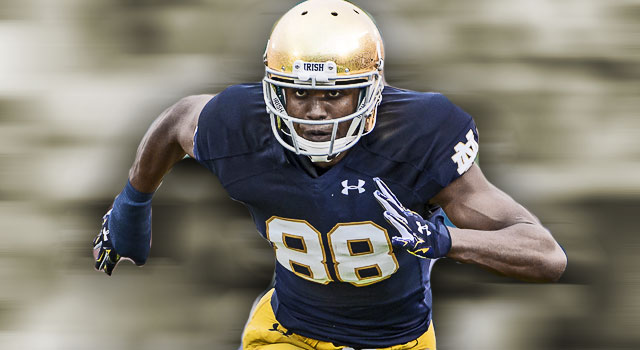 Notre Dame’s undefeated September campaign has created a throng of storylines.  Everett Golson – the Fighting Irish’s modern version of the Prodigal Son – has returned from academic exile to lead the program to a thus-far unblemished record, all while accumulating statistics that have seen his name at least mentioned as a potential Heisman candidate down the road.

On the other side of the ball, it’s impossible to ignore the impressive feats of new defensive coordinator Brian VanGorder, who has taken over a unit that saw its defensive line depleted due to NFL Draft selections but has somehow managed to take youthful replacements and turn them into the 3rd best scoring defense in the nation.  But there’s a segment of head coach Brian Kelly’s squad that has been central to the 2014’s season success, though rarely discussed: Notre Dame’s wide receiver corps.

One of the most impressive aspects of the success the Notre Dame wide receiver corps has experienced involves the obstacles that had to be overcome.  The 2014 season was already scheduled for an identity makeover at the position with the losses of former captain T.J. Jones and star tight end Troy Niklas to the NFL.  The makeover morphed into a full-blown crisis with the announcement DaVaris Daniels, Notre Dame’s most experienced wide receiver and one widely anticipated to have a breakout season, would be held out while the university undergoes an academic investigation.

Suddenly, outside of tight end Ben Koyack and wide receiver Chris Brown – both of whom were still in the process of acclimating to increased playing time – none of the wide receivers on Notre Dame’s depth chart had ever caught a pass from Everett Golson, either due to still being in high school during the 2012 season or missing the year with injury (Amir Carlisle).  The situation left Golson with targets such as Will Fuller, who had 6 career receptions heading into this fall, or Corey Robinson, who boasted only 9 career catches.

Despite the challenges, the group has persevered, and it has done so as a collective whole.  In every game thus far Golson has managed to complete passes to at least seven different receivers, and upped the ante to eight against Purdue.  Will Fuller has tripled his career touchdown and receiving totals in just one month, and C.J. Prosise, a safety converted to wide receiver, is averaging 20 yards per reception.  Amir Carlisle, who struggled with drops last season, has emerged as the most sure-handed pass catcher on the team, with highlight-making grabs against rival Michigan.

The level of production put forth by Notre Dame’s wide receivers was necessary for the Fighting Irish to push through the month of September unscathed.  The Michigan defense placed an emphasis on stopping the run, putting the pressure on Notre Dame’s green wide receiver to exploit the one-on-one matchups in the passing game, a battle the Wolverines gambled the Fighting Irish could not win.  Not only did the wide receivers win those battles but they fought through nerves and adversity to get there.

On the opening drive against Michigan Golson threw a bubble screen to true-sophomore Will Fuller.  With Michigan’s secondary fully blocked, a clean catch would have netted a long gain, if not an outright touchdown.  Fuller, perhaps making such a calculation, momentarily bobbled the catch, ultimately causing a negative play that would lead to a punt.  Such a missed opportunity on a big stage could be enough to overwhelm a young group, but Notre Dame’s wide receivers responded on the next offensive drive after the VanGorder defense held Michigan.

Amir Carlisle made two key receptions for 18-yards while C.J. Prosise burned Michigan for an 18-yard gain.  Having driven to Michigan’s 12-yard line, Everett Golson tossed a perfect fade to Corey Robinson, whose well-positioned lanky frame forced Michigan cornerback Jourdan Lewis to draw a defensive pass interference call.  The penalty moved the ball to the goal line, which set up a 1-yard Cam McDaniel touchdown run and the start of Notre Dame’s historic rout of the Michigan Wolverines.

The fact Notre Dame’s wide receiver corps is experiencing success is not a surprise given the immense talent at the position.  What makes that success impressive, however, is how quickly the young wide receivers were forced to grow up, and how well they responded to a hastened maturation process.  And what should make every Irish fan smile is the knowledge this group is only beginning to tap into its vast potential.

Scott Janssen is a blogger for the Huffington Post and has authored several nationally-featured articles, including an appearance on MSNBC as a sports contributor.  He talks football 24 hours a day, much to the chagrin of his wife and those around him.  Scott can be reached at scottjanssenhp@gmail.com.