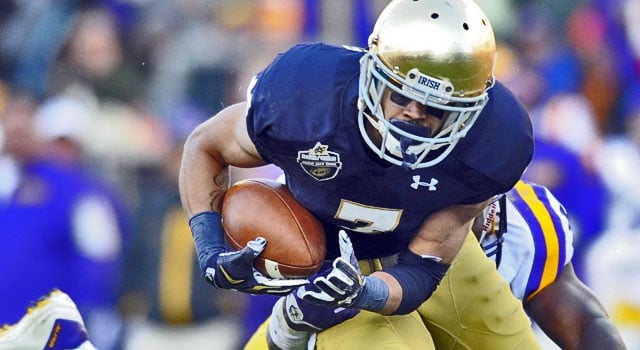 Will Fuller (7) runs for a gain after a reception during the first half against the LSU Tigers in the Music City Bowl at LP Field. Mandatory Credit: Christopher Hanewinckel-USA TODAY Sports

There are a lot of reasons for optimism involving Notre Dame’s offensive future: an elite offensive line, talented running backs and a rushing attack that gashed LSU’s – an SEC power – defense in the Music City Bowl last season. That optimism has transformed into outright excitement with the hiring of Mike Sanford as the offensive coordinator and quarterbacks coach, and for good reason.

Sanford, the offensive coordinator for last season’s Fiesta Bowl-winning Boise State Broncos, led the Broncos to a 29th national ranking in rushing yards as running back Jay Ajayi piled up over 1,800 yards and 28 touchdowns on the ground. Given Notre Dame is returning one of the best offensive lines in the country, and with the emergence of junior running back Tarean Folston, the possibilities for Notre Dame’s rushing attack seem endless. Such sentiments grew exponentially during Sanford’s introductory press conference when he connected championship football to which team runs the ball most effectively. Irish fans clamoring for Notre Dame to commit to the rushing game may have been too busy jumping for joy at Sanford’s comment to hear the full quote where the new offensive coordinator may have tipped his hand regarding the future of Notre Dame’s offense.

“The biggest thing that I’ve found is that championship football a lot of the time comes down to who runs the football the best and then who makes the explosive plays down the field in the throwing game,” Sanford told the media.

Most of the dialogue involving Sanford’s offensive history has focused on Boise State’s success rushing the ball, which is only half the story. Ranked 14th nationally in total yards after averaging roughly 500 yards per game, Sanford oversaw a balanced attack, finished 23rd nationally in passing to complement the Broncos’ 29th ranking in rushing offense.

Sanford punishes opposing defenses with the run and then finishes them off with play-action passes. And if the 32-year old offensive coordinator is looking for explosive plays in the passing game, Notre Dame’s wide receivers are more than ready to provide the spark.

Notre Dame’s wide receiver corps returns a stable of talent led by junior Will Fuller. The six-foot-one-inch Philadelphia native emerged as a star in 2014 and was quarterback Everett Golson’s go-to player in the passing game. Fuller hauled in 76 catches for over 1,000 yards and a nearly unprecedented 15 touchdowns, tying Golden Tate’s 2009 school record of 15 in one season. The explosive wide out will be regarded as one of the nation’s best heading into 2015, as College Football Talk stated Fuller was “snubbed” as a Biletnikoff Award – an annual award given to the nation’s best wide receiver – semifinalist in 2014.

Fuller is joined by a cadre of experienced wide receivers with different skill sets. Six-foot-five inch junior Corey Robinson took a step forward during his sophomore season, utilizing his big frame to haul in 40 passes and 5 touchdowns. Seniors Amir Carlisle and Chris Brown, though they have yet to tap into their vast potential, offer big play ability with their speed and agility.

Just as exciting as the experience returning at wide receiver is the depth of young, unproven talent. Notre Dame fans are still waiting for Torii Hunter Jr. – a recruiting gem who won Nike’s The Opening MVP as a senior in high school – to showcase his ability. The son of MLB star Torii Hunter, the youngest Hunter’s playing time has been limited due to a lengthy rehabilitation while recovering from a broken femur suffered in high school.

The same can be said of young wide receivers Justin Brent and Corey Holmes, both highly sought after recruits who have yet to see the field. Serving as icing on the cake, Notre Dame signed yet another great wide receiver class, reeling in big-time prospects such as Miles Boykin, Equanimeous St. Brown and tight end Alize Jones, rated by several outlets as the No. 1 tight end in the nation.

The layers of talent at wide receiver will provide Mike Sanford plenty of options in his quest for an explosive passing game and will allow him to attack in multiple formations. Notre Dame could take advantage of its speed in a spread formation with wide receivers Will Fuller, Chris Brown and Amir Carlisle or Torii Hunter Jr. Additionally, Notre Dame could use a two tight end set as its base red zone formation with tight ends Durham Smythe and Alize Jones and wide receivers Corey Robinson and Equanimeous St. Brown. Such an alignment would be excellent in the running game but also lethal in the passing game, with every wide receiver and tight end option being at least six-feet-five-inches tall. There are simply too many variations to name, and it will be interesting to see how Sanford decides to utilize Notre Dame’s talent.

Newly appointed Notre Dame offensive coordinator Mike Sanford will have lots of different ways to create explosions with the personnel he has inherited. For Notre Dame fans, the 2015 season will be a great time to sit back and enjoy the fireworks.