Pitt’s JP Holtz Doesn’t Like Notre Dame At All 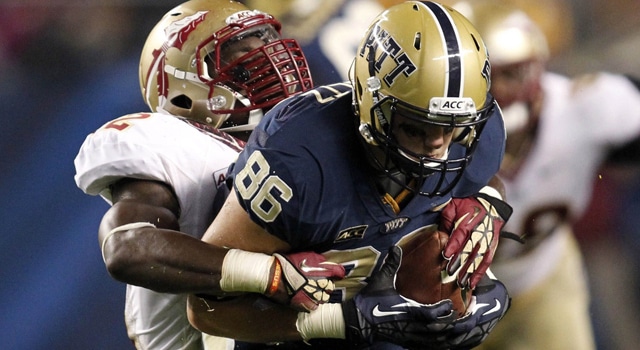 Coming off what can kindly be called a lackluster defensive performance against Navy, the Fighting Irish defense probably didn’t need a whole lot of extra motivation this weekend for Notre Dame’s trip to Pittsburgh.  That didn’t stop Pitt tight end JP Holtz from providing some bulletin board material that is sure to grab their attention this week.

In an interview with the Pittsburgh Tribune Review, Holtz didn’t hold back on how he really felt about Notre Dame.

“Personally, I don’t like Notre Dame at all,” he said. “It’s just going to make me go harder. I just think they’re really cocky and their coaches are really cocky. I just don’t like that. They’re just different people there.”

The article went on to say that Holtz took a recruiting trip to Notre Dame but that it wasn’t somewhere he would want to go to school.

Well, that’s good considering that was never an option for Holtz.   While he was recruited by Notre Dame out of high school, Notre Dame did not extend a scholarship offer to him.  Boston College, Michigan, Michigan State, Penn State, and a few other programs did, but Notre Dame did not even though the Irish didn’t land a tight end in the class of 2012.

Holtz played against Notre Dame last year in South Bend catching a touchdown pass in the third quarter to extend the Panther’s lead to 20-6.  As we all know, Notre Dame came storming back in the 4th quarter to tie the game and eventually won in overtime albeit in controversial fashion after the media noticed the IRish had two #2’s on the field for Pitt’s missed field goal in overtime.

Holtz also mentioned in the interview that Pitt should have won last year’s game and that the Pitt players are using that game as motivation in their preparation this week.  That point is hard to argue with.  The Panthers were up 20-6 in the 4th quarter but still managed to surrender the lead even though they picked off Everett Golson in the end-zone with just under four minutes remaining while holding an eight point lead at the time.

Luckily for Notre Dame fans, the Irish defense came up with a three and out that used up just 32 seconds of the clock and gave Everett Golson and the Irish offense one more chance.  Golson needed just two plays to put the Irish back in the end-zone before taking matters into his own hands on the two point try to tie it up in regulation.

The Irish then went on to win in overtime despite fumbling at the goal line on their first possession to keep their perfect regular season alive.

Last year’s controversy and the way in which the Irish came back a year ago already had enough juicy plot lines for this weekend’s game, but Holtz’s bulletin board has added just a little more fuel to a fire that should have tempers flaring by time the festivities kick off at Heinz Field at 8:00 PM Saturday night.