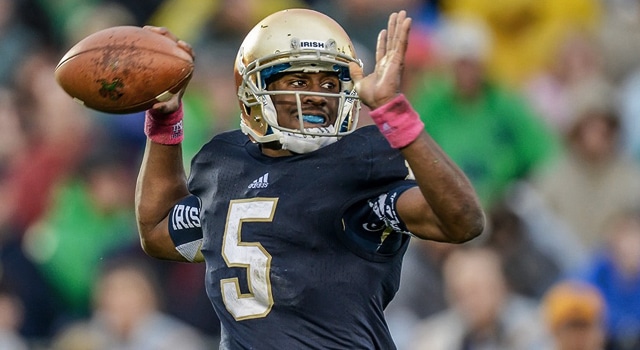 There are many players who will be important for Notre Dame in 2014, but today we identify four Irish players who, individually and together, may well determine the Irish success and final record in 2014.

We here use pivotal based on the root word “Pivot:” something on which an event turns or depends. Certain players are, pretty much, known quantities.  In different ways and on different levels, we know what we can expect (injuries can change this) from Jaylon Smith, Christian Lombard, Sheldon Day, Austin Collinsworth, Tarean Folston, Corey Robinson and Joe Schmidt. But the four players in this article have question marks. Each has excellence within him, but there is nothing so illusive, or frankly, elusive,as unrealized potential. They could go either way. After each player’s discussion, we’ll list the November “one-liner” for each player with both a good spin and a bad spin.

Who is he? The rising star who took off in the second half of 2012 and then held his own against the mighty Crimson Tide? Or the guy who still had a “long way to go” in the Spring and appeared to be in a QB battle with young Malik Zaire? If there is a legit qb battle in August it will mean that Golson has not solidified his position over the “youngster” and that we will no be all we can be. But if Golson takes hold and is, early, and unequivocally, anointed as the starter, we could rise. Golson has a HIGH ceiling. He can not even come close to Marcus Mariota’s running abililty but he can be a much better passer. He spent the time with Whitfield, and his time is now!

Good: “Everett Golson, much improved on his return to Notre Dame, continues to draw comparisons to Russel Wilson, and
will have to seriously consider the NFL draft after the season….

Bad: “Everett Golson, though holding on to the starting job in a tight battle in August with Malik Zaire appears to be adequate, but not elite……

Tall thick and fast, his talent package has been more advanced than his dedication heretofore.  He is not Michael Floyd, but he can be the lead receivers and put tremendous pressure on the defensive secondary. Daniels has the ability to defy single coverage. If he can require a defense to provide help to their lead corner when covering Daniels, and do so ON EVERY SNAP, then that opens up space and opportunity for the younger, and very talented, receivers in the Irish arsenal.

We don’t have a mental scan of what Daniels was thinking in his time away. Did he accept the bit and say “it’s different this time and I’m all in!”
or is he still just a college-age kid who is sorting through life its own self? How much did he miss Golson personally and as a passer, and is he now humming Peaches and Herb’s “Reunited?”.

Good: “Slay the fatted calf, Davaris Daniels’ return has been outstanding, and he is beginning to evoke comparisons with former stud Michael Floyd……

Bad: “Maddeningly inconsistent, Daniels teases us with big days and big plays, then seems as if he’s reliving the movie “Now You See Me, Now you Don’t”…….

Golson and Daniels together. Look, these two combined for 6 receptions for 115 yards against Alabama and that glittering, NFL prospect filled secondary. They were both REDSHIRT FRESHMEN that day. That was 18 months ago, and it would be NATURAL that they could do even better today. Golson to Daniels can become a nightmare for defensive coordinators, the first order of business, and the air and bloodsucking challenge for the opposing coordinators. They don’t need to be Hanratty and Seymour. Just close.

Looks great in the airport and coming off the bus. Each Spring he is anointed as the next defensive breakout player, and each Fall is found wanting. But three things are at play here:

If, in late October, we are astounded at Ishaq, and there is a split of opinion over whether Williams or Day is our best DL, then that portends one set of outcomes. If, on the other hand, in late October, we are unanimous that Williams is okay, but the fourth best lineman after Sheldon Day, Romeo Okwara and Jarron Jones, then that portends a different, less joyous set of outcomes.

Good: “Ishaq Williams, enjoying a new position at DE and the starting job, is finally unleashing his marvelous potential and athleticism. Mel Kiper and Todd McShay both see him as a definite Day Two choice in the NFL draft, with McShay particularly sanguine that Williams’ combine scores will leverage his productive Senior year……

Bad: “Ishaq Williams will always remind us that not all Five Stars become true stars…………

McGlinchey has a massive upside and is a diamond in the rough.  He is 6’8″ and 300 pounds (for now, but Longo will add more lean muscle mass) has the agility of a former basketball player, has been identified by Kelly as having the ability to play tight end if needed, and has the mean streak that OL coach Harry Hiestand requires. He held the right tackle spot in the Spring, had a few first time starter bumps but still has to show enough to hold off Connor Hanratty in the pre-Fall.

McGlinchey, Ronnie Stanley and Steve Elmer are an imposing trio, and have plenty of eligibility left. If McGlinchey can hold off Hanratty, and survive the September four game set with a minimum of rookie mistakes, he may be set for the October gauntlet of Stanford, North Carolina and mighty Florida State. There is a Saturday with no game (September 21) and that is a nice week for Hiestand to smooth off the early rough edges.

McGlinchey has NFL potential. How close, or how far, he is from that Sunday job, when the calendar flips from September to October is a massive pivot point for the 2014 Irish.

Good: “Following the footsteps of Zack Martin, Mike McGlinchey showed that an outstanding player can start for the mighty Irish in their second year of play after redshirting in his first. McGlinchey will be playing on Sundays….

Bad: Locked in a dogfight with Conor Hanratty all season for the fifth starting spot on the ND OL, Mike McGlinchey showed glimpses, but will need another Spring and pre-Fall before he can be fully trusted by Harry Hiestand as a full-time starter……

When Thanksgiving comes will we be celebrating their stardom or wondering what might have been.