Irish Secondary Has Plenty to Prove 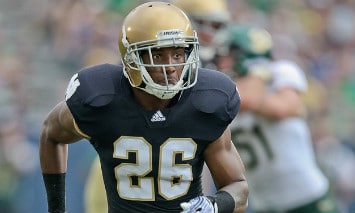 Notre Dame’s 2012 defense will be highlighted by one of the strongest front seven’s in the nation, led by senior linebacker Manti Te’o, and standout sophomore’s Aaron Lynch and Stephon Tuitt.  The Irish secondary, however, is a relatively unproven unit with plenty of questions to answer during the 2012 season.

The Irish secondary will be led by fifth-year senior Jamoris Slaughter.  Slaughter spent the last season as a hybrid between a safety and a linebacker, recording 45 tackles, one interception, and one forced fumble.  He’ll occupy one of the safety spots for Notre Dame this coming season and will be expected to quarterback the inexperienced Irish secondary as one of the few experienced defenders roaming the Notre Dame defensive backfield in 2012.

Likely starting alongside Slaughter at safety will be the only other veteran member of the Notre Dame secondary, Zeke Motta.   Motta has seen significant playing time over the last two seasons recording a combined 90 tackles while returning a fumble for a touchdown last season and recording an interception each of the last two seasons.  Motta has some big shoes to fill with Harrison Smith graduating and departing for the NFL.

With little depth behind Slaughter and Motta, Notre Dame can ill afford for either to go down with injury.  Senior Dan McCarthy who has seen most of his playing time on special teams will provide some veteran leadership while Austin Collinsworth will add much needed depth.  Collinsworth possesses the versatility to play both safety and corner while also being the Irish’s jack of all trades on special teams.

Notre Dame will get sophomore Eilar Hardy back from injury after the Ohio native missed his entire freshman season due to injury as well.   Incoming freshman Nicky Baratti of Texas and Chris Badger who returns from a Mormon mission that has caused him to not play competitive football in two years will be in the mix and could very well be thrown in the fire in the fall.

Unfortunately, Notre Dame has just as many, if not more, questions at cornerback where the Irish will be replacing incumbent starters Gary Gray and Robert Blanton.  The Irish must find new talent to replace them this spring and with the returning cornerback corps being young and inexperienced, it is imperative that they find someone to fill the void quickly.

Brian Kelly mentioned at his press conference to kick off spring practice that junior Bennett Jackson and sophomore Lo Wood enter the spring as the starters.  Despite having only played the position for just over a year a lot is expected of Jackson this coming season.  Jackson has been targeted as the most likely of the cornerbacks to step up and become a standout this season by the Irish coaching staff.  Jackson spent the early part of last season on special teams adjusting to the switch to cornerback from his old position of wide receiver.  Towards the latter part of the season came around, however, Jackson found himself receiving significant playing time in the cornerback rotation.  Jackson has all the tools to be an elite corner, size, length, athleticism, and speed, in fact he has begun running for the Irish track team in the offseason.  Jackson is integral to the success of the Irish secondary and will be expected to be Notre Dame’s number one corner.

Across from Jackson, Lo Wood is the frontrunner to start for the Irish.  Wood was Notre Dame’s first option on the cornerback depth chart after Gray and Blanton to start last season.  As the season went on Wood’s playing time dropped in favor of Jackson.  Wood does not possess the size of the other corners on the Notre Dame team and is critiqued for not being physical enough.  Wood showed he is capable of making plays last year though with his interception return for a touchdown versus Maryland.  The Irish will need more plays like that this season as Wood is the most experienced of the Notre Dame cornerbacks at playing the position at the college level.

Apart from Jackson and Wood the Irish have plenty of potential with the talented yet unproven sophomore duo of Josh Atkinson and Jalen Brown.

Atkinson, brother of standout Irish kick returner George Atkinson III, is a brilliant, raw talent who saw most of his time during his freshman campaign on special teams.  Atkinson is extremely physical and fast.  Atkinson is also regarded by Notre Dame cornerbacks coach Kerry Cooks to have an incredible work ethic.  Cooks stated as a freshman the only thing keeping Atkinson of the field was adjusting to the Irish system.  Now that Atkinson has had over a year to learn the system he has the potential to be a force for the Irish this coming season.

Plenty is also expected of Jalen Brown this season.  Brown didn’t see the field much for the Irish last season but that’s going to change this year.  Projected NFL first round draft pick and Irish receiver Michael Floyd credited Brown for consistently battling him on the practice field as a reason for his success on the field.  Brown is another physical Irish corner; his physicality coupled with his ever-improving footwork allows him to have the potential to be a big factor for the Irish.

Notre Dame suffered an unfortunate blow at corner with the departure of Tee Shepard from the University.  Shepard was expected to see immediate playing time for the Irish.  In fact, many had Shepard penciled in as a starter heading into the season.  His departure, however, leaves the numbers thin for Notre Dame at corner.  As a result of Shepard’s departure Cam McDaniel has been converted from a running back into a corner.

After the departure of Shepard, the Irish ended up not having a cornerback on the roster from the 2012 recruiting class.  Signing Shepard was of the upmost importance for the Irish’s 2012 class with the late decommitment of Ronald Darby at the cornerback position and the late recruiting loss of Anthony Standifer.

With Shepard gone it becomes of paramount importance that the Irish coaching staff can bring in at least three cornerbacks in the 2013 class, preferably two of which that can see significant playing time immediately.  Notre Dame picked up its first commitment at cornerback for 2013 earlier this week when New Jersey’s Rashad Kinlaw committed to Notre Dame, but the Irish will be looking for more.

Two of the Irish’s top 2013 cornerback targets, Eli Woodard and Cameron Burrows, committed to Ohio State early in the process, further amplifying the importance of finding talent at the position to go along with Kinlaw.  Some of Notre Dame’s top remaining targets include Tre Bell, L.J. Moore, Vernon Hargraves, Priest Willis, Kendal Fuller, and Chris Hawkins.  Tre Bell of New Jersey visited for Notre Dame’s junior day and is close friends with 2012 Irish safety recruit Elijah Shumate.  L.J. Moore of Central High (Fresno, Ca) says he talks with Tee Shepard every day.  Chris Hawkins of Rancho Cuchamonga, California is considered to be leaning towards in-state programs.  Hargraves, Fuller, and Willis are some of the top prospects in the entire 2013 class and Notre Dame will likely pursue them relentlessly.

Notre Dame also has its sights set on replacing Slaughter and Motta with 2013 recruits.  Su’a Cravens of Vista Murrieta, California tops the Irish wish list at safety along with Vonn Bell of Roseville, Georgia.

Apart from quarterback play the Irish secondary will be the most scrutinized unit on the team this season.  While the unit is relatively unproven, it is certainly capable of performing for the Irish this fall.  How much the green Irish Irish secondary develops this spring and fall could very well be the difference between a mediocre season and a great season for Notre Dame.