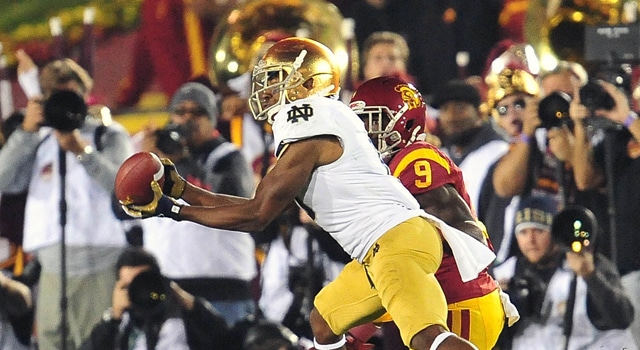 Notre Dame's Keivarae Russell, seen here recording an interception against USC in November, is poised for a breakout season for the Irish in 2013. (Photo: Gary A. Vasquez / USA TODAY Sports)

Today we are kicking off a series of posts that we’ll be running over the next week or two on players who are ready for prime time in 2013 – players who we saw enough out of in 2012 to know that they are ready for staring roles for the 2013 Fighting Irish.  In total, we’ll be looking at six players so we felt it best to start our list of six players with Notre Dame’s #6 – Keivarae Russell.

At this time last year there was some talk about an incoming freshman wide receiver from Washington by the name of Keivarae Russell switching over to defense after the Irish lost a pair of prized cornerrback recruits despite being a highly sought after wide receiver/runningback who looked perfect for the hybrid slot wide receiver/running back role Notre Dame was looking to implement.

By season’s end the idea of Russell playing anywhere byt defense seemed silly after he ended up earning Freshman All American honors.

When Keivarae Russell visited Notre Dame back in December 2011, the Washington native was thought to be one of the top offensive targets for the Irish’s recruiting class of 2012.   Shortly after his visit to South Bend, Russell named Notre Dame one of his finalists along with his home state Washington Huskies and followed up with a commitment to the Irish shortly after.

Russell was considering a prime candidate to play the role of hybrid wide receiver/running back that Notre Dame announced it would be utilizing when they moved Tony Alford back to running backs coach after he spent the 2010 and 2011 seasons coaching wide receivers.  Russell played corner as a junior in high school, but focused on offense his senior season while moonlighting as a safety.

The presence of Tee Shepard and Ronald Darby in 20112 recruiting class made a move to defense an afterthought for Russell at the time he committed as both were top 100 recruits thought to immediately challenge for a starting role.  Darby, however, would end up decommitting and flipping to Florida State before Signing Day.  Shepard meanwhile enrolled early at Notre Dame but left the University before ever taking part in a single spring practice.

Short on numbers heading into fall camp, the idea of Russell moving to corner quickly picked up steam and Brian Kelly announced that Russell would be getting trained at corner during fall camp.  Shortly after the Irish kicked off training camp though, junior Lo Wood suffered an ACL injury and Russell’s move to defense became permanent.

Russell did not just walk into a starting gig last year though.  He had to beat out returning sophomores Jalen Brown and Josh Atkinson for the role – the later of whom had two full springs under his belt already after enrolling early the year before.  Russell proved a quick study though and was named a starter more than a week before Notre Dame’s season opening matchup against Navy.

Just a few months removed from his high school graduation, Keivarae Russell found himself in Dublin, Ireland last Labor Day weekend as the first true freshman to start a season opener at cornerback in Notre Dame history.  Not too much pressure for a kid that Notre Dame had originally recruited to play on the offensive side of the ball.

Russell’s collegiate career got off to a bit of a rough start last September when he blew an assignment that led to a wide open Navy touchdown pass and immediately prompted Notre Dame fans around the globe to wince as we all worried that our concerns over Notre Dame’s green secondary were about to be realized and exploited in the coming weeks by more competent passing games.

In my 5 Things I Didn’t Like column that week, number one on my list was the play of the secondary.  I wrote:

We knew the secondary was going to be a major concern this season, but if Saturday is any indication, it could be worse than we thought. Navy doesn’t have great wide receivers and they were already playing without their top one this weekend yet they were still able to get behind the green Irish secondary on multiple occasions. (September 3, 2012)

Luckily for Notre Dame, that week one performance was the exception and not the norm as Russell and the rest of the Irish secondary rebounded quickly.  Russell recorded his first career interception three weeks later when he picked off Denard Robinson.

A few weeks later he was seen covering Stanford’s Zach Ertz (pictured to the right) – one of the nation’s elite tight ends – one on one.

By the end of the regular season, Russell started all 12 games for an undefeated Fighting Irish squad that slowed down the passing games of Miami, USC, and Oklahoma.  Along the way he picked up another interception in the season finale against USC and was named a Freshman All American by the Football Writers Association for his efforts.

Keivarae Russell, potentially the best corner in the country?

What makes Russell’s performance as a true freshman last year so impressive is that he held up against elite wide receivers despite not playing corner since his junior year of high school and being recruited by almost everyone as either a wide receiver or a running back.  Not only did Russell come in last fall and immediately pick up a brand new position, but he more than held his own.

Notre Dame has been a graveyard for once highly recruited cornerback recruits who failed to live up to expectations for the better part of the last 20 years.  That doesn’t just include the likes of Clifford Jefferson either.  Even when highly recruited corners have come in and played reasonably well such as Darrin Walls or Gary Gray, it’s tough to recall a corner that’s come in and exceeded expectations.

Keivarae Russell does not appear to be headed down that path.  Far from it actually.  Before the BCS National Championship, Notre Dame defensive coordinator Bob Diaco had high praise for this then freshman pupil. “He’ll probably be the best corner in the country before it’s all said and done,” said Diaco in January.

Russell has not done anything since then to suggest that he doesn’t have that potential either.  As he heads into his sophomore year, he will not only have a full year of experience to draw upon this fall, he will also have a full off-season in the weight room to have packed on some additional strength to help him be more physical and effective in run support – an area he was already strong in for a true freshman.

Last year the Notre Dame secondary was seen as a major liability heading into the season.  Just a year later the secondary is one of the strengths of the team thanks in large part to the emergence of Russell.  Bob Diaco’s defenses have not relied too much on the blitz the last three years because the Irish lacked the corners to allow for it.  That should change this fall because of Keivarae Russell and the rest of his secondary mates.