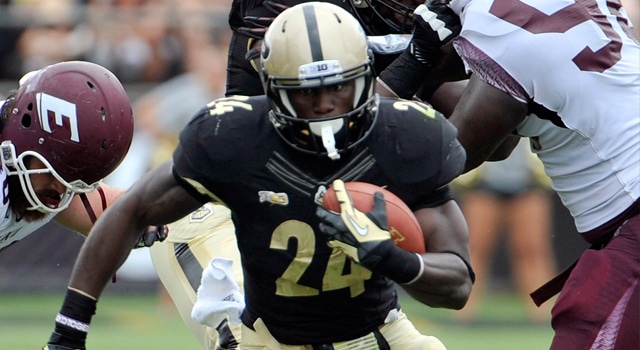 Travis Miller from the Purdue blog Hammer and Rails brings us a scouting report of the Boilermakers.

Note: I also have a scouting report of Notre Dame posted over on Hammer and Rails as well.

On paper the numbers look very good even when you consider they came against a severely overmatched FCS squad. Purdue ran up 547 yards of total offense and six offensive touchdowns with 33 first downs. There was only one punt attempt, which was blocked. In short, Purdue probably could have scored 70 if it really wanted to last week.

Part of the reason it did not score more, however, is a major reason for concern. The offense turned it over four times, with both quarterbacks accounting for two each. Both quarterbacks threw an interception and each had an ugly fumble on keepers. Obviously, this needs to stop if Purdue is going to have success. The defense did not allow a single point after a turnover on Saturday, but things would have been much different if we were playing a quality squad like Notre Dame.

The next major issue is that the starting quarterback did not play a single down on Saturday. Caleb TerBush was suspended, but Danny Hope has already stated that he will start despite Robert Marve throwing for a career high 295 yards and three touchdowns. Marve looked incredibly sharp as well completing 30 of 38 passes. Hope insists that TerBush was the better quarterback in camp and that he is much sharper than last year, but he has also insisted that Marve is an NFL-caliber quarterback.

To me, it is a big risk to start TerBush, but I would be that Marve plays some as well. Rob Henry may even take a few snaps as a wildcat quarterback. The former starter was 7 of 9 passing for 77 yards and a TD last week, but had an awful interception.

The offensive line played well in allowing just one sack despite breaking in three new starters. They were also very effective in the running game. Akeem Shavers ran for 76 yards on 11 carries and added a touchdown. Raheem Mostert looked dangerous with 36 yards on five carries, while Akeem Hunt had a big 46 yard reception out of the backfield.

Purdue spread the ball around well with 12 receivers catching 37 total passes. O.J. Ross, Antavian Edison, and Gary Bush are the starters and all are smaller, quicker receivers. They combined for 21 receptions, 172 yards, and two touchdowns. We also got the tight ends involved more than we have in recent years. Gabe Holmes looked promising with four catches for 43 yards and a score. Crosby Wright had two catches and Justin Sinz caught a late TD pass from Henry.

There are a lot of options here and I am encouraged that four of the turnovers came from two players that may or may not play on Saturday. What concerns me the most is the idea of a quarterback rotation. It worked at times last year, but to me Marve looked really good when he was finally able to stay in and get into a rhythm. TerBush is okay and maybe he really does have a much better command of the offense than last year, but many of our fans our upset that Marve is not the starter after last week. It would probably be reversed if TerBush had played, put up those numbers, and Marve was named the starter after being suspended.

Hope says all three QBs are prepared to play each week, but how that rotation will work out is a mystery. If TerBush comes out and plays well Purdue fans will naturally be happy. If he struggles and Purdue falls behind big people are seriously going to turn against Hope. That is why I have called this the biggest game of Hope’s career so far. He is staking an awful lot on TerBush and the rotation strategy.

Of the three units I think the defense had the best game on Saturday. Again, it was only an FCS opponent, but for the most part Eastern Kentucky did next to nothing despite having one of the best running backs in all of FCS and a couple of big, strong receivers that normally give us fits. The only major mistake was Matt Denham getting loose for a 30-yard touchdown run.

Kawann Short is the unquestioned star of the defense and could be the Big Ten’s Defensive Player of the Year. Some think he will go in the first 15 picks of the NFL Draft. He blocked an extra point and a field goal (his fifth and sixth career kick blocks) and picked up sack No. 13.5 for his career. So far at least he has played like an All-American.

Short is not alone up front. Bruce Gaston, who made his debut as a true freshman two years ago at Notre Dame, gives him a buddy at defensive tackle and the team a stout middle of the defense. Ryan Russell had four tackles and is expected to grow into our next big-time defensive end. I was also pleased with the play of Jalani Phillips in his first major action.Brandon Taylor comes in at defensive tackle on rotations and is solid. he’s also the son of NFL Hall of Famer Lawrence Taylor.

The linebackers are interesting because new defensive coordinator has implemented elements of a 3-4 in addition to our base 4-3. We generally shift now between a 3-4, 4-3, and a 4-2-5 package depending on the situation. Will Lucas had a solid week with a team high six tackles and an interception. Joe Gilliam, Sean Robinson, and Antwon Higgs split time at middle linebacker, which is important considering that Dwayne Beckford, a two-year starter, was kicked off the team days before the opener due to his third arrest. Nnamdi Ezenwa and Robert Maci were effective in a rotation as well. Maci is the top hybrid guy that can play outside or defensive end.

The secondary is very close to being as good as the defensive line. Ricardo Allen and Josh Johnson are two of the top corners in the Big Ten. Allen will be thankful that Michael Floyd is gone, but I am concerned about Notre Dame’s big receivers. Tyler Eifert also presents a difficult challenge, especially if we leave him open over the middle on third and long as is our tendency. So far the new defensive coordinator has done well with this, but I also remember Kyle Rudolph being inexplicably wide open on fourth down.

The safeties shined last week. Landon Feichter, a walk-on, returned an interception for a touchdown and Frankie Williams was named the Big Ten’s Freshman of the week.

This area was pretty much awful last week. We had a punt blocked, an extra point blocked, a fumbled punt return, and kicked a kickoff out of bounds. Paul Griggs and Sam McCartney split placekicking duties with McCartney going 4 of 5 on PATs and Griggs 2 of 2. Griggs is a true freshman while McCartney is a redshirt freshman walk-on from West Lafayette.Griggs will likely try longer field goals and McCartney shorter ones.

Mostert is a dangerous weapon as a kickoff returner and showed he can once again be the top return-man in the nation. He returned a kickoff for a score in out bowl game and in his one attempt on Saturday he returned it 36 yards. Unless the ball is kicked out of the end zone he is a serious threat to return it for a score. He averaged 33.5 yards per return last season on 25 returns, which was No. 1 in the country.

Finally, Cody Webster returns as a pretty solid punter. His one attempt was blocked last week, but he can get about 43 yards per kick. Ricardo Allen was the best returner of three we tried last week with a 25 yard return.

I think Purdue is going to have to win this game with defense. The last few years we have allowed Notre Dame to get in front as our offense struggled early. Eifert is a major concern, as are Theo Riddick and George Atkinson III. Our run defense was flat out awful last year against Cierre Wood. I am happy he won’t be playing, but Riddick and Atkinson are more than capable of running all day on us.

I would prefer to concentrate on the run and make Golson beat us with his arm. I like our defensive secondary a lot and I think we need to get pressure on Golson. That is how we won the last time we won in South Bend. Anthony Spencer, Ray Edwards, and Rob Ninkovich (who are all in the NFL right now) pretty much had a career day against Brady Quinn in 2004 and Purdue got a big lead as a result.

My other major concern is how much the quarterback rotation is going to mess with our offensive consistency. You could say we are used to it after doing it for two years now, but our record on the field and basic football knowledge suggests that you cannot be extremely successful splitting quarterback duties. It’s extremely frustrating to see it as a fan.