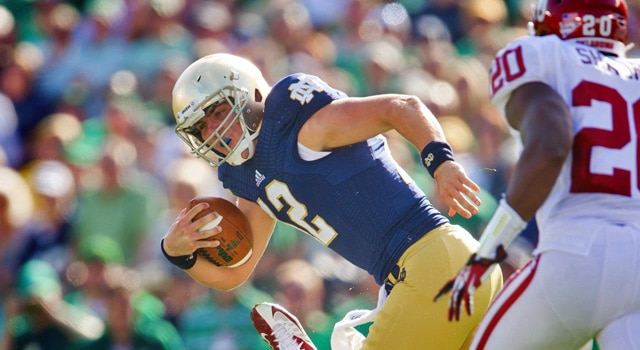 The culmination of Notre Dame’s 2013 football season offers a veritable smorgasbord of storylines: Notre Dame once again overtook Michigan as the all-time winning percentage leader – a distinction lost in 2004 – after its 29-16 Pinstripe Bowl victory over Rutgers and Michigan’s 31-14 thumping at the hands of Kansas State in the Buffalo Wild Wings Bowl. Will star defensive lineman Stephon Tuitt and tight end Troy Niklas enter the NFL Draft early? Should Notre Dame quarterback Tommy Rees, leaving second in program history in touchdown passes, attempt to land a spot on an NFL roster or take head coach Brian Kelly up on his offer to become a graduate assistant and fast-track his way toward a coaching career?

With so many headlines to sort through, it’s not surprising some slip through the cracks. The career of redshirt junior quarterback Andrew Hendrix was summed up with a simple, 24-word tweet from Brian Hamilton of the Chicago Tribune indicating Hendrix will utilize his final year of eligibility at Miami of Ohio with former Notre Dame offensive coordinator and newly appointed head coach, Chuck Martin.

Reticence and humility have been characteristic of Hendrix from the very beginning as a 4-star recruit from Cincinnati. There was no me-first attitude or teasing of fan bases with ambiguous tweets, stringing along the recruiting process. After visiting Notre Dame’s campus and talking with then-Notre Dame head coach Charlie Weis, Hendrix left the Guglielmino Center to discuss his feelings with his mother, lovingly waiting for him in the car. As Andrew began to ponder his future she pulled out a Notre Dame t-shirt and handed it to him, knowing what was in his heart.

Hendrix ended his recruitment on the spot.

Andrew’s career trajectory started with extreme promise, redshirting his first year on campus and having a special quarterback package developed for him during his redshirt freshman campaign. In his first game against Air Force in 2011, Hendrix abused the Falcons defense, completing all four of his passes for 33-yards, as well as chipping in 111-yards on the ground, a feat that managed to place Hendrix in the school record books as the 5th highest one-game rushing total for a Notre Dame quarterback. Unfortunately, his first game would be his best opportunity to rewrite Notre Dame’s records.

A steep learning curve at the quarterback position and the emergence of quarterback Everett Golson, as well as the feistiness of fellow classmate and quarterback, Tommy Rees, made a once-wide open depth chart appear claustrophobic. Many outlets began to speculate Hendrix would transfer.

“You would probably have to be out of your mind to leave here, in all honesty,” the soft-spoken Hendrix told Keith Arnold of NBC Sports in August of this year. “And if you have confidence in yourself, then it’s not hard to stay here. Plus, the school is unbelievable, the people are unbelievable, this organization’s great. It really was never an option in my mind.”

On the outside, football-driven minds may struggle to understand why Hendrix chose not to seek out greener pastures earlier in his career. Given the importance Hendrix’s family places on academics, particularly as he studies to become a medical doctor, it should come as no surprise that he chose to stay.

Several years ago my fiancée, a former member of a college marching band and music enthusiast, and I attended Notre Dame’s midnight drumline under the Golden Dome, one of the finer traditions in college football. While waiting in the frigid fall of South Bend to get a better view, we struck up a conversation with a lovely couple, an exchange that lasted nearly an hour. We discussed where we were from, how we came to love Notre Dame, and how there is just something special about the university that defies definition.

It wasn’t until the drumline was set to begin that they casually disclosed, in the context of our discussion, their son was on the football team. Evaluating the information they had provided from our friendly chat, the light bulb went off immediately.

“You’re Andrew Hendrix’s parents,” I said to his mother, in amazement.

I informed the Hendrix family that I had heard several interviews from Andrew coming out of high school and that he came across as an intelligent, well-mannered young man.

“He had better be!” his mother laughingly quipped.

Notre Dame’s foundation has always been built upon the success of its students, a fact that is repeated annually with football recruits citing the powerful degree and alumni base as a motivating factor to attend the University of Notre Dame. And while Irish fans will cheer the likes of Louis Nix and Stephon Tuitt when they begin their NFL careers, the ultimate success of Notre Dame is built by student-athletes like Andrew Hendrix, who walk away with a Notre Dame degree and become pillars in the community.