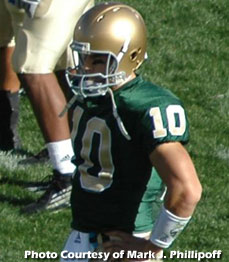 The feature, written by Don Banks, has this to say about Quinn, “A curveball, right? Quinn, but no Matt Leinart, the USC stud who’s in the pole position for the 2006 NFL Draft? You heard us correctly. There are some observers who already believe that Quinn will be an NFL star within three years, while Leinart might never approach his level of collegiate dominance in the pros. Write it down.”

Pretty high praise for a quarterback that had almost as many interceptions as touchdowns heading into this season, but it shows just how far the junior has come in the first year of the Charlie Weis era. Many expected big things from Quinn but 20 touchdowns in 7 games to just 4 interceptions is better than anyone could have hoped for.

The list is somewhat reminiscent of Julius Jones being named to Athlon Sport’s NFL Team of the Decade for 2000-2010 back when he was a freshman for the Irish in 1999. Quinn’s literary honor however comes after a stellar start to the season as opposed to being based strictly on potential.

So far this season Quinn has completed 175 of 266 passes (65.8%) for 2,352 yards with a 5 to 1 touchdown to interception ratio. In the process, he broke the single game touchdown mark with 5 touchdowns against Michigan State and then broke his own record with 6 this past weekend against BYU. He’s also had three 400 yard passing games leading to an average of 336 yards a game.

This feature shows just how far Weis has brought the Irish in the 7 games he has been head coach. For the better part of the last decade, Notre Dame’s offense has had no identity and produced marginal at best results. After 7 games this season however, Weis has the Notre Dame offense humming and the Irish have scored under 30 points only once this season.

It also shows how far Quinn has come after taking a beating the last 2 years as the starter for the Irish. Quinn took his lumps his first two seasons and the tutelage of Weis has turned Quinn into a bonafide future first round draft pick.

This will also further fuel any rumors of Quinn leaving for the NFL after his junior year. There has been speculation by some that Quinn could leave for the NFL after this season, but as of now that doesn’t look too likely.

RELATED
Reminder: Notre Dame Football Will Not be Forced into the ACC

Quinn was also up for USA Today’s player of the week, but was beaten out by Smith. Quinn did however win the fan voting with 43% of the fan votes. 24,782 fan voted in the poll with Michael Robinson coming in second with 41% of the vote.