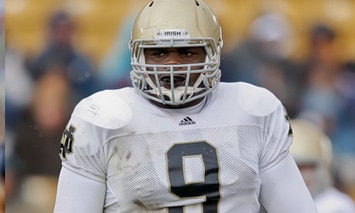 We continue on with the countdown of the top 25 players for the 2011 Fighting Irish.

In case you missed the first installment, check it out.  (And no, I have not forgot about our best of the 2000’s series – I’ll finish that up soon).

Keith over at Inside the Irish has the rankings for the #20-16 posted along with some great commentary from all of the bloggers participating.  Be sure to head over and give it a read as it’s interesting to see how varied opinions on some of these players are.

20. TJ Jones (WR, Soph.) – This seems like a pretty good ranking for Jones.  As you’ll see below, I only had Jones ranked one spot higher in my rankings.  I actually think having a healthy Theo Riddick will increase Jones’s production as if you look back at 2010, Jones was more effective when Riddick was healthy.  Another full off-season should help Jones hold up this year too.

19. Louis Nix (NT, Soph.) – I had Jones and Nix flip flopped in my rankings and the only reason I had Nix this low is because I wasn’t sure how many plays he would be ready to handle this year.  Once Nix gets to the point where he is an every down lineman, LOOK OUT.  Nix was dominant at times in the Blue-Gold game throwing offensive linemen around.

18. Braxston Cave (C, Sr.) – Cave was tough to project because its not clear yet if he will be able to fully transition from a power lineman to a more athletic one like Kelly’s offense calls for.  I expect Cave to be better in 2011, but just how much I’m not sure.

17. Tommy Rees (QB, Soph.) – Rees is the toughest player to project on the roster since there’s a chance he could play very little if Crist wins the starting QB job (and I still think Crist will).  Rees is more than solid as a #2 QB though and given Crist’s injury history, it’s good to have a backup QB this highly thought of.   17th was right where I had Rees pegged.

16. Prince Shembo (OLB, Soph.) – This is a pretty good ranking for Shembo.  I actually have him a bit higher, but given the emergence of Danny Spond this spring, there is no guarantee that Shembo is the full time starter this fall.  That said, I fully expect him to start and play very, very well.  What’s most surprising here is that he was completely left off of one ballot.

How I Had Them Ranked

20. Louis Nix (NT, Soph.) – As I mentioned, Nix ended up being ranked right around where I had him.  In next year’s rankings though I’ll be disappointed if Nix isn’t in the top 10.

19. TJ Jones (WR, Soph.) – Jones faces an important season already as a sophomore with the talent Notre Dame has coming in this year and next the receiver position.

18. Kapron Lewis-Moore (DE, Sr.) – Ok, I’ll admit that I may have underrated KLM pretty much.  If I had to redo my rankings, I would flip flop KLM and Aaron Lynch.  That said, I think by seasons end there might not be much of a drop off between the two.

16. Aaron Lynch (DE, Fr.) – Only Keith at Inside the Irish had Lynch this high in his rankings.  As I said in the first installment of this series though – it’s impossible not to get excited about Lynch’s potential after the Blue-Gold game.

20. Darrin Walls (CB, 5th) – This ended up being a pretty fair ranking for Walls.  He was solid in his final season in South Bend, but didn’t really standout all that much.  His interception return against Army was certainly nice though.

19. Gary Gray (CB, Sr) – Gray ended up being much better than the 19th best player on the team by the end of the season and he enters 2011 as one of the best on the squad.  He’ll be making an appearance higher up in the rankings.

18. Harrison Smith (s, Sr.) – Of all of last year’s voters, I actually had Smith the 2nd highest but even this was too low.  I’ve been a fan of Smith’s for a while and loved seeing him start to fulfill his potential last year.  Expect a big year out of Smith in 2011.

17. Zack Martin (LT, Soph.) – I love that this ranking turned out to be too low because it means Notre Dame might just have a legit left tackle for the next few seasons.

16. Kapron Lewis-Moore, (DE, Jr.) – This is probably right around where KLM ended up being by the end of the season.  He was solid and improved in 2010.