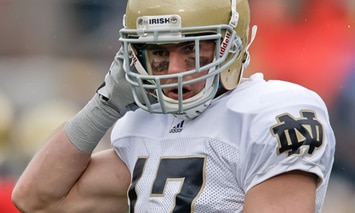 Zeke Motta has the potential to be ranked higher if he can hold off Jamoris Slaughter for his starting spot in 2011. (Photo / IconSMI)

For the second year in a row, UHND will be participating in a countdown of the top 25 players on the Notre Dame roster.  Last year was a lot of fun and this year we’ve improved the process and should have some great posts to read across all of the ND sites participating.

First off, we’ll start with the changes to the process.  Last year each site published it’s own rankings and linked back and forth with each other.  This year we did our rankings a little early and then I dusted off some Excel skills and calculated a composite top 25, much like the actual top 25 polls, that we’ll all use.

Next, we have the participants.  Keith Arnold from Inside the Irish is the originator of the idea and organized everything again this year.  My fellow voters also includes DomerMQ of HerLoyalSons.com, Eric Murtaugh of OneFootDown.com, Matt Mattare of WeNeverGradute.com, Matt & CW of RakesofMallow.com.

Now that we’ve gotten that out of the way, on to the rankings. Keith posted the first set of five rankings on Thursday and there weren’t too many surprises.

25. Taylor Dever (OT, Sr) – Dever is a solid right tackle who will be starting for the second straight season.  I didn’t have Dever on my ballot, but it’s hard to argue with his inclusion as he was very solid last year and should improve with the rest of the line as they become more familiar with the offense and benefit from having the same blocking schemes for back to back seasons after having 3 offensive line coaches over the last 4 seasons.
Highest ranking: 16th. Lowest ranking: Unranked (3 times)

24. Chris Watt (OG, Jr) – Watt is another player I didn’t have ranked but did consider having him in the top 25.  I really think Watt has the potential to be a great interrior lineman for Notre Dame at some point, but I just don’t know if 2011 will be when.  Four other voters didn’t include Watt so this ranking seems pretty fair for the junior.  If there’s one player in these rankings that has the chance to be much higher at the end of the season though, its Watt.  DomerMQ has a lot of faith in Watt ranking him 12th.
Highest ranking: 12th. Lowest ranking: Unranked (4 times)

23. Zeke Motta (S, Jr) – Motta is in a similar situation as Watt – he’s got the potential to be ranked much higher by season’s end.  Right now though, he’ll have to hold off Jamoris Slaughter for his starting spot.  If he fends Slaughter off, I think Motta will have a very good season for Notre Dame.  I’ve always had high hopes for Slaughter though so I still think he can wrestle the job back.  Either way the Slaughter-Motta showdown should be one of the best position battles to watch in camp.
Highest ranking: 19th. Lowest ranking: Unranked (2 times)

22. Aaron Lynch (DE, Fr) – This ranking surprised me.  I know Lynch is just a freshman, but he looked like any but a freshman in the Blue-Gold game and I fully expect Lynch to be on the field early and often.  I had Lynch ranked the highest at #16 among the panel of voters.  At season’s end I think we’ll look back at this ranking and realize how low it was.
Highest ranking: 16th. Lowest ranking: Unranked (2 times)

21. Carlo Calabrese (ILB, Jr) – Our first player to show up on every ballot, Calabrese comes in ranked right about where he should be at this point.

How I Had Them Ranked

25. Ishaq Williams (OLB, Fr) – It’s tough to place the freshmen on these lists, but I have to think that Williams is one of the top 25 players on the Irish roster already.  He may not start this year, but like Lynch, he is going to contribute and could end up serving in the same role Prince Shembo served last year – situational pass rusher.

24. Carlo Calabrese (ILB, Jr) – I had Calabrese a few spots lower than the consensus because I think he will still struggle at times in coverage this year.  Against the run though, Calabrese is more than solid and should be steady again this year.

23. Bennett Jackson (CB, So) – It’s tough to determine how much Jackson will play at corner this year as he makes the transition from wide receiver, but I definitely think he is one of the top 25 players on the Irish roster because of the contributions he’ll make on special teams as a returner and a gunner. Jackson was the special teams player of the year for Notre Dame last year and could end up being it again this year.

22. Braxston Cave (OC, Sr) – Cave will make an appearance in a little while, but my thoughts on having him lower than most are similar to my thoughts about Calabrese.  Cave is more of a power lineman than an athletic one and might still struggle a bit at times this year.

21. Stephon Tuitt (DE, Fr) – Tuitt ended up not making the list, but he’s another freshman that will be hard to keep off the field.  I wouldn’t be surprised if he was getting quality reps at defensive end by the end of the season along with sophomore Kona Schwenke.

25. Shaquelle Evans (WR, So) – Whoops.  I had high hopes for Evans, but unfortunately he didn’t last too long under Brian Kelly and ended up transferring to UCLA.  After seeing the field very early as a freshman in 2009, Evans fell off the depth chart and never returned.

24. Jamoris Slaughter (S, Jr) – Had Slaughter remained healthy last season this ranking would have been reasonable, but after battling injuries Slaughter lost his starting gig to Zeke Motta and will have to fight to get it back in 2011.  Slaughter was only present on one ballot this year.

23. Nick Tausch (So, K) – I felt pretty good about Tausch holding down the place kicking duties in 2010, but David Ruffer had other plans.  Not only was this ranking off, but Ruffer ended up being much better than this ranking as well.

22. Robert Blanton (CB, Jr) – This one looks about right after looking back at the season.  Blanton was solid, but was the third corner most of the season.  This year I have Blanton ranked much higher though.

21. John Goodman (WR, Jr) – Goodman was on the field a lot in 2010 but didn’t have the impact to warrant this ranking.  As a punt returner, Goodman’s biggest contribution was consistently fielding the punts albeit if they were mostly fair catches.  As a receiver, Goodman struggled with consistency and drops throughout the season.  Goodman didn’t make my rankings this year and could be passed by some of the younger receivers early in camp.