Notre Dame did not look overly impressive in their five point win over Pitt on Saturday, but thanks to the first really wild Saturday of the season, the Irish moved up one spot in both polls to #4.   Georgia’s 20 point loss to LSU opened up a spot for the Irish to move up.

Ohio State took Georgia’s #2 ranking after struggling themselves this weekend with Minnesota while Clemson checks in right ahead of Notre Dame at #3.  While these rankings do not determine the playoffs, this group is generally considered the quartet of teams that would be in the playoffs if they started today.

LSU moved all the way up to #5 this weekend following their beatdown of Georgia.  They will be very interesting to watch when the first playoff rankings come out October 30.  They have a very impressive resume and their only loss is to #11 Florida.  There will be a lot of chatter – specifically from SEC country – that LSU should be ranked over Notre Dame in the playoff rankings even if the Irish are still unbeaten on October 30.  Luckily for the Irish, two of LSU’s previous wins over ranked opponents – Auburn and Miami – are no longer ranked.

Michigan was one of the biggest movers in the polls this week and their gains actually help Notre Dame.  Michigan moved up to #6 in the AP Poll and #8 in the Coaches Poll after beating up on an overrated Wisconsin team in the Big 10 Pillow Fight of the Week.  Even if the massive jump for beating an overrated team is undeserved, it does help Notre Dame’s resume since they can point to their opening weekend win over Michigan.  The Wolverines have some more tough games coming up so their ranking will either soon be actually earned or they’ll drop back down to earth.

Stanford is just outside the top 25 right now even though they were on the bye this weekend.  They did move back into the top 25 in the Coaches Poll, but we all know of both of these polls which are both pretty meaningless these days, the Coaches Poll is generally even more laughable.   The Cardinal travels to Tempe on Thursday to take on the Sun Devils.  Hopefully for Notre Dame’s resume, Bryce Love is healthy and can fuel a second half run by Stanford.

USC is just outside the top 25 as well after their upset of previously unbeaten Colorado this weekend.  The Trojans do not play any ranked teams between now and their regular season finale against the Irish.

If USC moves into the top 25 in the next few weeks, it looks like they are the only possible remaining opponent to be ranked when the Irish face them the rest of the season.  For the sake of resume building having Stanford back in the top 20 and it would be even better if Virginia Tech could rattle off a couple of wins to move back into the rankings.  None of their remaining opponents are currently ranked. 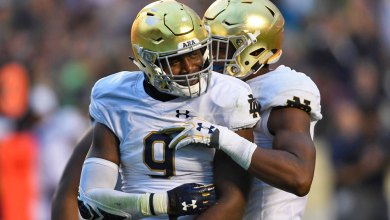 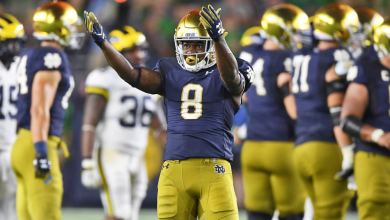 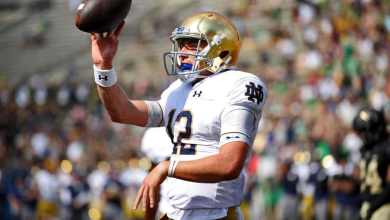 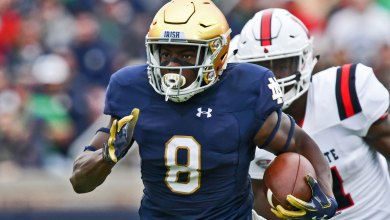