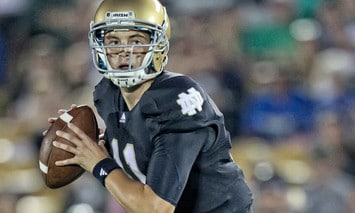 Tommy Rees may not look like a typical starting college quarterback when you see him without a football uniform on, but on Saturday afternoon he certainly looked like Notre Dame’s starting quarterback during the 2nd half of Notre Dame’s season opening loss to South Florida.

Ress lost the starting quarterback derby to Dayne Crist last week and at the time Brian Kelly said that he anticipated Crist being his starting quarterback for all 13 games in 2011.  Well, one game into the season, it looks like that won’t be the case at all.  While Crist struggled in the first half despite the presence of a strong running game, Tommy Rees moved the Irish offense with much more consistency and put points on the board.

A few plays into the game, Crist was making it obvious why he was named the starter last week.  He completed 6 of his first 8 passes for 95 yards and moved the offense to the one yard line before Jonas Gray’s fumble was recovered by South Florida and returned 97 yards for a touchdown.

Crist had the Irish on the move again to start the second quarter with another trip inside the South Florida five yard line.  After a touchdown run by Cierre Wood was called back for holding and a potential touchdown pass was dropped by TJ Jones, Crist made a terrible throw to Theo Riddick that was intercepted for a touchback.

After that interception, Crist was just not the same.  Despite missing on only two of his first eight attempts, Crist ended up completing just one of his next seven attempts for no yards and the interception.

Rees, 4-0 as a starter last year, started the second half for the Irish and like Crist’s first drive, he marched the Irish inside the USF 5 yard line.  On first and goal from the five yard line Rees fired a pass to TJ Jones on a crossing route, but the sophomore receiver never looked for the ball and it careened off of his head and into the arms of South Florida linebacker Michael Lanaris for Notre Dame’s third red-zone turnover of the game.

Rees rebounded nicely though and on Notre Dame’s next possession he connected with Tyler Eifert for 37 yards on 3rd and 10 and then two plays later he threw a pretty pass to Michael Floyd for a 25 yard touchdown for Notre Dame’s first points of he game.  By the time the game was over and the lightning stopped, Rees threw for 296 yards on 24 of 34 passing (70%),

Stats aside, Rees also carried himself with more confidence and composure even after bad plays like the interception that hit Jones in the head.   Once things started to snowball for Crist you could just tell he was losing his confidence.

Now, Rees was far from perfect.  After the second weather delay, Rees came out and threw an interception on the first play.  He had Tyler Eifert streaking down the field on a wheel route with single coverage.  Instead of throwing it up for Eifert he scrambled and forced a throw across his body into double coverage and got picked off.  Plays like that are going to happen with a young quarterback though and if Notre Dame has to live with the occasional interception  in exchange for 300+ yards of offense in a half, then so be it.

Despite some poor decision making from Rees, there was a lot to like about his game and the progress he made this off-season.  Rees showed a stronger arm that allowed him to make throws he couldn’t have made last year.  For instance, his 37 yard completion to Eifert was fight in a very tight window – a window he couldn’t have made it through a year ago.

Brian Kelly was non-committal about his starting quarterback for next week when Notre Dame travels to Michigan, but anyone who watched Saturday’s game knows Rees made the decision for him with his performance and honestly, its the only decision he can make after today.

I sang the praises of Crist all summer long as the answer for Notre Dame at quarterback because he has a much stronger arm and great mobility, but as we learned today those two things don’t matter much when passes aren’t delivered accurately.

Rees, whose arm has definitely gotten stronger since last year, showed much better accuracy and touch on his passes.  Notre Dame wide receivers dropped a lot of passes on Saturday and it’s not a coincidence that most of them occurred when Crist was in the game.  Rees just delivered a more accurate and catchable ball.

While Rees may not look like he came straight from central casting like Crist, he looked every bit of the part while he was on the field and it looks like he should be the starting quarterback for the rest of the season.