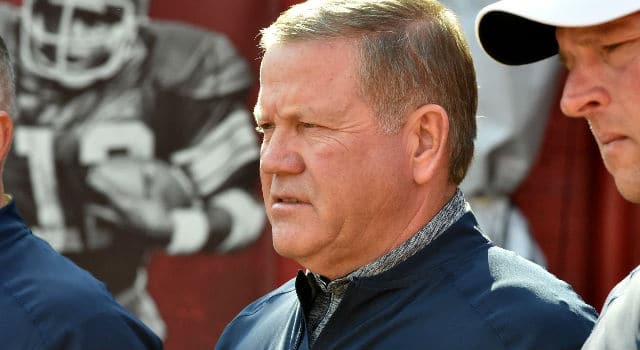 Hours after the Notre Dame season ended with a blowout loss at the hands of USC, reports surfaced that Brian Kelly was exploring his options.  Those rumors were refuted by Kelly in the middle of the night with a 3:30 AM early Sunday release.  A couple days later the circus surrounding Kelly continues.  A report from USA Today states that last year a conversation on Kelly’s behalf took place with arch rival USC last year during the Trojans search for a head coach.

The tension between Notre Dame, Kelly and his agent Trace Armstrong dates to last season when, according to a person with knowledge of the situation, there was at least a conversation on behalf of Kelly with Southern Cal, who ultimately gave the job to Clay Helton. After that, Notre Dame awarded Kelly a six-year extension, and you can’t blame the school for being upset that its loyalty is being repaid less than a year later by rumors that he’s looking to leave.

If true, that’s a bit of a bombshell that shockingly, no one is talking about today.  Some will say that it’s just an agent doing his job on behalf of his client, but at some point, loyalty needs to be a part of the job description for the head coach at Notre Dame.  The head coaching position at Notre Dame is not a launching off point or a bargaining chip and shouldn’t be treated that way.

None of this should be all too surprising though.  Kelly’s infamous flirtation with the NFL and the Philadelphia Eagles on the heels of the blowout loss to Alabama in the BCS National Championship almost four years ago suggested that Kelly wasn’t exactly fully committed to Notre Dame and that he could one day leave on his own.  Four years later, it’s entirely possibly  that Kelly might end up leaving involuntarily.

Kelly now sits alone in first place with the most losses of any Notre Dame coach of all time with 31 – one more than Lou Holtz.  Holtz, however with 100 games to go with his 30 losses and 1 tie.  Kelly has won just 59 games to his 31 losses in seven seasons at Notre Dame.  Average that out and you get a little over 8 wins a season and more than 4 losses.

The hostility between Kelly and Notre Dame fans is also on the verge of reaching a boiling point and Kelly finds himself securely in first place on the Coaches Hot Seat Rankings.  All the while Notre Dame Athletic Director Jack Swarbrick has been quiet since the season ended.  Swarbrick gave Kelly the dreaded voted of confidence following Notre Dame’s loss to Stanford in October, but with rumors and speculation flying, he’s let Kelly twist in the wind since this disastrous season finally came to an end.

Swarbrick’s silence is not doing the Notre Dame recruiting efforts any favors.  Notre Dame just lost 4-star linebacker commitment Pete Werner this morning and the commitment of defensive back Elijah Hicks is reportedly hanging on by a thread.

All the meanwhile, some in the national media are loudly questioning how Notre Dame can continue to support Kelly.  As are some in the local media.  The question remains, however, if the powers that be at Notre Dame are questioning the same behind closed doors.  Without some sort of statement from Swarbrick reiterating Kelly will be back in 2017, rumors and speculation will continue to swirl.

For now, the silence is deafening though.