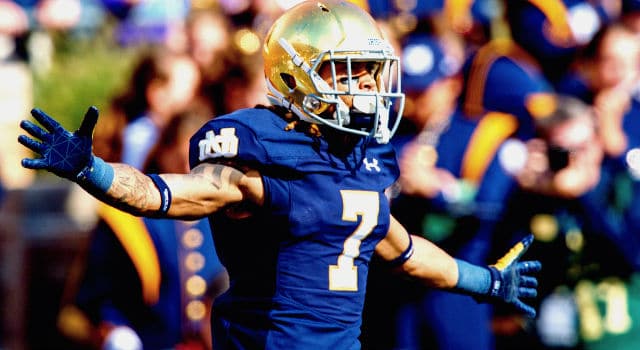 File this under the huge and unexpected – at least this soon – news category.  Notre Dame star wide receiver Will Fuller is reportedly returning to Notre Dame in 2016 for his senior season according to multiple reporters on Wednesday evening.

Mike Vorel of the South Bend Tribune was the first to report the news:

#NotreDame WR Will Fuller said he will return for his senior season in 2016.

Ever since Will Fuller started making opposing defenses the subject of his own personal highlight reel last year people began speculating as to whether not the speedy wide receiver would play out all four seasons in South Bend.  Then Fuller continued where he left off last year and added in a flare for the dramatic in 2015 with game winning touchdowns in the final minutes against Virginia and Temple on the road.

Add it all up and many felt that Fuller – a player many draft pundits have projected as a potential first round pick – would leave for the NDL following this season.

Apparently the junior from Philadelphia has other plans.  With Fuller back in 2016, the Notre Dame offense – which is already on a pace to gain more yards a game this year than it has in over 40 years – figures to once again be one of the best in the country.

Notre Dame has several players who will have tough NFL decisions to make this year.  Jaylon Smith, Keivarae Russell, Cole Luke, and CJ Prosise all will have eligibility left in 2016 but could garner a lot of NFL interest – Smith most likely as a potential first round pick.  Keeping Fuller on campus is a huge coup for the Notre Dame staff and is arguably the biggest “recruit” of the year for Brian Kelly.

By coming back for a senior season, Fuller will have the opportunity to completely rewrite the Notre Dame record books at wide receiver.  Fuller is already on pace to break the single season receiving touchdown mark and Michael Floyd’s career mark will be well within his sights in 2016.

Making such an announcement now is rare for someone with 1st round potential and speaks volumes about Fuller’s character in wanting to address the subject now instead of letting it linger.  Jac Collinsworth may have summed it up best though.

Nothing but respect for Will Fuller. Once again avoiding attention & addressing it early.

See you next year pal.

Notre Dame will have plenty of questions on offense next year such as who will be the quarterback with Malik Zaire coming back from injury and Deshone Kizer leading the Irish on a playoff run, but it looks like one thing we do know is that whoever is throwing the ball for the Irish will have one of the all-time great receivers in Notre Dame history to throw to for one more season.

Meanwhile, opposing cornerbacks around the nation held a moment of a silence on Wednesday for all of their fellow cornerbacks who will be forced to cover Fuller for one more season.