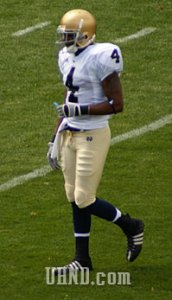 According to Mike Frank’s Irish Sports Daily, cornerback Gary Gray will be returning to Notre Dame on June 1.

“There was never a question,” he said. “He was happy there, he fell in love with not just the football program, but the University. A lot of people dream of going there and there was never any question that he was going back.”

The entire report from ISD has some great quotes and is definitely worth a read.

Gray did not make the trip to Hawaii for the bowl game and was not enrolled at Notre Dame this spring after playing quite a bit in 2008.  He picked off two passes this past season as a backup corner and will most likely serve a backup role again in 2009.

This is indeed great news.  Notre Dame will be absolutely loaded at cornerback this year with Darrin Walls, Raeshon McNeil, Robert Blanton, and Jamoris Slaughter all coming off of impressive springs, but McNeil will exhaust his eligibility this year and with a great senior year, Walls could be playing on Sundays next year.

Gray still has three years of eligibility and his return will give Notre Dame another very talented corner who is more than capable of playing meaningful downs.  His return could also allow Notre Dame to move Slaughter or freshman EJ Banks to safety where the Irish don’t have nearly as much depth.