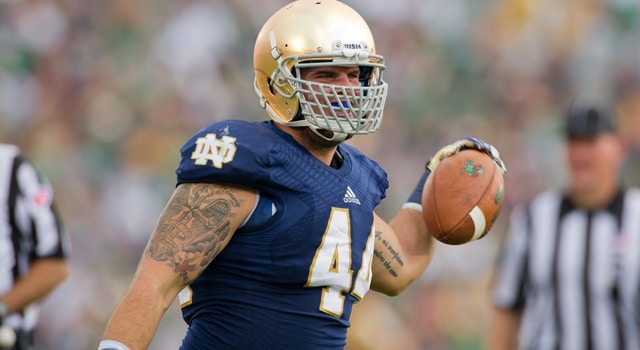 Notre Dame sent its seniors off with a quality victory versus a solid BYU team at Notre Dame Stadium.  The Irish did so by getting back to their identity with a physical effort championed by a dominant rushing attack and solid defense.  They’ll need an identical effort to beat one of the most physical teams in the nation in the Stanford Cardinal.  The game will be decided in the trenches as it was last season and with a win Notre Dame’s season will look a lot better when all is said and done.  Notre Dame must control these matchups to steal a win in Palo Alto:

It’s no secret Stanford likes to run the ball, specifically in between the tackles, which means Irish linebacker Carlo Calabrese will need to be at his best.  Calabrese has been a catalyst physically for the Irish all season with a team leading 76 tackles.  Gaffney represents the definition of a horse at the running back position.  The senior has carried the ball 251 times for 1296 yards and 16 touchdowns.  Gaffney is relentless and will run through arm tackles with ease so Calabrese and the rest of the Irish defense will need to be at their best.

When Stanford isn’t running the ball they look for Ty Montgomery in the passing game to make plays.  Montgomery has a team-high 50 receptions for 822 yards and nine touchdowns so far this season.  Montgomery is a well-rounded receiver so Russell will need to stay honest in his coverage.  Russell has 47 tackles and a team high five pass breakups on the season and has done a solid job of shutting down the opposition’s number one target for the majority of the season.

In his last regular season game for Notre Dame Zack Martin will need to protect Tommy Rees from dangerous pass-rusher Trent Murphy.  Martin will break Sam Young’s consecutive start record for Notre Dame this week and will need yet another consistent effort against an edge pass-rusher.  Murphy has a team high 19 tackles for loss and 13 sacks from his outside linebacker spot.  He’s also excellent at swatting the ball down at the line of scrimmage so the Irish must try to avoid obvious passing downs like third and long.

The Irish running back committee will need to pace the offense yet again versus the Cardinal.  When the Irish run the ball they win games it’s that simple so Folston, McDaniel, and Atkinson III will need to all use their respective skill sets efficiently versus Shayne Skov.  Skov is relentless linebacker who leads Stanford with 85 tackles and two fumble recoveries.  Skov is yet another symbolization of the physical brand of football Stanford wants to play so the Irish backs will need to get the tough yards against him to be successful.