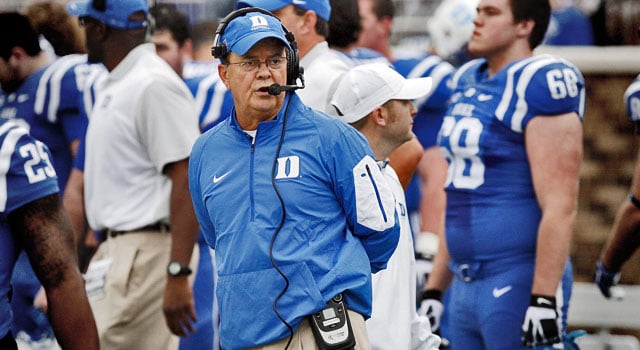 David Cutcliffe never coached a game inside Notre Dame Stadium as an Irish assistant but will get his chance this fall as head coach of Duke. (Photo: Mark Dolejs // USA TODAY Sports)

Week four of the 2016 Notre Dame football schedule brings another former Notre Dame assistant coach to town.  David Cutcliffe, Charlie Weis’s original quarterback coach in 2005, leads the Duke Blue Devils to town September September 24.  Health problems prevented Cutcliffe from ever coaching  game as part of Weis’s staff, but since returning to coaching Cutcliffe has the Blue Devils on the rise.

Coming off the school’s first bowl game victory since 1960, the Duke Blue Devils continue to take steps toward making their football program as noteworthy as the school’s legendary basketball squad. As the fourth opponent on the Notre Dame football schedule on September 24, head coach David Cutliffe has lineup questions to answer.

The Duke offense took a major hit when mobile QB Thomas Sirk went down with a torn Achilles tendon in February. While his rehabilitation has supposedly been much quicker than expected, the delicate nature of this injury makes his status to start the season a question mark.

If that return is delayed for a few weeks, the Irish could take advantage of Sirk’s rustiness. If he’s not able to play at all, look for junior Parker Boehme to line up behind center.

Even if Sirk is healthy, the Blue Devils skill position players will need to step up. Shaun Wilson and Jela Duncan should get most of the backfield carries, with Wilson giving clear indications in 2015 that he could be a game-breaker with an 85-yard TD run and an 89-yard TD reception.

The receiving corps has Anthony Nash as the main wideout after 32 catches in 2015. He closed out the regular season strong, then added to his stature with impressive play in the spring. Production from the tight end slot is imperative, with Erich Schneider another player who needs to make his mark.

The underrated offensive line could get a major boost if right guard Tanner Stone can bounce back from back surgery. Two key lineup changes in this area that need to be addressed are at center and left guard.

Duke is joined by Virginia as the two teams that have to replace the most starters within the ACC. In some cases, that could be good news but is currently something that could make Duke one of the weaker opponents on the 2016 Notre Dame football schedule.

This contest could see the Irish exploit the Blue Devils weak defensive line that only compiled 17 sacks last year. No potential standouts were added to this contingent during the offseason, so expect the Irish to craft a pass-happy game plan for this matchup.

Two sophomores at linebacker are rising stars at Duke, with Ben Humphreys collecting 11 tackles during the team’s win at the Pinstripe Bowl, while Tinashe Bere finished the season with 58 tackles. If the Blue Devils can mount a pass rush against Brian Kelly’s squad, these two will likely do the heavy lifting.

The secondary is headed by DeVon Edwards, who broke triple digits in the tackle department to lead Duke, which isn’t a good sign for a defense. Still, Edwards can play at both corner and safety and won All-Conference accolades. Joining him will be Byron Field, who missed all of last year due to injury.

Edwards is the key man in this area as well, coming off a school record three touchdowns on kickoff returns and winning All-America honors in that area. For his career, he’s crossed the goal line six times on special teams.

When it comes to the kicking game, the Blue Devils will have to replace the tandem of PK Ross Martin and P Will Monday. Their untested replacements will get a serious test when performing in the cauldron that is Notre Dame Stadium.

Notre Dame and Duke have only played each other four times overall with the Irish sporting a 3-1 record against the Dukeies. The most recent showdown between the two came during the forgettable 2007 season for Notre Dame.  The Irish headed into Senior Day that season without a win at home and just a single win on the season.  That changed with a 28-7 victory for the Irish.

Then freshman quarterback Jimmy Clausen threw three touchdown passes that day – one each to John Carlson, Duval Kamara, and David Grimes.  Freshman Robert Hughes ran for 110 yards and scored the other Irish touchdown while the defense nearly pitched a shut out.

The highlight of the game, however, came in the waning moments when Weis inserted safety Tommy Zbikowski at quarterback during the 5th year seniors final game in Notre Dame Stadium.  After a long and brutal season, seeing Zibby line up at quarterback was one of the few bright spots of the entire season.