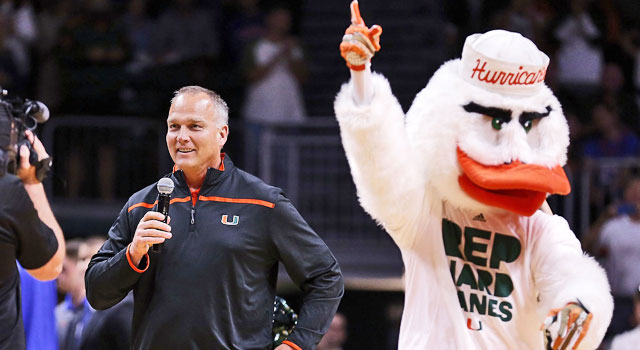 Mark Richt in one of several coaches in their first years at their respective schools Notre Dame will face in 2016 (Photo: Steve Mitchell - USA TODAY Sports)

For the first time since 1990, the 2016 Notre Dame football schedule has a home game with the Miami Hurricanes on it. While the bitter rancor that once marked this matchup has cooled off, Miami wants to prove something with their new coach Mark Richt getting his tenure started.

Richt knows offense and will handle the play-calling, giving junior quarterback Brad Kaaya the chance to expand on his 2015 production. Kaaya’s ability to compile yardage and not give the ball away could make things difficult for the Notre Dame defense.

Richt has a trio of productive considerations in the backfield. Joe Yearby broke the 1,000-yard threshold, but has to contend with Mark Walton, who had a strong spring practice. Rounding out this group is Gus Edwards, a player that saw his 2015 come to an abrupt end with a foot injury.

Kaaya currently only has one strong wide receiving target, though Stacy Coley is a dangerous weapon that the Notre Dame defense has to neutralize. Coley’s 47 catches accounted for 689 yards of offense, but either Braxton Berrios or Sam Bruce need to offer another option.

Right now, those options are located at tight end, most notably in the form of David Njoku. He brings size and the speed to get deep and will be joined by Chris Herndon in this area.

The Irish pass rush needs to exploit the weakest part of the Hurricane offense, the line. Despite Yearby’s productive year, the run blocking struggled all season. Kaaya’s health might be in danger if the sacks that were allowed during the spring surface in games like this one on the Notre Dame football schedule.

The offense for Miami has all but two starters returning. However, that’s somewhat misleading when taking into account the front line. On defense, seven starters are back, yet it’s the newcomers that will likely determine the course of the season.

Shifting from the 3-4 to 4-3, the Miami defense is one where potential is the key word. On one end, Al-Quadin Muhammad could make things difficult for the Notre Dame passing attack. That concern might become more pronounced if Chad Thomas finally lives up to his potential on the other end.

Despite Muhammad’s flair for pass rushing, the Hurricanes garnered just 18 sacks all last season. Improvement by tackles like Courtel Jenkins, Gerald Willis and Kendrick Norton can enhance those numbers.

Senior Jermaine Grace led Miami with 79 tackles in 2015 at linebacker and has the speed to chase down runners. Grace will get back Darrion Owens for this unit, but Owens is coming off a severe knee injury.

However, the Hurricanes’ fate against the Irish and other major teams likely depends on how quickly true freshmen like Shaq Quarterman, Zach McCloud and Michael Pinckney become starters. By the time this spot on the 2016 Notre Dame football schedule rolls around, Richt should have his answer.

In the Miami secondary, Jaquan Johnson should either start or see plenty of time in competition with Rayshawn Jenkins and Jamal Carter. However, the corners are a worrisome area and lacks depth.

Corn Elder is one of those cornerbacks, though his true value is on special teams. In 2015, he returned both a punt and kickoff for a touchdown and had two other scores called back. Elsewhere, Michael Badgley brings a potent leg at placekicker and Justin Vogel offers consistency in his punting role.

Notre Dame and Miami last squared off four years ago during Notre Dame’s 2012 undefeated regular season.  Miami was Notre Dame’s Shamrock Series opponent that season with the two playing each other in Soldier Field.  The Irish wore some of their flashiest Shamrock Series uniforms while making short order of the Hurricanes in a 41-3 blowout.

Notre Dame ran for 376 yards on the day with both George Atkinson and Cierre topping 100 yards.  Atkinson, then a sophomore, had one of the plays of the game with a 55 yard touchdown run.

The only real drama four years ago came off the field.  Everett Golson, then a redshirt freshman, didn’t start the contest as punishment for showing up late for practice earlier in the week.  Tommy Rees started the game and led the Irish to a touchdown on his only drive of the game.

The win improved Notre Dame to 5-0 on the season and set up a showdown with Stanford the following week.