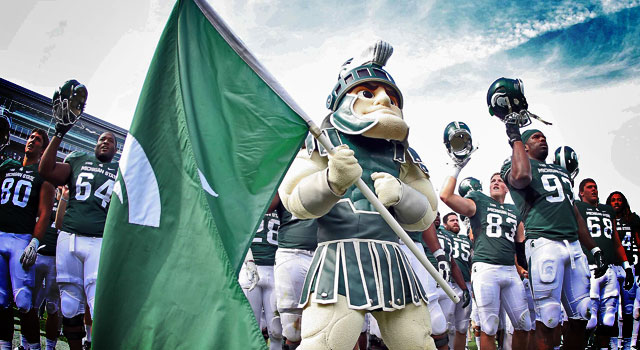 The Michigan State Sparatns come to town in September for the first time since 2013. (Photo: Mike Carter // USA TODAY Sports)

Michigan State is back on the Notre Dame schedule in 2016 for the first time since 2013.  The brief hiatus in the series after meeting 17 consecutive seasons from 1997-2013.  The Spartans that travel to Notre Dame Stadium on September 17th, however, will look a bit different than the ones Notre Dame fans have watched from a far the last couple seasons.

Last year, Michigan State won the Big Ten title and finished in the top 10 of the AP poll. Their cup runneth over. But this year, with only 9 starters returning, the cup is a little skimpy. How will the Spartans replace lost players, and how will it impact them against the Irish considering they appear so early on this year’s Notre Dame schedule?

Quarterback Connor Cook leaves the biggest pair of shoes to fill. He went 34-4 at Michigan State, and was a Big Ten monster at 23-2, and 2-0 in Big Ten championship games. The Spartans also lost receivers Aaron Burbridge and Macgarrett Kings Jr., who collected 125 of the team’s 244 receptions in 2015. Left tackle Jack Conklin and center Jack Allen, both first team All-Americans, are gone.

The defense will be without Shilique Calhoun, who had 131 career tackles, and Joel Heath, who had 31 tackles in 2015. Last year, the secondary was racked by injuries but may improve this year, something the Irish will want to note.

Coach Mark Dantonio has three quarterbacks to field in 2016, senior Tyler O’Connor, junior Damion Terry, and redshirt freshman Brian Lewerke, who will likely not start. Tyler O’Connor has some work to do. Last year, he played qb in 4 games, completed 13 of 24 passes for 133 yards, and threw 1 interception. Damion Terry played in 10 games, but briefly; he was 2 of 7 passing for 15 yards, although he did have 68 rushing yards. Notre Dame can take advantage of the Spartans’ inexperienced quarterbacks, especially since Michigan State’s offensive line lost 3 starters.

However, MSU brings some other solid talent to the mix. Senior receiver R.J. Shelton pulled in 43 receptions, gained 503 receiving yards, and grabbed 4 touchdown catches in 2015. Running back LJ Scott rushed for 699 yards and had 11 rushing touchdowns in 2015; he’s poised to break out, or was that last year? The Irish should key in on him, especially since RB coach Dave Warner wants a go-to running back. Tight end Josiah Price is predicted to lead the team in catches.

The Spartans’ defense has some good elements. Lineman Malik McDowell racked up 13 tackles for loss and 4.5 sacks last year, and experienced tackle Damon Knox will be back for a 6th season of eligibility. Sophomore defensive end Demetrius Cooper stepped up and had 5 sacks, 6.5 tackles for loss, and 22 tackles in 13 games last year. On the other hand, DT Craig Evans, DE Montez Sweat, and DL Raequan Williams are untested freshmen, something Notre Dame could take advantage of.

Michigan State’s 2015 secondary was less than intimidating, giving up 20 passing scores and 22 passing plays of 30 yards or more. Nationally, it ranked 72nd in pass defense. However, cornerback Vayante Copeland will return from injury this year, and in 2015, he had 7 tackles in his first 2 games. If he can stay healthy, he may present problems. Notre Dame will also have to keep the ball away from safeties Demetrious Cox and Montae Nicholson, who combined for six picks last season.

Will the Spartans bring the “No Fly Zone” to the Notre Dame Stadium this fall? It’s an aggressive strategy they’ve used since 2011, where the cornerbacks press up to the line of scrimmage. It’s high-risk-high-reward, since the defense can easily be burned by the long ball, and, if it’s used, is something Notre Dame may be able to capitalize on.

All in all, it’s great to see the Spartans back on the 2016 Notre Dame schedule.  MSU figures to be one of the toughest  games of the season. And hopefully, Notre Dame will send the Spartans home on their shields.

In MSU’s last visit to Notre Dame Stadium, the Irish handed the Spartans what turned out to be their only loss of the season with a 17-13 victory.  The Irish were aided by four pass interference penalties – most of which came on under thrown passes down field by Tommy Rees.  Rees, never known for his arm strength, completed just 14 of 34 passes on the day but it was enough to get the Irish in the end zone enough to pull off the victory.

Michigan State’s offense, led by a young Connor Cook, couldn’t get much going on Bob Diaco’s defense that day especially in the red zone where they scored touchdowns on just one of four attempts.

The win was Notre Dame’s third in a row over the Spartans and improved Brian Kelly’s record vs. Mark Dantonio to 3-1 during his time in South Bend.  For Dantonio meanwhile, the loss dropped him below .500 against the Irish with a 3-4 record.