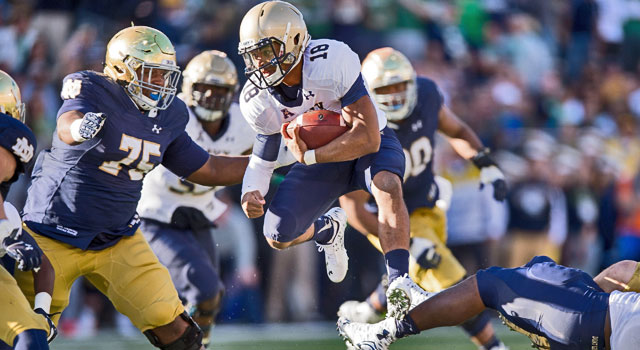 The 2016 Notre Dame football schedule gets November going with a neutral site matchup against the Naval Academy in Jacksonville. Navy is coming off a season in which they established a new record for most wins in a season with 11. However, head coach Ken Niumatalolo has to fill a gaping hole on the offense after the Academy itself almost had to replace Niumatalolo when he nearly left to become head coach at BYU.

That noticeable difference will be due to the absence of Keenan Reynolds at quarterback. The signal caller called his own number enough to run for an all-time NCAA record of 88 career touchdowns.

Replacing Reynolds will be the unenviable task of Tago Smith, who the Irish got a look at last year after Reynolds went out with an injury. That snippet was hardly a strong gauge on his talent, though he did gain 47 yards on just nine carries.

One other weapon in the backfield will be Dishan Romine, who only gained 378 yards but gained an average of more than 10 yards on each carry. Another is Shawn White, whose 250-pound frame is a big body that Irish defenders will have to bring down.

Though the Navy offense is powered by the run, the Middies have a receiving weapon that Notre Dame needs to watch. That player is wide receiver Jamir Tillman who combines to hold onto the ball with precise route-running skills.

Besides quarterback, the offensive line also took a lethal hit with all five starters needing to be replaced. Tackle Robert Lindsey and guard Adam West have limited experience as starters, but this may be a group that the Irish defensive line can dominate.

Navy: Rebuilding is the Name of the Game

In addition to the absence of Reynolds, Navy has to figure out how to fill eight other spots on the offensive side of the ball. The defensive unit isn’t quite as depleted but still must replace four players.

Navy Defense: In Need of a Good Front

Brian Kelly’s squads have never had much trouble putting points on the scoreboard when it comes to this spot on the Notre Dame football schedule. In all likelihood, that offensive onslaught is likely to continue given the graduation losses sustained by the Middies.

Still, Navy was opportunistic last season, leading all NCAA teams with 15 fumble recoveries. With two key links gone up front, Amos Mason at one end has to make things happen and also needs other players like Patrick Forrestal to step up and use his bulk to help him.

The linebackers will be paced by Micah Thomas and Daniel Gonzales on the inside, who combined for 138 tackles in 2015. While overall depth in this area may be a question, Notre Dame is faced with an all-veteran group of starting linebackers. D.J. Palmore and Josiah Powell return on the outside for Navy.

Finally, the secondary will have Daiquan Thomasson back on patrol at free safety after 41 tackles and two interceptions. Meanwhile, Brendon Clements looks to improve on his team-high four picks from last year.

Given the lineup losses, Niumatalolo is looking to make special teams excellence a key component of the 2016 Middies. To that end, he plans to continue using Romine as his kick return man. In addition, D.J. Grant-Johnson has a potent leg that might add some additional points during this game on the Notre Dame football schedule in 2016, while punter Alex Barta returns after a strong first season.

In Notre Dame’s yearly showdown with the Midshipmen in 2015 it looked like the Irish were in for a dog fight at half time.  Coming off the heels of their first loss of the season the week before at Clemson, Notre Dame and Navy were tied right before the half before Justin Yoon boomed a 52 yard field goal as time expired to give the Irish the lead.

The Notre Dame defense forced three turnovers and held Keenan Reynolds out of the end-zone and temporarily knocked him out of the game in the 2nd quarter.  Reynolds would return, but couldn’t get the Navy offense going again as they converted just two of 11 third downs.