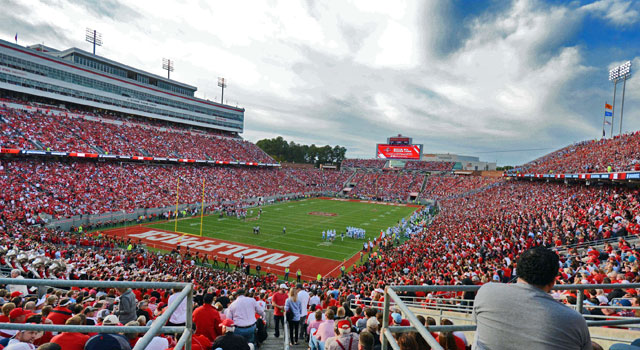 Notre Damel will make its first ever trip to Carter Finley Stadium to face off with NC State in week six in 2016. (Photo: Rob Kinnan // USA TODAY Sports)

The sixth week of the 2016 Notre Dame football schedule has the Irish traveling to Carter-Finley Stadium in Raleigh to face the North Carolina State Wolfpack. Led by fourth-year coach Dave Doeren, the Wolfpack are coming off a 7-6 season that ended with a defensive shredding in the 51-28 loss to Mississippi State in the Belk Bowl.

The likely starter behind center is Boise State graduate transfer Ryan Finley. While Finley may get competition from Jalan McLendon or Jakobi Meyers, he does have a connection with the team’s new offensive coordinator, Eli Drinkwitz, who also arrives from Boise State.

Assuming running back Matt Dayes is fully recovered from a season-ending injury, he’ll be the main focus of the Irish run defense. However, one fellow backfield member to keep an eye on is redshirt freshman Johnny Frasier, given that he joined the Wolfpack as a highly-touted prospect who Drinkwitz might deploy at some point.

The eventual starting quarterback will keep the Notre Dame defense on their toes. That’s because of throwing options like tight end Jaylen Samuels, who led N.C. State with 65 catches and seven touchdowns, though he isn’t known for getting deep. Meanwhile, the wide duo of Jumichael Ramos and Bra’Lon Cherry will be key targets after combining for 59 receptions last season.

Changes at quarterback and offensive line and the speed of adapting by October 8 will help gauge what offensive threats N.C. State might offer. On the defensive side, the Wolfpack are expected to have eight returning starters back, though their performance in big games has been suspect.

North Carolina State Defense: Drawing the Line on the D-Line

While there’s definitely talent amid the Wolfpack defense, the need to clamp down against quality opponents is something that has to happen in 2016. Last season, the bowl game loss and Clemson loss showed that there’s still plenty of work necessary.

Still, the North Carolina State defensive line should be the most impressive fact on this side of the ball. Five different players saw starting duty, with three of them: Bradley Chubb, Darian Roseboro and B.J. Hill combining for 13 sacks.

In the Wolfpack’s unique 4-2-5 defensive setup, linebacker Airius Moore lst year led the team in tackles. Then, he found a way to collect eight tackles-for-loss, so he’ll be a player the Notre Dame offensive coaches have to take into account.

The veterans in the secondary have the ability to deliver results. However, they’re going to need the burgeoning potential up front to come through. Otherwise, this date on the 2016 Notre Dame football schedule will end up as a “W” for the Irish.

North Carolina State Special Teams: A Threat to Zero In on

The key player here is sophomore Nyheim Hines, who may also see action at running back or wideout. However, his return capabilities make him a dangerous threat for Notre Dame special teams.

In the area of kicking, punter A.J. Cole showed a knack for being able to pin opposing offenses deep in their own territory. In contrast, kicker Kyle Bambard’s limited range made virtually kicks of 40 yards or more impossible.

Notre Dame and NC State have only ever faced each other once and never in the regular season.  That lone meeting came following Tyrone Willingham’s first season in South Bend in 2003 Gator Bowl.   Notre Dame limped into the Gator Bowl on the heels of a drubbing at the hands of USC and that New Year’s Day contest proved to be not much more friendly to the Irish.  NC State held Notre Dame out of the end zone and sent the Irish home with a 28-3 loss.

The story of the game, however, was the loss of starting quarterback Carlyle Holiday by Notre Dame.  Holiday separated his shoulder on the second drive of the game after leading the Irish to the Wolfpack 1 yard line.  Just as when Holiday was knocked out of the Boston College game during the regular season, the Notre Dame offense completely stalled without him.

Former walkon Pat Dillingham was put in charge of the Irish offense but couldn’t led them to any points while throwing three interceptions.

The loss gave Notre Dame back to back losses and three losses over their final five games after starting the season 8-0 during Willingham’s first year on the job.  As we all know, things didn’t get much better from there for Notre Dame under Willingham.