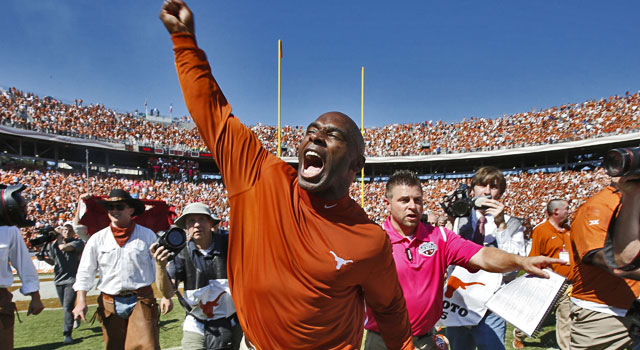 Today we kick-off our breakdown of Notre Dame’s 2016 football schedule.  Once again the Irish face a daunting slate of games that, will prove challenging to navigate unblemished.  Will this year’s slate of games, however, stand up against the other college football elite should the Irish drop a single game?

We’ll examine that topic later this summer.  For today, we’re focusing on Notre Dame’s season opener against Texas. When the Irish travel to Austin for the first time since 1996 for a Labor Day weekend Sunday night prime-time showcase.

Notre Dame opened the season with Texas last year and made short order of the Longhorns in South Bend.  How much have the Longhorns changed in a year?  Let’s find out.

The Longhorns under Charlie Strong have had 2 rough seasons. In 2014, they finished 6-7 and went to the Texas Bowl. But 2015 started with a 38-3 loss to Notre Dame and finished with a 5-7 record and no bowl game.

This year, Texas opens at home against Notre Dame. Being first on the 2016 Notre Dame football schedule again could be intimidating; however, the Longhorns have done some recruiting and beefed up both offense and defense. Here’s what they have to bring to the table this year against to give the Irish a tougher match up.

What’s New With The Offense

New offensive coordinator Sterlin Gilbert comes with some street creds. He coached Jimmy Garoppolo at Eastern Illinois where the Panthers led the nation in yards and points per game in 2013. In 2014, Gilbert coached Bowling Green to the MAC championship final. Gilbert plans to improve the passing game and speed up the tempo of the Texas offense and thinks he has the players to do it.

The new oc does have some talent at quarterback. Junior qb Tyrone Swoopes completed 2,409 yards and scored 13 touchdowns in 2014. However, platooning with Jarrod Heard in 2015, his numbers went down. Sophomore Heard is both a passing and rushing threat, throwing 1214 yards and rushing for 560 yards in 2015.

Also promising is freshman quarterback Shane Buechele. About Buechele, coach Charlie Strong said, “Yes. Oh yes. Oh, he will play in the fall, yes.” The Longhorns’ new faster tempo offense is familiar to Buechele, who learned it at Arlington Lamar High. And the freshman threw for 299 yards and 2 touchdowns in the spring game.

The Horns’ most exciting acquisition on offense might be Devin Duvernay, who had considered Baylor but committed to Texas. He was ranked the #4 player from Texas, #4 wide receiver overall, and #36 player overall. He can run a 4.38 40-yard dash, and, as well as catch the ball, the elusive freshman can return punts and kicks.

Add outside receivers John Burt and Collin Johnson and running backs D’Onta Foreman and Chris Warren III, and a quick, spread-out offense could be effective for Texas this year.

From last year, there’s linebacker Malik Jefferson, a freshman All-American in 2015 who had 61 tackles, 37 of them unassisted. He also posted 2-1/2 sacks. Along with Malik, sophomore ends Charles Omenihu and Breckyn Hager could contribute to the pass rush. Omenihu had 15 solo and 2 assisted tackles, and Hager had 12 and 5; and now they have a year’s experience.

The secondary has some talent, including cornerback Holton Hill, who had 49 tackles, a fumble recovery and a pick-6. Cornerback Davante Davis had 36 tackles and one interception and was also proficient at pass breakups. He’ll definitely be in the mix as well.

How About Special Teams?

Unfortunately, Texas still needs a kicker, since three walk-ons couldn’t cut the mustard. But things may look up if Devin Duvernay can be an effective punt returner.

The Longhorns will have to put a lot of faith in untried players. But most of the pieces are there. If Charlie Strong and the team can put them together, being on the 2016 Notre Dame football schedule might not be so bad.

Notre Dame’s 38-3 shellacking of Texas will be on the minds of the Longhorns all summer long and Notre Dame fans can count on Texas having this game circled on their schedule all summer long.  Notre Dame controlled every aspect of the game behind a nearly flawless performance from Malik Zaire.  Making just his second career start, Zaire completed 19 of 22 passes for 313 yards and three touchdowns including a 66 yard bomb to Will Fuller.

Notre Dame racked up 527 yards of offense to just 163 for Texas while amassing an absurd 30 first downs and nearly 40 minutes of time of possession.  It wasn’t all sunshine and rainbows for the Irish though.  Notre Dame lost starting running back Tarean Folston for the season on just his third carry of the season.  It was a sign of things to come.

The issue was never in doubt and the Irish improved to 9-2 all-time versus the Longhorns.  For more on the entire history of the history of this series check our post on the Notre Dame – Texas series from last summer.