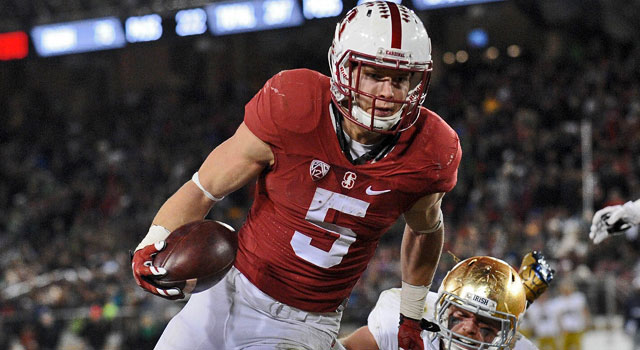 The third and currently final scheduled night game on the Notre Dame football schedule for 2016 will have the Irish hosting long-time rival the Stanford Cardinal on October 15. While Stanford is coming off a Rose Bowl win and remains dangerous under head coach David Shaw, they may be hard-pressed to stay with Brian Kelly’s squad.

Stanford Offense: Relying on the Workhorse

The main reason is that the Cardinal signal caller who wins the preseason competition, will enter the year with virtually no experience at the collegiate level. Regardless of whether the choice turns out to be Keller Chryst or Ryan Burns, this could be a problem area against Notre Dame.

The Irish will maintain a laser-like focus on junior running back Christian McCaffrey. Coming off a year in which he was a Heisman finalist and established a new benchmark for NCAA all-purpose yards, McCaffrey is the Cardinal’s most dangerous commodity.

Bryce Love will likely be Stanford’s other running option in the brief moments that McCaffrey is resting. Love has speed to burn but hasn’t seen much time on the field.

Michael Rector will be the main weapon at wide receiver for the Cardinal after 34 catches in 2015, including seven touchdowns. Elsewhere, tight end Dalton Schultz needs to upgrade his production after snagging a mere 10 passes last year.

The Stanford offensive line is undergoing some reconstruction due to the departure of three starters. Still, the Cardinal has a tradition of developing quality lineman, an area and can make great strides in this spot on the Notre Dame football schedule.

On offense, Stanford lost six starters, but still has its biggest asset in McCaffrey. Meanwhile, the Cardinal defense has to fill five starting spots, the most important being at linebacker.

Entering the 2016 season, Solomon Thomas is the only standout on the Stanford defensive line. He’ll have Harrison Phillips, back from a torn ACL, to join him but there are question marks elsewhere. Wishing and hoping that returning talent emerges or new arrivals jump into the mix might be the best-case scenario.

Among the linebacking corps, finding an effective replacement inside for All-Conference Blake Martinez is the key. The duo of Bobby Okereke and and Kevin Palma should man those slots, while Peter Kalambayi and Joey Alfieri are the best bets on the outside.

A veteran secondary has some youth included, which could lead Brian Kelly to focus on more of a running gameplan. The two players to watch here are Alijah Holder at cornerback and Dallas Lloyd at safety, with Lloyd the team’s leading returning tackler.

Others who may help out include Zach Hoffpauir, who sat out last season to play minor league baseball, and the still-developing trio of Alameen Murphy, Ben Edwards and Justin Reid.

One problem for Stanford as it relates to the Notre Dame football schedule is that they need to increase the number of turnovers forced after a miserably low total of 14 last year.

Stanford Special Teams: Among the Best

One of McCaffrey’s many attributes is outstanding work on special teams. He was the team’s leading kickoff and punt returner, but it might serve the Cardinal well to hand off some of that work on other players.

Notre Dame fans know Conrad Ukropina very well after his 45-yard field goal dealt the Irish a 38-36 loss last year. He made all 67 extra points and connected on 90 percent of his field goals. The team’s punting will be handled by Jake Bailey.

A year ago Notre Dame entered its regular season finale against rival Stanford with a 10-1 record and playoff aspirations.  The Irish would have needed a win and some help to secure a birth in the CFP but in the end couldn’t hold up their end of the bargain falling 38-36 on a last second field goal.

Notre Dame used a barrage of big plays in a back and forth contest that looked like it would go Notre Dame’s way with a last minute touchdown.  The Irish defense which did a good job containing Heisman finalist Christian McCaffery couldn’t contain Kevin Hogan by allowing the Cardinal to move into field goal range after Deshone Kizer scored a go ahead touchdown with just 0:30 left on the clock.

Conrad Ukropina split the uprights on a 45 yard attempt as timed expired to send Notre Dame home one victory short of being in the playoff conversation through the end.

CJ Sanders returned a kick-off 93 yards for a touchdown, Josh Adams had a 62 yard touchdown run, and Will Fuller hauled in a 73 yard bomb from Kizer.  The Irish had trouble scoring from close distance, however, while settling for three Justin Yoon field goals all under 30 yards.  Red-zone problems – a year long issue for Notre Dame – cost the Irish dearly against Stanford.