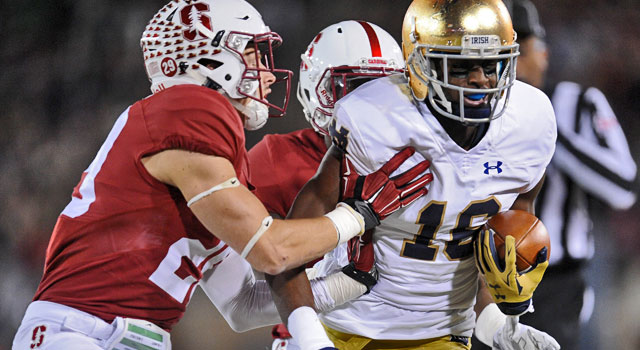 Last week Notre Dame’s September foes were previewed, resulting in big wins over Texas, Michigan State and Duke, and an uncomfortably tight match with Nevada.  The Irish head into October undefeated for the third year in a row under head coach Brian Kelly with stiff challenges from the likes of Stanford and Miami.  Can Notre Dame exist October with an undefeated record still intact?

Syracuse is putting its dreadful 4-8 season from last year behind them and saying hello to new head coach Dino Babers and his fast-paced offensive attack.  Babers has a history of revitalizing programs, notching a 19-7 record at Eastern Illinois before moving on to Bowling Green where he won a MAC championship in only his second season.  Babers is looking for the program rebuilding hat trick with the Orange.

The good news for Babers is he has a quarterback capable of orchestrating his up-tempo attack in sophomore Eric Dungey, who is poised for a breakout season.  Offensively, the positive news stops there.  It will take time for Babers to recruit the pieces he needs to effectively run his offense, as he inherits a slow-paced unit that finished No. 118 nationally in yards per game and will be forced to replace three starters along the offensive line.

The defensive side of the ball is facing similar transition under new defensive coordinator Brian Ward who utilizes a bend-but-don’t-break approach.  The Orange’s defense should take a step forward given its experience at linebacker and in the secondary, but its status as the No. 98 defensive unit in the nation last year underscores how much of a project Dino Babers is inheriting.

Babers has the pedigree and track record to turn around a Syracuse program that has been ailing since the Donovan McNabb era in the 1990s, but it will take far longer than one season.  Notre Dame continues its tendency to play to its opponent’s talent level and comes out flat but the Orange lack the necessary firepower to take advantage.

N.C. State head coach Dave Doeren made a name for himself at Northern Illinois by posting an impressive 23-4 record in two seasons before accepting the Wolfpack’s position in 2013.  Doeren has taken N.C. State from a 3-9 program to back-to-back bowl appearances and is looking to make the jump to an ACC contender.

The Wolfpack had an explosive offense at times last season with the No. 30 rushing attack in the nation and would have climbed even higher had running back Matt Dayes not been forced to miss five games due to injury.  Despite N.C. State’s rushing ability there are questions as to whether their offense will regress in 2016.  The Wolfpack lost star quarterback Jacoby Brissett and will replace him with sophomore Jalon McClendon who only has several career passing attempts, and three key pieces along the offensive line have exhausted their eligibility.

Defensively, N.C. State is unlike the rest of Notre Dame’s 2016 opponents to date in that its defense will not be battling through significant transition due to talent loss.  The strength of the Wolfpack defense is along the defensive line and is led by the same group that carried N.C. State to a No. 29 ranking in total defense.

If Notre Dame suffers an unexpected loss this season it will happen in Raleigh, North Carolina.  The Wolfpack have a history of bringing down superior teams at home, so much so the Florida State media has dubbed Carter Finley Stadium a “house of horrors”.  With the possibility of an undefeated showdown against Stanford looming the following week, this game screams “trap game” to an uncomfortable degree.

N.C. State has the defense to frustrate and disrupt Notre Dame’s offense – something ND will have yet to encounter during the 2016 season – yet there are two reasons I am taking Notre Dame to win this game: an inexperienced quarterback in McClendon and the fact the strength of N.C. State, their ability to run the ball, plays into the strength of Notre Dame’s defense, which is stopping the run.  If Jacoby Brissett still donned a red and white helmet I would take N.C. State with the upset.

I’m picking Notre Dame to win this game but there’s an ominous feeling I cannot seem to shake about the Irish’s trip to Raleigh.

Regardless of what the records may be for Stanford and Notre Dame when they square off on October 15th, ESPN’s College GameDay should make sure its calendar is clear.  In the past four seasons the annual rivalry game has been an instant classic with each being decided by 7 points or less and coming down to the final play.  Another tidbit that may be of interest to Notre Dame fans is the fact the home team has been the victor in this matchup four years in a row.

Heisman finalist Christian McCaffrey returns to lead a rushing offense that was No. 19 in the nation as the one-time Notre Dame recruit rushed for over 2,000 yards and 8 touchdowns in 2015.  The future of the Stanford offense, however, gets a bit murkier from there.  Four year starting quarterback Kevin Hogan is gone, leaving senior Ryan Burns and his one career passing attempt to compete with junior Keller Chryst and his nine passing attempts to fill the void.  The eventual starter will also lose key weapons in wide receiver Devon Cajuste and tight end Austin Hooper.  But the biggest issue for the Cardinal offense is along the offensive line where head coach David Shaw will have to replace three starters.

Defensively Stanford returns Chuck Bednarik Award watch list candidate Solomon Thomas along the defensive line but will have to replace defensive end Brennan Scarlett and impact defensive tackle Aziz Shittu.  Overall, the Cardinal had a relatively strong defense in 2015 with a No. 43 ranking and Stanford should have another stout unit in 2016.

If last year’s contest in Palo Alto doesn’t still haunt you, you should reassess your Notre Dame fandom.  Stanford’s offense was built around the run and Notre Dame completely shut it down, limiting McCaffrey to less than 100 yards rushing and less than four yards per carry.  Likewise, Notre Dame’s offense bullied the Cardinal defense, posting two 100 yard rushers and dropping 36 points on one of the better scoring defenses in the country.  What cost Notre Dame against Stanford were repeated blown assignments in the secondary.

If Notre Dame’s defense can bottle up McCaffrey again – something it should be able to do, particularly with the return of run-stuffing safety Drue Tranquill, who was a one-man wrecking crew against Georgia Tech last fall, back from injury – the Irish should exact revenge on a Stanford team that overall was outplayed by Notre Dame last fall.

The Al Golden era ended in the middle of last season when the Hurricanes, a 7-point underdog heading into a matchup against Clemson, fell behind 45-0 before the Tigers began to pull their starters, leading to the worst loss in program history.  Enter new head coach, Mark Richt.  Richt, a former Miami quarterback, spent 15 years as Georgia’s head coach, and during that time recorded only one losing season while amassing a career winning percentage of .740 (145-51).  Richt will lead the Hurricanes into South Bend for the first time since 1990 when No. 6 Notre Dame upset No. 2 Miami 29-20.

Offensively, junior quarterback Brad Kaaya will be the best quarterback Notre Dame will have faced to date, throwing for over 3,000 yards and posting a 16-5 touchdown to interception ratio last season.  The challenge for Richt will be everywhere else.  The Hurricanes lost significant talent at wide receiver, and although running back Joseph Yearby returns after a 1,000+ rushing season, the offensive line needs significant improvement despite returning all five starters.  Miami had one of the worst rushing attacks in the nation, finishing 117th nationally.

The Hurricanes return a significant amount of talent on the defensive side of the ball, a much needed development for a unit that could stand to see significant improvement.  Outside of a secondary that finished No. 38 nationally in passing efficiency the defense struggled, surrendering an average of 200 yards per game on the ground and finishing 70th in points allowed.

The Hurricanes will be the first team Notre Dame will have encountered during the 2016 season with a strong passing attack, which poses problems for an Irish defense that specializes in stopping the run.  Notre Dame’s defense finished 75th in sacks in 2015 – a stat that may actually get worse this fall – and No. 57 in pass efficiency.  If Kaaya is given time to throw Notre Dame could find itself in trouble, particularly if Miami’s defense shows sign of improvement under Richt.

Two critical factors give Notre Dame the edge, starting with Notre Dame’s ability to run the football against a Miami defense that was one of the worst in the nation in rushing defense.  Look for Brian Kelly to play time of possession against the Hurricanes to limit Kaaya’s opportunities.  And secondly, Notre Dame will have an extra week to prepare and rest its players heading into the Miami game, which will provide a big advantage.

Richt will turn the Hurricanes around but it will take more than one season.

Notre Dame leaves October with an 8-0 record for only the second time in the Brian Kelly era.  Can the Irish keep the momentum going into November?  Find out next week when games against Navy, Army, Virginia Tech and USC are previewed.