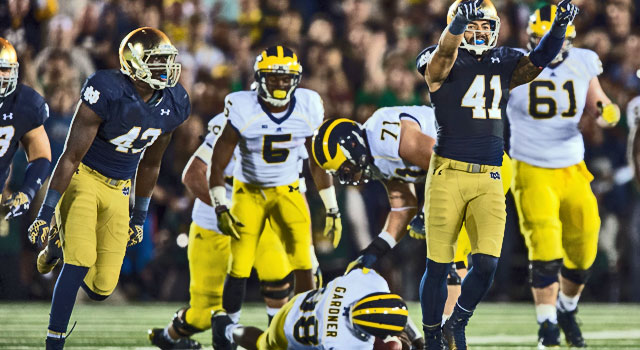 Earlier today reports leaked that Notre Dame and Michigan would resume their rivalry in 2018 after its ending in 2014.  This afternoon both schools made it official by announcing a home and home in 2018 and 2019.  Michigan will return to Notre Dame September 1, 2018 for the first time since being shut out by the Irish 31-0 in 2014.  Notre Dame will travel to Ann Arbor on October 26, 2019 for the first time since 2013.

When news first broke of the rivalry renewal, we assumed that a Shamrock Series game would be the most logical meeting given Notre Dame’s previous home and home commitments.  Notre Dame, however, was not scared to add Michigan to a slate that already includes USC, Stanford, and Florida State in 2018 and Georgia and Stanford in 2019.

According to today’s press release, this has been in the works for a long time.

“Today is a great day for Notre Dame, Michigan and college football fans across the country,” says Notre Dame vice president and James E. Rohr Director of Athletics Jack Swarbrick. “Shortly after Warde Manuel was hired as Michigan’s athletic director, he and I began working to make this renewal of the series possible. That we could get games on the schedule as soon as ’18 and ’19 required a lot of work by our staffs and some great cooperation by the Big Ten, ACC and other schools that were on our future schedules.

While additional games between the two, an annual series is not imminent nor is it likely.

“While the schedule commitments of both Notre Dame and Michigan make an annual series impractical, we’re optimistic that additional games can be scheduled in the future.”

We wanted to make this game happen.

Since it's the season opener at Notre Dame, @CoachJim4UM may need to break out the khaki shorts.

We’ll have plenty more on this announcement later tonight including how it impacts the 2018 and 2019 Notre Dame schedules.  But for now, we’ll leave you all with this: