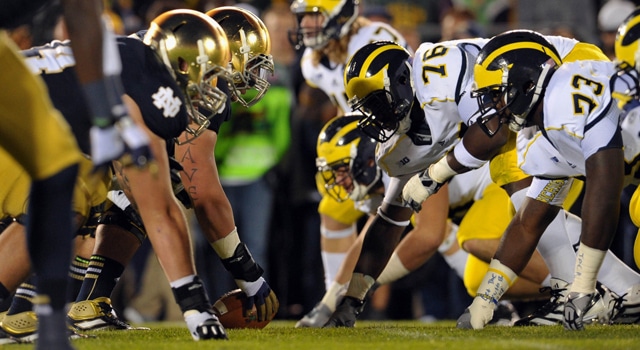 The Notre Dame Fighting Irish and the Michigan Wolverines line up at the line of scrimmage in the third quarter at Notre Dame Stadium. Notre Dame won 13-6. Mandatory Credit: Matt Cashore-USA TODAY Sports

No other details have been released at this time and it’s not clear if their will be an ongoing or if this could be a one-time game for now.  Given some of the high profile opponents Notre Dame has coming in upcoming years, a long term continuation of the rivalry seems unlikely – at least starting in 2018.

What could be more likely, at least in the short term, is a one-time game between the two potentially in the Shamrock Series as has been rumored over the last few months.  Jack Swarbrick has said in the past that the future of the Shamrock Series will be characterized more by the opponent than the venue.  Adding Michigan in a Shamrock Series game when the series resumes in 2018 would certainly fit that bill.

All of that, however, is speculation at this point.

Notre Dame has two open games left on its 2018 schedule at this point but already does have Florida State and USC scheduled already.  Adding Michigan would give Notre Dame one of the nation’s toughest schedules without question.

Notre Dame and Michigan have met 42 times overall with the most recent being Notre Dame’s shutout of the Wolverines two years ago in the final year of the Brady Hoke era in Michigan.  Everett Golson led Notre Dame to a 31-0 shut out of the Wolverines that was kept closer than it should have been when Elijah Shumate’s interception return for a touchdown in the final seconds was called back for an unnecessary roughness penalty on the return.

More details once they become available, but for now it at least sounds like we won’t have to wait much longer to see Michigan back on Notre Dame’s schedule.