Did Notre Dame Schedule Itself Into a Problem in ’18/19? 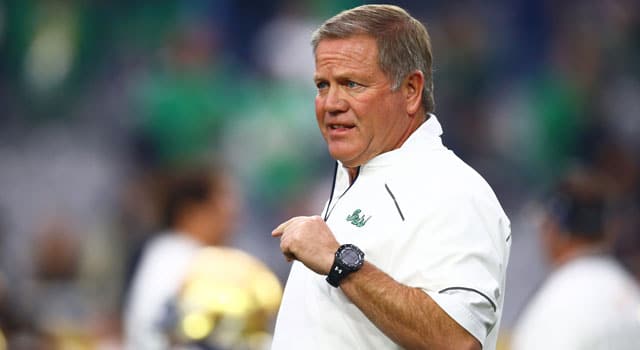 The addition of Michigan to the '18 and '19 schedules has created a difficult schedule for Brian Kelly and Notre Dame to navigate. (Photo: Mark J. Rebilas-USA TODAY Sports)

Both Notre Dame and Michigan fans received the news of the two schools resuming their rivalry in 2018 and 19 positively last week.  Upon further review though, did Notre Dame schedule itself into a playoff problem in both seasons by adding yet another marquee, potential top 10 opponent?

The Notre Dame football schedule is always a hot topic.  Detractors point to Notre Dame playing service academies – specifically Navy every season – and discount the absence of D1AA foes on any Irish schedule.  Notre Dame fans argue the Irish schedule is among the toughest in the country year in and year out.  It will be hard for anyone to argue that in both 2018 and 2019 with Michigan now on tap for Notre Dame.

In 2018, Notre Dame has to take on Florida State, Stanford, USC, and Michigan.  In 2019, Notre Dame’s schedule features Georgia, Michigan, Stanford, and USC among other tough contests like a road game in Blacksburg, Virginia against Virginia Tech.  In any given season that could be four top 10 teams in both 2018 and 2019.  Even SEC fans can’t argue with that type of strength of schedule.

Let’s take a closer look at both years and how these games fall.

On the positive, Notre Dame is not currently scheduled to leave Indiana in September, but then finishes the season on the road in five of the last seven weeks.  That stretch includes trips to Los Angeles and Blacksburg.  Notre Dame’s marquee games are also fairly well spaced out.  The season opener against Michigan isn’t followed with another tough opponent for four weeks when Stanford visits South Bend.  The Irish then get six weeks in between Stanford and Florida State, but only have one opponent sandwiched in between the Seminoles and Trojans.

On the surface, that’s four potential top 10 teams on the 2018 schedule.  Jim Harbuagh has Michigan trending up and let’s be honest, it would be a shock given Harbaugh’s track record if the Wolverines weren’t a top 10 team by then.  Jimbo Fisher has Florida State as a top 10  team most years.  David Shaw has the same with Stanford.  USC is the one wildcard with a new head coach, Clay Helton, without a track record.

That gauntlet looks somewhat similar to the 2012 schedule that swapped Florida State for Oklahoma while featuring the Michigan, Stanford, USC trio.  That year’s schedule turned out to be lighter than originally projected and the Irish navigated it to a 12-0 record.  It will be surprising if 2018’s turns out to be similarly lighter than expected.

Throw in wild card programs like Northwestern, Virginia Tech, and Pitt and that schedule could be a playoff resume killer.

By comparison, Michigan’s top four opponents in 2018 are Notre Dame, Ohio State, Michigan State, and Penn State.  The top three compare favorably with Notre Dame’s, but Penn State as a fourth toughest game is a little more palatable than say USC or Florida State. Michigan does, however, have to travel to South Bend, East Lansing, and Columbus all in the same season though.

Before the end of September, Notre Dame has road trips at Louisville and at Georgia.  Notre Dame will get USC at home in October, but then they end the month with back to back road trips to Georgia Tech and Michigan.  All of that before ending the season in Palo Alto against Stanford.

Another season, another four potential top 10 opponents – USC, Georgia, Michigan, and Stanford.  Then there’s Georgia Tech.  Paul Johnson had the Yellow Jackets looking like a program on the rise before falling off in 2015.  Virginia Tech and Virginia are wild cards as well.

Building a challenging schedule that allows Notre Dame to both build a playoff resume while also working in tune ups and rest weeks will be difficult for Jack Swarbrick given the lack of a championship game for Notre Dame.  What he’s done by adding Michigan to the schedules in 2018 and 2019 is pretty much assure that an 11-1 Notre Dame team in either year will be firmly in the playoff mix.

The potential problem, however, is that both schedules are going to be extremely difficult for Notre Dame to navigate either undefeated or with just a single loss.  Both schedules are loaded with potential elite teams and wild cards that could create some unexpected land mines along the way.

Schedules do have a way of changing for the better and the worst by the time the games happen.  We saw in 2012 a schedule that looked daunting turned out to be manageable for a team with a redshirt freshman quarterback.  Neither the 2018 or 2019 schedule, however, has many tune up opportunities.

Notre Dame doesn’t play D1AA teams like the majority of programs around the country so games like Duke, Virginia Tech, Virginia, or Georgia Tech can turn out to add additional marquee games.   Just look back to 2015.  Who would have thought Temple and Navy would have been some of Notre Dame’s highest ranked opponents?

There is a lot of time between now and 2018 and 2019, but with only a few spots open on both schedules; it is clear that Notre Dame will not be facing any shortage of opportunities to impress the Playoff Committee.  An 11-1 record in either year and it’s almost impossible to imagine a scenario where the Irish would be left out of the playoffs baring four undefeated, conference championship winning teams.

The real question now though is whether or not the Irish can make it through the gauntlet of games it has in front of them in both seasons either undefeated or with a single loss.  Only time will tell.  Thankfully it looks like Brian Kelly and his staff are headed towards a top 5-10 recruiting class in 2017 and have the foundation for a monster class in 2018.