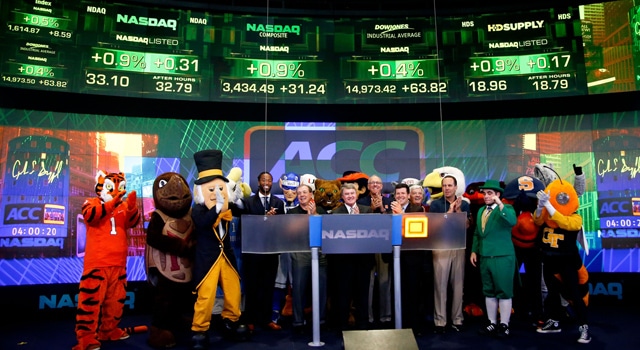 If the adage that there is no such thing as negative publicity stands true, Notre Dame and athletic director Jack Swarbrick have crafted a masterpiece.  One full calendar year before the Fighting Irish begin their new affiliation with the Atlantic Coast Conference (ACC) that will see ND annually play five ACC members – and each ACC member at least once every three years – the resulting snide remarks and debate have captured attention.  Duke head basketball coach Mike Krzyzewski made news for throwing his two cents into the ND-ACC agreement, stating he would never have allowed Notre Dame to join without full membership.  The Charlotte Observer summed up the unorthodox arrangement best.

“[The agreement] [is] unusual.  It [is] contrary to decades of ACC tradition.  It [is] a massive coup for the conference.”

While opinions or approval of the deal may vary, its mutual benefits are unquestionable.  Notre Dame is now capable of cementing its feet to the ground against the contemporary whirlwind of conference realignment and expansion, finding a permanent home for its Olympic sports and solidifying bowl tie-ins.  The ACC has gained conference stability and brand recognition the likes of which it is only now beginning to comprehend.  As Luke DeCock writes in The Charlotte Observer, the ACC has enjoyed larger bargaining chips, with the ACC landing a Gator Bowl tie-in.  It was also able to upgrade its Belk Bowl tie-in, with an SEC opponent now filling the second slot.  In addition, every bowl-tie in the ACC has announced is against a BCS conference member.

With skepticism and early benefits as a prelude to Notre Dame’s ACC venture, what will Notre Dame face in its 2014 opponents?  Some will offer chances at redemption, while others will be a new beginning.

Notre Dame’s last encounter with Syracuse in 2008 ended in embarrassment.  Head coach Greg Robinson had been given notice he would be released at season’s end, and the Orange descended upon South Bend with a freshly fired coach.  Such surrounding circumstances made the Charlie Weis-led Irish’s 24-23 defeat all the harder to swallow.

What can Notre Dame expect in 2014 when meeting Syracuse at MetLife Stadium in New Jersey?   The Orange bounced back after Robinson’s dismissal courtesy of head coach Doug Marrone, who posted two 8-5 seasons as well as strung together two Pinstripe Bowl victories before bolting to the NFL ranks.  Will new head coach and former Orange defensive coordinator, Scott Shafer, be able to keep Marrone’s upward trajectory amidst an ACC schedule?  It will be worth tracking in 2013.

Rather surprisingly, despite Notre Dame’s 126 years of football, the Fighting Irish and Louisville Cardinals have never suited up against one another.  That will all change in 2014 when Notre Dame plays host to the Bluegrass program.

Louisville is led by one of the up-and-coming coaches in college football, Charlie Strong.  In his three years as Cardinals coach, Strong has amassed a 25-14 record, posting back-to-back 7-6 seasons before flying onto the national scene in 2012.  Last season Louisville boasted an 11-2 performance, stunning #4 Florida 33-23 in the Sugar Bowl.

Though emerging as a national player, Louisville will be a very different program when the Cardinals square off against Notre Dame in 2014.  The Cardinals’ quarterback and Heisman candidate, Teddy Bridgewater, will begin his junior year in 2013, and the fact he recently acquired a $10 million insurance policy strongly indicates this season will be his last at the collegiate level.

Can Louisville escape the stigma that they’ve only had success in the allegedly inferior Big East?  Will they be able to replicate last year’s production in the ACC this upcoming season?  Is Charlie Strong an elite coach, or is he simply riding to heights on the arm of his star quarterback?  All these questions will be worth keeping in mind in 2013.

Much like Syracuse, Notre Dame’s last outing against North Carolina occurred in 2008 with disappointment.  Charlie Weis’ Irish team held the lead heading into the 4th quarter at Chapel Hill but was unable to hang on, losing to Butch Jones’ squad, 29-24.

The 2014 match will take place in South Bend, and North Carolina will be coached by Larry Fedora.  Fedora managed an impressive 34-19 record in four years at Southern Mississippi before accepting the UNC job after Butch Jones’ dismissal.

Fedora led the Tarheels to a successful season in his first year, posting an 8-4 record and winning the ACC’s Coastal Division.  Due to NCAA sanctions stemming from Butch Jones’ tenure, however, the Tarheels were unable to participate in the ACC Conference Championship.

Given Fedora’s previous success and the Tarheels’ admirable 2012 campaign, North Carolina could very likely be a tough matchup in 2014.

Wake Forest and Notre Dame had never met prior to 2011, though with the new ACC affiliation the programs will soon become much more acquainted.  In 2011 the Irish travelled to Winston-Salem and endured a close contest before emerging victorious.  Last season the Demon Deacons returned the trip and arrived in South Bend as ND’s Senior Day opponent, getting blasted out of the stadium by Manti Te’o and his senior counterparts, 38-0.

Jim Grobe is entering his 13th season as Wake Forest’s head coach, amassing a 73-74 record.  Grobe has experienced isolated success in Winston-Salem, reaching as high as an 11-3 season and an ACC Conference title in 2006.  However, the Demon Deacons have stumbled in recent years, posting four losing seasons in a row.

Unless something dramatic occurs, anything less than a victory when Wake Forest travels to Notre Dame in 2014 would truly be an upset.

The list of “IOU’s” directed toward Florida State is extensive and painful for Notre Dame, beginning with the national title that never was in 1993.  Most recently, Notre Dame held a 14-3 lead against FSU in the 4th quarter of the Champs Sports Bowl before the Seminoles hung 15 unanswered points on the Irish for the victory.

Jimbo Fisher is the head coach of Florida State, taking the reins from legendary coach Bobby Bowden in 2010.  Since beginning his tenure Fisher’s managed a 31-10 overall record and an ACC Championship in 2012, though media criticism has always been within arm’s reach after losing to an N.C. State squad, 17-16, that finished 7-6 for the season.

Florida State is one of the premier programs in college football and is unquestionably the toughest ACC foe Notre Dame will face in 2014, as well as the only non-neutral site ACC away game.  Notre Dame’s visit to Tallahassee is exactly what Notre Dame and the ACC had in mind when the affiliation was struck, and it will be a game all college football fans should have marked on their calendar.