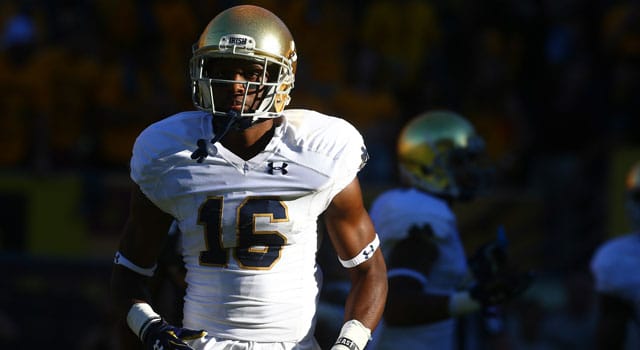 With our normal author of the Shamrock Stickers and Key Match Ups, Pierce O’Leary, unable to pen both weekly columns for the first few weeks of the year, yours truly will be filling in and keeping the columns warm for Pierce.  Until then, I just hope I don’t screw these up.

Since this will be my first go round with both columns, I figured I’d ease into them with a pre-season Shamrock Stickers highlighting some players who really stood out over the summer as the Irish prepare for this weekend’s season’s opener against Texas.

Avery Sebastian – Elijah Shumate’s starting position is probably pretty safe still, but the Cal transfer came in an not only immediately assimilated to his new team but also pushed Shumate throughout camp.   Both Shumate and Max Redfield are reportedly much more comfortable in year 2 of Brian VanGorder’s defense and with Sebastian hot on his tail, Shumate had no choice but to elevate his game.   It will be interesting to see what role Sebastian ends up playing in the Irish defense this fall since he did a good job of forcing the coaches to find playing time for him.

Torii Hunter – No player on the Notre Dame roster saw their stock rise as much as Torii Hunter.  A full two years removed from his gruesome leg injury at the All-American Bowl, Hunter has been one of the biggest stories of training camp for Notre Dame.  It will be interesting to see who is officially listed as the starting slot receiver for the Irish when the first depth chart comes out Tuesday, but even if Hunter is listed behind Amir Carlisle, the junior from Texas is primed to see a lot of playing time all over the field based on comments from Brian Kelly throughout camp.

Equanimeous St. Brown – Speaking of players who saw their stock rise, St. Brown, a freshman out of California, has seen his stock skyrocket over the last month.  Not many tabbed the 4-star recruit as an instant impact player for the Irish this fall, but not a day went by without practice reports of St. Brown impressing.  The true frosh was so good in camp that he likely has played his way into a backup role bypassing sophomore Corey Holmes in the process.  If you’ve watched any practice footage, it’s very easy to why as well.  His routes looks effortless for a big receiver and he uses his body very well.  He’s already been described as a faster Corey Robinson by those who’ve seen him up close and personal.  We should all see him on Saturday.

CJ Sanders – Another freshman who had a great camp is fellow California recruit CJ Sanders.  Unlike St. Browne, Sanders is not gifted with elite height.  In fact, Sanders is one of the shortest players on the Irish roster.  He might be one of the fastest and most dynamic though as well.  Whether it was taking a jet sweep to the house or returning a punt for a touchdown, Sanders made plays throughout camp and it would be a surprise if he did not see the ball a few times this weekend already.

Nick Coleman – The last freshman on the list comes on the defensive side of the ball.  When Shaun Crawford was lost for the season with an ACL injury, Coleman pretty much cemented himself in the two deep.  Even before Crawford’s injury, Coleman was seeing some work with the first defense at times.  With Crawford out, Coleman figures to see the field early.  Even if he doesn’t the fact that a 3-star, unheralded recruit rose up the depth chart and was seeing first team reps in practice is impressive.

Chris Brown – Stop me if you’ve heard this before but Chris Brown had an impressing camp.  It seems like each of the last three years the same has been said and while Brown was solid in 2014, he hasn’t quite broke out like many expected he would.  Always gifted with elite speed, Brown has reportedly improved his all around game and clearly looks like Notre Dame’s #2 wide receiver behind All-American candidate Will Fuller.  If opposing defenses pay too much attention to Fuller and the downfield threat he poses, Brown could make some big plays underneath if he gets the ball in space with his speed.