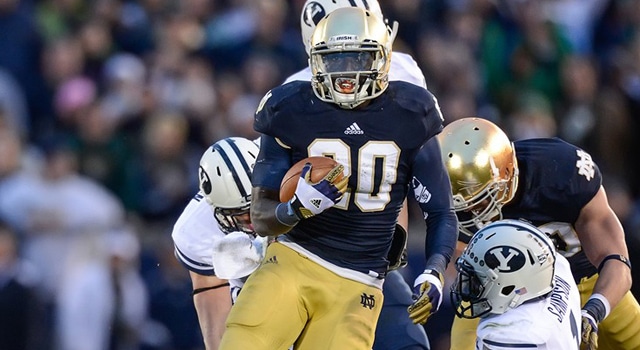 Notre Dame avoided the so called “trap game” by defeating BYU 17-14 to remain unbeaten at 7-0. The Irish were sloppy, struggling to show balance on offense with Tommy Rees failing to pass the ball with any efficiency. However, the defense continued their strong play, pitching a shutout in the second half and the Irish running attack was true to its recent form totaling 270 yards on the ground. The following players were crucial to the Irish victory:

Riddick led the Irish rushing attack with 143 yards on 15 carries versus the Cougars. Riddick had a long carry of 55 yards on a fabulous second effort, in which he burst through the line of scrimmage after looking as though he had been stopped. The run put the Irish on the eight yard line, from which they would kick a field goal that proved to be the difference in the game. Riddick also had a critical eight yard run on a 3rd and 5 on the Irish’s last drive that allowed the offense to stay on the field and eat up more clock.

The second member of the Irish backfield to rush for over 100 yards, Wood rushed for 114 yards on 18 carries. Wood reached the second level of the BYU defense many times and along with Riddick was responsible for wearing down the Cougars defense in the second half, allowing them to capitalize on the final drive where they used up six minutes off the clock.

The Irish linebacker continued his relentless pursuit of a Heisman trophy this weekend in a win over BYU. Te’o once again led the Irish in tackles with 10 and also had an interception in the first quarter. Te’o continues to lead a defense that week after week guides the Irish to victory.

The dependable Irish linebacker had another solid game versus the Cougars. Spond seldom receives any recognition for his quality play as he isn’t a flashy player like many others on the Irish defense. Spond recorded the game-clinching interception against the Cougars to go along with two important pass breakups and five tackles. Spond is just another member of the front seven that will need to continue its brilliant play if the Irish hope to continue to win.