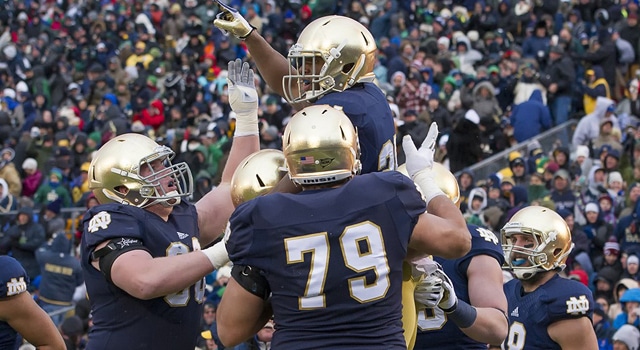 Notre Dame sent its seniors off right with a gritty 23-13 win over BYU.  The Irish had a complete effort with contributions from a host of players and backups filling in admirably for established starters and coming up with huge games in the process.  With the win the Irish move to 8-3 on the season ahead of a stiff challenge versus Stanford.  The following players were instrumental to the Irish getting a bounce back victory:

Notre Dame’s offensive line had perhaps its best effort of the season versus BYU.  Connor Hanratty and Steve Elmer split time at guard and did an excellent job and Matt Hegarty did a great job filling in when Nick Martin went down with injury.  The offensive line helped power the Irish to 235 yards rushing which allowed the Irish to control the tempo of the game and experience balance on offense.

[Related: Nick Martin lost for the Season after suffering knee injury vs. BYU ]

With Louis Nix and Kona Schwenke being injured the door opened for Jarron Jones to contribute and he made a statement.  Jones dominated inside seriously slowing down the Cougars inside running game.  Jones had a career high seven tackles and had a huge blocked field goal in the fourth quarter to help seal the victory.

In what might be his last game at Notre Dame Stadium Stephon Tuitt didn’t disappoint.  Tuitt was extremely active making plays all over the field and chasing Cougars quarterback Taysom Hill around making his life difficult.  Tuitt had seven tackles, a sack, a pass breakup, and three quarterback hurries in the win.

Irish kicker Kyle Brindza had yet another clutch performance in a close victory.  With the game being close most of the way Brindza was able to always keep the Cougars at bay with a clutch field goal to keep it a two possession game.  Brindza was 3-3 on field goals including a 51 yarder in less than ideal conditions.