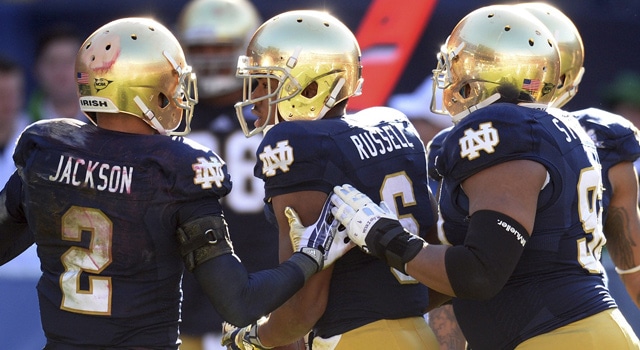 Notre Dame cornerback KeiVarae Russell (6) celebrates an interception against the Rutgers Scarlet Knights during the first half of the Pinstripe Bowl at Yankee Stadium. Mandatory Credit-Joe Camporeale-USA TODAY Sports Images

Notre Dame finished off it 2013 season with a 29-16 win over Rutgers in the New Era Pinstripe Bowl. The Irish looked sluggish in the first half but found their way in the second half and began to dominate the game. The Irish controlled the battle in the trenches as a result of their size advantage and were balanced on offense. Many members of the Irish roster also had solid efforts in what will be their final team wearing the blue and gold. The following players led the Irish to victory versus the Scarlet Knights:

Zach Martin: Fifth-year senior and captain Zach Martin earned MVP honors in his final game at Notre Dame. The left tackle was absolutely dominant in run and pass blocking versus the Scarlet Knights. Martin was the catalyst for the Irish in the second half, setting the tone in what would be annihilation in the trenches. The Irish backs were able to run with ease behind Martin on the left side as he frequently drove lineman into the second level of the defense.

Kyle Brindza: Notre Dame kicker Kyle Brindza continued to be clutch in the victory versus Rutgers. Brindza was 5-6 on field goals ranging in distance from 21 to 49 yards. Brindza’s kicks were especially important as the Irish offense frequently sputtered in the red zone settling for his kicks instead of touchdowns.

KeiVarae Russell: Irish corner KeiVarae Russell thinks he can be the best corner in the nation and he showed flashes of that level of ability versus Rutgers. Russell found himself at a disadvantage matched up against the Scarlet Knights tall receivers but Russell won the majority of one-on-one matchups. Russell broke up three passes and also had an interception on the Irish goal line to go along with two tackles.

Stephon Tuitt: It what may be his last game at Notre Dame Stephon Tuitt came up a strong effort. Tuitt was a problem for the Rutgers offensive line the majority of the night and with the exception of a personal foul penalty played very well. Tuitt had a team-high one and a half sacks to go along with four tackles and was solid in run defense as well.