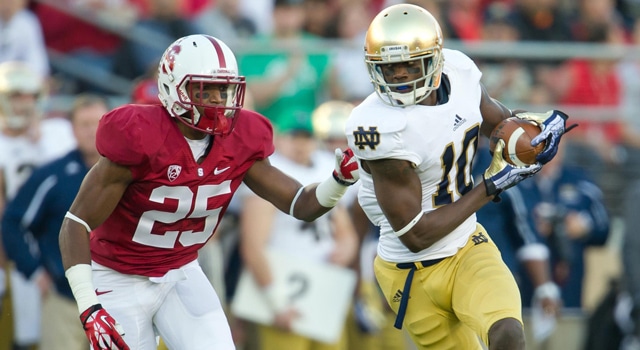 Notre Dame’s frustrating 2013 regular season campaign came to an end on Saturday night with a 27-20 loss at the hands of Stanford. The Irish had opportunities to take down the physical Cardinal but were always kept at bay never stealing full momentum in the game. The lack of a successful run game forced the Irish offense to become one dimensional in the second half which was compounded by the fact they were trailing. The Irish defense put up a solid effort but was too shorthanded to withstand the Stanford rushing attack for four quarters. The following players stood out for the Irish in defeat.

Irish receiver DaVaris Daniels had a strong game in the season finale. Daniels experienced success on the outside to the tune of five receptions for 79 yards and a touchdown. The Irish receiver also prevented a couple of interceptions by fighting off defensive backs on poor throws from Tommy Rees and was fully engaged in the game which he has been criticised for not being in the past.

Irish captain TJ Jones had yet another solid game in his final regular season outing for Notre Dame. Jones had a game-high six receptions for 56 yards and a touchdown. Jones was open on many other occasions but Tommy Rees’s passes either fell short or were off target. Jones also had a punt return for eight yards that gave the Irish solid field position.

Fifth-year senior Dan Fox had a solid game for the Irish. Fox was up to the challenge of the physical Cardinal rushing attack totaling 15 tackles. Fox also had the Irish in the right positions pre-snap on most occasions to combat the Stanford attack. He also had a touchdown saving tackle on Ty Montgomery and was making plays at every level of the defense.

Safety Austin Collinsworth had his most prolific game as a member of the Irish versus the Cardinal. The Kentucky native had 11 tackles and an interception in the Irish defeat. Collinsworth did a solid job filling holes in the run game which isn’t his strength and responded well to a high amount of playing time without Elijah Shumate or Eilar Hardy available to split time with him.