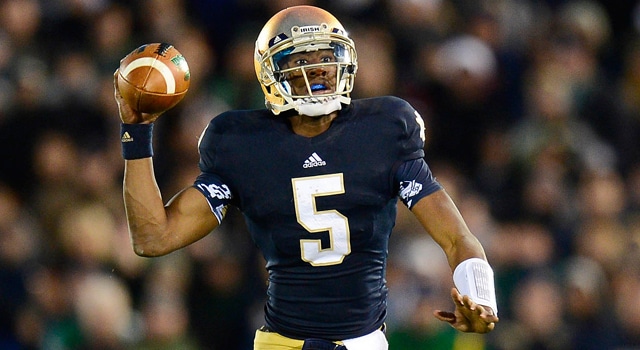 The Irish put themselves and their fan base through an emotional rollercoaster on Saturday, but in the end they triumphed over Pitt 29-26 in triple overtime. Notre Dame moves to 9-0 for the first time since 1993, and hold steady at fourth in the AP and coaches polls. The following players led the Irish to their thrilling victory in this week’s edition of Shamrock Stickers.

Notre Dame’s redshirt freshman quarterback responded to his mid-game benching by leading a remarkable comeback. Golson brought the Irish back from down 14 points in the final quarter, and engineered an incredible two play 50 yard touchdown drive followed by a game-tying two point conversion. Golson led the game-tying drive minutes after throwing an interception in the Pitt end-zone after moving the ball 91 yards on a drive that started at Notre Dame’s two yard line, a prime example of Golson’s resilience. The Irish quarterback was 23-42 passing for 227 yards, two touchdowns and an interception, as well as rushing for 74 yards and the game-winning score.

The Irish’s pass-rushing specialist had a strong showing from his linebacker position. Shembo was a key component of an Irish pass rush that had success, especially on third down. The Irish pass rush hurried decisions by Tino Sunseri and forced Pitt to convert only one of ten third downs. Shembo finished the game with eight tackles, a sack, two quarterback hurries, and a pass breakup in the end-zone that forced the Panthers to settle for a field goal.

The Irish linebacker played a quality game versus the Panthers. Fox’s solid play was needed as Manti Te’o was slowed down due to the ability of Pitt’s interior offensive line to get to the second level and block. Fox is often unheralded as Te’o deservingly receives the headlines, although his game isn’t as flashy, Fox has a nose for the football and is seldom out of position. Fox led the Irish with nine tackles versus Pitt, bringing his total on the season to 47, second only to Te’o.

Notre Dame’s senior running back contributed both running and receiving in the Irish victory. Riddick rushed for a team high 85 yards on 22 carries to go along with four receptions for 35 yards and a touchdown. Riddick took his game to the next level in crunch time as he caught Notre Dame’s second touchdown, which gave Everett Golson the opportunity to score the game-tying two-point conversion. Riddick wasn’t done though as he accounted for 18 of the 25 yards the Irish needed to score the game winning touchdown in the third overtime, 11 of which receiving and seven rushing.