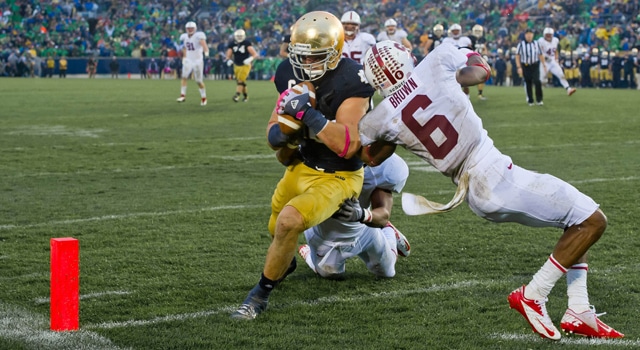 On the strength of a goal-line stand that will go down in history the Irish remained undefeated on Saturday. Notre Dame is now bowl eligible at 6-0 after their 20-13 overtime victory over Stanford. The Irish defense continued its dominating play, extending their streak of not allowing a touchdown to four games, as well as remaining the only team in the nation yet to allow a rushing touchdown this season.

The Irish overcame adversity after trailing for the first time all season, and the following players were instrumental to the teams comeback as we bring you this week’s edition of Shamrock Stickers.

The Irish’s all-American tight-end stepped up in a big way in the late stages of the game. Eifert made an incredible game-tying touchdown catch early in the fourth quarter on a pass from Everett Golson. Eifert also made crucial plays on the Irish’s final drive of regulation, hauling in a pass on 2nd and 15 for an 11 yard gain, and then drawing a pass-interference penalty to move the chains when it looked as though the offense might stall. Eifert’s four catches for 57 yards and a touchdown were crucial to pacing the Irish offense and guiding the team to victory.

Another week, another appearance for Manti Te’o among the Irish’s top performers. Te’o led the team with 11 tackles and was the leader of an Irish defense which matched Stanford blow for blow and won in the trenches when the game was on the line. Te’o also did a brilliant job of helping to contain Stepfan Taylor, holding Stanford’s talented back to 3.6 yards per carry.

Notre Dame’s sophomore safety has done an admirable job filling the big shoes of Jamoris Slaughter. Farley had eight tackles and an interception for the Irish in their win versus Stanford. Farley returned his interception 49 yards setting up the Irish’s first points of the game on a 29 yards field goal. Additionally the North Carolina native recorded a critical tackle for a loss when Stanford was threatening inside the Notre Dame five yard line, forcing the Cardinal to kick a field goal.

Stephon Tuitt is simply a man amongst boys as a sophomore defensive end. Tuitt recorded seven tackles, as well as a half sack, and a critical field goal block. Tuitt was a handful all day for Stanford’s offensive line, recording two quarterback hurries. He also was stout against the run, helping to limit the damage by the Stanford offense.